Disabled people's rights under discussion in Tonga this week

Tonga's justice system will open up public discussion this week (November 7th-11th) on ratifying the Convention of Rights of persons with disability.

The country is celebrating it's annual 'Law Week' and the Attorney General's Office will inform the public of the rights provided in the Convention which Tonga has signed, and how the Convention can be applied in Tonga. 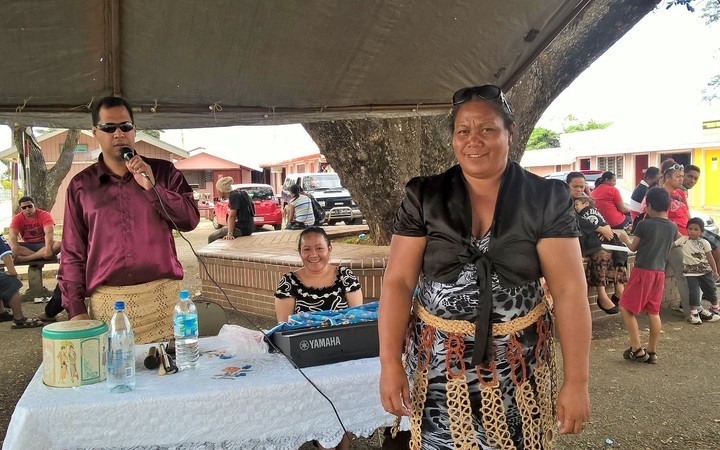 Ofeina Leka and his wife Aki at a fundraising event for the National Visual Impairment Organisation. Photo: Margaret Swift

31-year-old Ofeina Leka was born healthy, but an accident at the age of 11 left him totally blind. He was excluded from the education system and his community, when no school in the country would accept him.

So my parents send me over to Fiji, where there's the School Society for the Blind and I was study there. And up to a stage, my parents can't afford to pay for my school. So I came back to Tonga. Because of my heart willing to complete my education, one of the universities here in Tonga - I went to the principal and I spoke with him and he said 'um, let me think about it.' and I went there for the second time, third time - maybe he fed up of seeing me up here in his office and he said, 'ok, you can come.'

Using a tape recorder, a screen reader, a laptop and braille he found his own way of learning at University and after four years of studying, he graduated with a degree in Business Administration. Mr Leka is now the only blind person in the country who can read Braille and use a computer. He also lives independently, cooks his own food, does his own washing and is now training other young blind children how to read Braille and live independently. He founded Tonga's National Visual Impairment organisation.

I never forget about how hard that I came. How hard, how difficult that I came through. So I have that vision, I should establish the Blind Association here in Tonga to gather the people with visual impairment so we can make a change.

Mr Leka says not even one percent of persons living with a disability in Tonga have access to education and consequently, they make up the largest proportion of people living in poverty in Tonga. He says ratifying the convention is desperately needed.

It is very very important because that's how I think. The people here in Tonga need to be trained to change their attitudes towards disabilities. Because a lot of people say words, you know, using names to the people here. And that really put them down.

Last week she attended a conference in Nuku'alofa to discuss the convention. It was the first of eight phases needed before it's ratification. Ms Peleketi says persons with disability have mostly been supported by Non-Governmental organisations such as the Tonga Red Cross and Mr Leka's Blind Association, with little government assistance. But she says things like accessiblity for persons of disability are slowly improving and pointed out that the country's first marked disabled toilet had recently been built inside the airport.

Tonga are starting to improve that. You know, making ramp in some places, in the shop, and even in the parking lots - they start to sign out things for the disabilities. And I'm very glad that the government had a move on that.

NGOs like Tonga's National Visual Impairment Organisation are yet to receive government support and mainly rely on fundraising events and private donations.

Mr Leka says he hopes next week's public discussions will raise awareness and more government support for the ratification of the Convention.