Study has found the Pacific Islands Forum is still relevant

The Pacific Islands Forum is still relevant, and Pacific countries want New Zealand and Australia to remain in it, according to a new study.

Stephanie Lawson, from Australia's MacQuarie University, has been researching the history of regionalism and the way the forum has evolved since it was formed in the 1970s.

Professor Lawson told Jamie Tahana that she began by looking at the role of Australia and New Zealand. 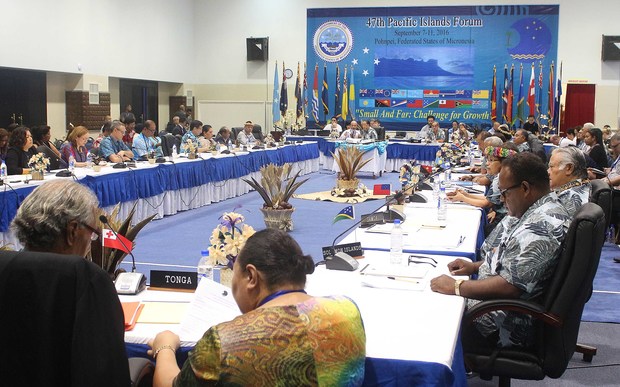 STEPHANIE LAWSON: I was interested in looking at, to start with the issue of looking at whether Australia and New Zealand really can be treated as a single and separate entity, within the Forum from the Pacific Island states themselves. Because that is the distinction I think that people sometimes make. Sometimes I think it might be right to make that distinction, but other times it just doesn't work. I think the relationship between the islands, Australia and New Zealand and among the islands themselves; are more complicated than that.

JAMIE TAHANA: And that has been raised by particularly Fiji in regards to the Forum recently hasn't it? The role of New Zealand and Australia.

SL: Fiji under Frank Bainimarama has been particularly vocal but that is not a view that is actually supported as far as I can tell by any of the other island countries.

JT: What is the role?

SL: Well it goes back. In the research I have been doing I go right back to 1788 when Arthur Phillip set up the first colony in Sydney. And then 50 years later New Zealand became a colony. But in that time there was a lot of activity going on in the Pacific with European Powers coming to and fro and Australia and New Zealand have been very active in the Pacific from that very very early time onwards. And although there is sometimes a bit of rivalry to the relationship, or sometimes people feel that way, they have worked very closely together to establish a form of control over the Pacific Islands region which suits their own security purposes of course. And this has gone on, so that has given them a particular kind of role. That is different from the role of island nations. But it still doesn't mean that you can simple divide off Australia and New Zealand on the one-hand and all the island nations on the other in the contemporary political scene.

JT: So do they belong in the Forum?

SL: I think they do; and I think they do because most of the island nations want them there. That is the reason they still belong, when it comes right down to it. I have been around the Pacific this year interviewing political figures. They might criticise Australia and New Zealand from time to time especially over climate change issues. But none of them want to see Australia and New Zealand out of the Forum at all.

JT: What about the organisation itself? How has it changed over time?

SL: The Pacific Islands Forum, well as you know it was set up in 1971 and it was to provide a venue for political discussions for the independent island countries of the Pacific, along with Australia and New Zealand. But it was set up because island leaders and Australia and New Zealand as well were quite dissatisfied with the South Pacific Commission as it operated at that time. Largely because of attitudes on the part of the French and to a lesser extent the United States because of the resistance to decolonisation and the absolute refusal to discuss political issues. So that is why the Forum was set up at that time. So it is interesting that most recently the French Territories in the Pacific or at least two of them New Caledonia and French Polynesia have actually now been admitted to the Forum as full members. So it has kind of come full circle.

JT: What does this development mean?

SL: Well it can be looked at from a number of perspectives. First, it is an indication that France is perhaps not considered as a colonial power in the same way as it used to be considered. France has shown itself to be a great deal more flexible over the last twenty years in its attitude to its Pacific territories it has devolved a lot of autonomy to French Polynesia and New Caledonia in particular. And the demand, there is still a demand for independence from some groups within those two countries. But France itself has changed and it is New Caledonia and French Polynesia, not France, that has been admitted to the Pacific Islands Forum. Now some people might say, well they are not independent from France so they will always have to do what France tells them to do. But in my interviews recently in New Caledonia the people in governments there insisted that that was not the case and that they do have autonomy to act in regional affairs.

JT: Has the nature of the organisation itself changed in these past few decades too?

SL: Well it has taken on more and more jobs for itself, if you like? It is not just a talking shop, it has a lot of programs it co-ordinates. Other regional agencies, it has got quite a large bureaucracy and there has always been a worry that it duplicates what the Pacific Community already does. But they do work to try and eliminate duplication. There sometimes is a bit of rivalry but there is probably room for the two regional organisations. But to get back to your original question the Pacific Islands Forum has simply grown considerably from its starting point just as any of these regional organisations have grown. So there is plenty for the Forum to do now and in the future and it has probably played a positive role in many areas of development.

JT: Is the organisation still relevant? Does it need to change or anything? What is your conclusion about it all?