A taste of Pasifika in the Bay could aid student learning

The sounds, sights and tastes of the Pacific have been on display at a festival in New Zealand's Bay of Plenty.

But beyond the food and festivities organisers hope the Pasifika Festival in the Bay will help raise student achievement in the region's small but growing Pacific community. 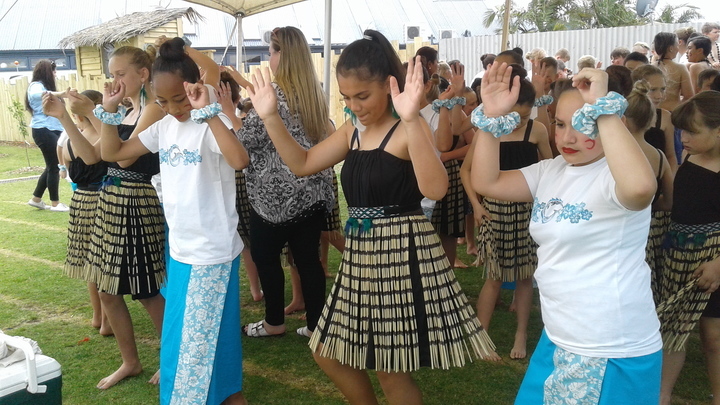 Students warm up for their performance at the Pasifika in the Bay Festival in the Bay of Plenty. Photo: RNZ / Jo O'Brien

Nerve wracking but fun seemed to sum up the feelings of the children and young people performing in the festival. More than 15 schools took part in the event at Arataki school in Mt Maunganui. Harlem Gardiner-Hano from St Mary's Primary School in Tauranga says Pasifika was pretty good.

"Cos we get to show what we've learnt at practices, and we just get to show everybody. And it's just good to be just with Islanders, not always surrounded by Pakehas."

For one of the festival organisers Annette Laban that's what Pasifika in the Bay is all about.

Education Ministry Bay of Plenty Waiariki Director Ezra Schuster says coming together is especially important for the small community in the Bay - with just 15-hundred pupils identifying as Pasifika across the region.

"There are some challenges around that, around the isolation and I think the importance of that Pasifika in the Bay Festival, it's an opportunity for these communities to come together to celebrate their culture, language and identity, but also for the wider Bay of Plenty region to really acknowledge that we've got some fantastic communities out there and it's great to celebrate all of them."

Ezra Schuster says the homegrown event which was initiated by local Pasifika teachers, supports strategies in the Ministry's Pasifika Education Plan by involving parents in their children's learning.

"Evidence tells us that for those communities where their culture and language is celebrated, particularly where there's higher parental involvement and engagement the chances of achievement are higher. So we've seen that at Arataki School with the number of parents, grandparents, uncles and aunties, and wider community members coming to school and being part of the festival."

Ezra Schuster says they're already seeing strong gains in Pasifika achievement results in the Bay of Plenty, through initiatives supporting students and their families. The Pacific Island Community Tauranga Trust runs an afterschool programme attended by parents who work with their children on their studies. The Trust's interim general manager Alex Talopau says the festival is great for the diverse community, which includes people from Samoa, Tonga, Solomon Islands, Tuvalu, Kiribati, and the Cook Islands.

"The parents who are here as well are really embracing the chance to meet other communities as well so it's like a marriage of the different Pacific Island groups coming together as one."

Organiser Annette Laban estimates about a thousand people turned out to support the festival.

"Fabulous feedback, people are just in awe of the colour, the performances, how much food there is."

For the many non-Pasifika children performing in the festival such as Arataki School pupil Anika Shaw, it was a chance to learn a little about what the Pacific has to offer.

This was the second year the Pasifika Festival in the Bay has been held, and with the community growing as more people move down from Auckland it's hoped it will come back bigger next year.