Pacific people are often praised for their artistic ability but feel the pressure to pursue other career paths say arts award recipients in New Zealand.

Daniela Maoate-Cox spoke to the winners about the significance of their awards. 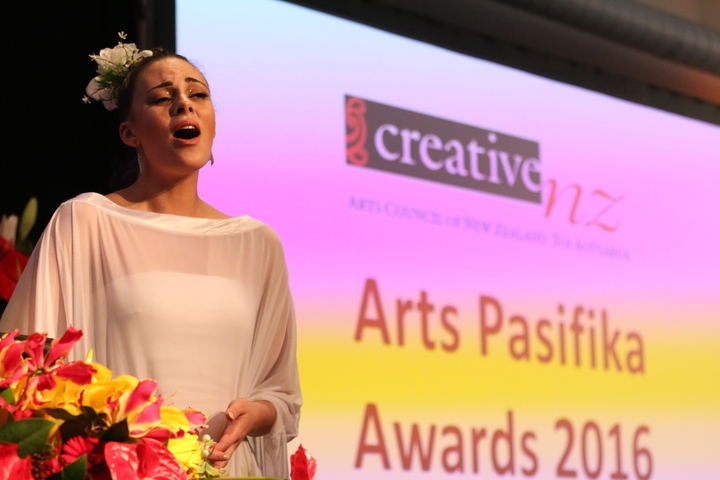 Madison Nonoa started singing at the age of three, charging her family to attend her concerts in the living room

She's the recipient of the Iosefa Enari memorial award and considers Enari one of her role models.

"Iosefa Enari who was a Samoan baritone really pioneered the way for young Pacific Islanders in the world of opera, there isn't a huge amount of us so he did a lot of work in raising awareness."

Madison Nonoa has been training in opera for 14 years and just completed her studies in French, German and Music at the University of Auckland where she was also a student mentor.

She's passionate about helping students focus on their education but says many feel the pressure to let their artistic talent fall by the wayside in favour of a career as a doctor or lawyer.

"Basically every Pacific Islander I've ever met either loves music or has some kind of affinity with it and is very gifted but there's a lot of pressure actually from the wider communities to leave it as a hobby and to do something else which is fair enough in lots of ways but I think there's an enormous among of potential out there and talent that I'd love to see more people coming through."

Changing those attitudes relies on more Pacific role models championing the arts as a skill and a career.

Poet Karlo Mila whose works on Pacific culture, politics, and love are regularly used in school curricula is the winner of the contemporary Pacific Artist Award.

But she says becoming a writer was never something she considered as a job prospect.

"When I was a university student doing a couple of English papers, because there were so few Pacific people, I was included in their promo video, and they were asking my why I took English and I was like 'oh 'cos you know it's good for jobs that you have good grammar' I didn't go 'oh I'm going to write a poetry book one day', I was just very practical and it was just very much out of the realm of what was normal for people around me."

But she says the trend is changing.

"Poems like mine were a bit rare or new when they first went into schools but there are lots of Pasifika voices now that are telling a different kind of experience."

Preserving those experiences is the passion of the recipient of the special recognition award, Kolokesa Uafā Māhina-Tuai.

She is the Pacific project curator at Tāmaki Paenga Hira Auckland War Memorial Museum - a traditionally unfamiliar environment for Pacific people she says.

"It's a foreign space, the actual institution and building itself but in terms of the concepts around display and exhibiting it's not foreign to our cultures you know but we have through various projects we've come to realise that there's also a lack of awareness of and deep understanding of what museums actually do."

She says Pacific communities are starting to realise there are particular roles which safeguard taonga in the musuem but some might be surprised by the items that are chosen.

"You might have a particular work that looks really worn out, someone has worn it and it's tattered but the story and the person that wore it is just as important so we would consider that quite valuable and still acquire it."

The Arts Pasifika Awards started twenty years ago to commend Pasifika artists and showcase their talent to the wider community.

Other reward recipients include Oscar Kightly and David Fane who both won the Senior Pacific Artist Award, Tuaine-Nurse Tamarua Robati who received the Pacific Heritage Arts Award and sound and music producer Anonymouz who won the Emerging Pacific Artist Award.