Full extent of NCDs in the region yet to be acknowledged

The United Nations Food and Agriculture Organisation says the full extent of a crisis of non-communicable diseases in the region is yet to be fully acknowledged.

Tim Martyn, from the FAO's Fiji office, says over the past few decades, many people have shifted from traditional nutrient-rich diets to cheaper foods high in sugars, salts and fats -- an unintended consequence of trade liberalisation.

He says this has led to a generation of Pacific islanders having some of the highest rates of preventable diseases in the world.

Dr Martyn told Jamie Tahana that health campaigns have raised awareness, but they do little when families can barely afford the healthier alternative, which will be the focus of a major conference this week. 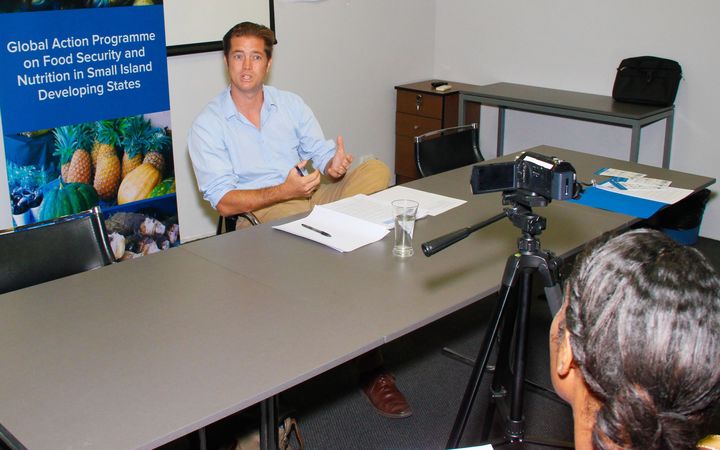 TIM MARTYN: Yeah I think it's an unprecedented level of crisis. In the world, seven of the ten most obese nations are in the Pacific islands, and as healthcare cost as a percentage of GDP is rising - rising faster than the rate of GDP itself - the capacity to cover the costs of healthcare is only getting worse, and at the same time the morbidity, the early deaths and the capacity to earn an income for one's family and for the nation is also declining. So on every level it's an unprecedented crisis and we haven't quite acknowledged that it's only just sort of coming in to the political consciousness.

JAMIE TAHANA: And this isn't so much obesity and over-eating - well, it is a big factor - but a lot of the problem is malnourishment, anaemia and such, isn't it? What you call 'hidden hunger.' What is that?

TM: Well we see a transition of diets in the Pacific over the course of a generation towards different sorts of staple foods. So, taro or kumala being substituted out and white bread or white rice coming in, and they lack the Vitamin A and they lack the iron that used to be part of the traditional diet and so as a result you see these high rates of anaemia which causes a range of health problems. So we have made great inroads in tackling hunger itself in the Pacific, but that's only a small part of the story. What we've seen is a shift in the calorie base or the dietary base away from diets which include the essential micro-nutrients and of course diets which have a lot of salt and a lot of fat and sugar in them. So we may have achieved some gains on hunger, but it's the hidden hunger and the obesity associated with the new diet which is causing a range of healthcare costs which is then flowing into all those other personal and national costs that we're facing in the Pacific.

JT: And this is a direct result of policies over the last decades?

TM: Yeah, I mean I think it is a noble policy to say 'let's make food cheaper, let's help poor households have access to cheaper food,' and effectively we've achieved that through trade liberalisation. But perhaps an unintended consequence of that process has been to incentivise consumers, incentivise households to shift towards cheaper foods at the expense of traditional foods and, as a result of that incentivisation, people have changed their diets; local foods, there has been less investment in improving productivity there, so they've become relatively more expensive and so consumers face a pretty easy choice. You know, buy a calorie in white bread much cheaper than to buy a calorie in say kumala - sweet potato - but then you miss the micronutrients that comes in that sweet potato.

JT: That creates a whole new problem in itself doesn't it? Because people are buying the cheaper, albeit less healthy food, but if you're putting out a campaign saying 'buy healthy food,' but it's, you know, taking half your income, people aren't exactly likely to do that are they?

TM: That's right, and that's what we think hasn't quite been acknowledged. There's an assumption peoples food choices are a personal choice, a personal preference. But price has a large influence over preferences. You may prefer to buy a Mercedes, but you can only afford a Toyota so you've got to go out and buy what you can afford. So households have the diet they can afford to eat, and we can educate and we can inform, but unless you back that up with improved access to an affordable diet - particularly for the at-risk groups - then we're not going to see real dietary change. So that's why we're having this conference next week to bring the scale of attention to this problem and the range of actors required to develop the solutions that the Pacific Islands need, and indeed all small island developing states who are facing similar problems.

JT: I know it's the focus of the conference, but how do you address that?

TM: Well, as I said, we think that there's been a large gap in the supply side solutions which involve agriculture. So you can prioritise policies which invest in particular local staples for the domestic market. We have a range of policy tools. We talked about trade policy, so the Pacific Islands are exploring making certain categories of food and beverages more expensive to discourage people from consuming them and that's worked for cigarettes and alcohol. So at one level you can discourage and therefore local foods become cheaper and more attractive, you can have price control where we try and artificially lower the price of certain categories of food to ensure consumers have access to them. We don't do that for any local foods, we don't generally take a nutrition lens to that policy so that we ensure that people have cheaper access to better quality and more nutritious food. There's also interventions around, you know, promotion of backyard gardening or small-scale agriculture which has not really been the domain of agriculture ministries in the Pacific - they're focussed one exports, agriculture as cash as income, not as food. So changing our approach to how we teach people what to farm and how we farm, particularly at a smaller level is an important new step. And you see some winds in countries like Samoa, who have managed to invest a lot in taro production and achieve a relatively cheaper taro production there.