Ro Teimumu Kepa says the government's ambitious building project is still lagging, despite aims to have schools rebuilt by mid-January for the start of next year's classes.

But the government says there have been unfortunate delays and they are doing their best. 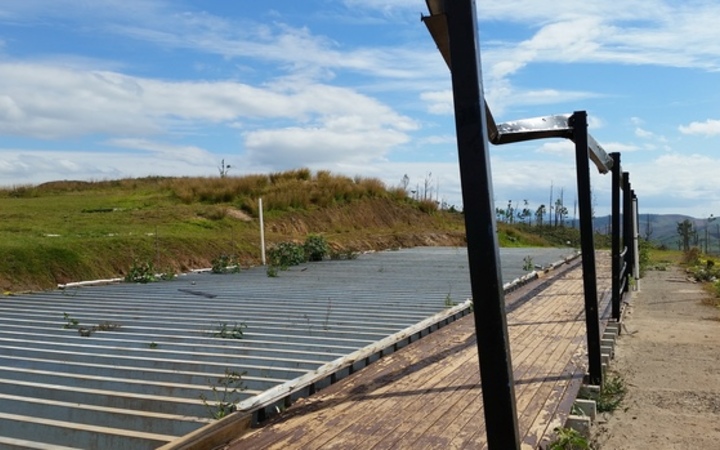 This was once a new classroom... four new classrooms and a toilet block were built here at Nakoroboya school in Fiji a year before Cyclone Winston. Photo: RNZ/ALEX PERROTTET

Forecasters say there are likely to be about 10 named cyclones across the Pacific this season, but have warned that some could intensify, as was the case this year with Cyclone Winston and its 325 kilometre per hour winds. Ro Teimumu Kepa says in her recent visit she saw 19 schools in Tailevu and Ra and only saw one building contractor working on a school removing a damaged roof. She says the tents have reached their lifespan and need to be replaced.

"It's looking very bad, leaking during rain and very hot during the hot sunny weather. And they are sitting in the rain and the water is pooling around their feet  so it's not very conducive to positive learning."

The government has allocated 63.6 million US dollars in the budget for the building project, and last month Australia put out tenders for the rebuild of 85 schools as part of its aid programme. The government wants to finish building by January the 16th, and despite the narrow window, the Minister of Natural Disaster Management Inia Seruiratu, says he is happy with progress.

"We are happy with the reconstruction that's occurring, some of these are unfortunately beyond us, particularly building materials, we've exhausted everything that we have in Fiji and we have to rely on imported building materials. But people are doing all that they can."

But Ro Teimumu Kepa says in the meantime, the Education Minister, Mahendra Reddy, should be looking at replacing tents, but says he is distracted with irrelevant policies such as promising every child a computer or a tablet.

"You don't really need to go into other areas of the school curriculum which is also very important. But mostly it's basic needs and when he is asked in parliament as to what is happening he brushes us off and thinks it's of no consequence and everything is under control."

Mahendra Reddy did not respond to requests for comment. Last month, teachers on Koro Island said the delays were having an impact on the students. One teacher who's name has been withheld said he's not hopeful the deadline will be met.

"We're trying our best but at the moment our students are not coping very well. And the government, I don't know if they're thinking of the people working for the government or not. We're still waiting for what the government will do, mostly after this year or next year."

Families on Koro Island say their children do need the classrooms but they are far more crucial as safe houses when a cyclone hits, and with the cyclone season beginning, they are more urgent than ever.