A co-author of a new report demonstrating the importance or the ocean and its resources to Melanesia says there is a sense of urgency about protecting this asset.

Reviving Melanesia's Ocean Economy: The Case for Action, was launched last week by the World Wildlife Foundation and its partners.

The report tracks the contribution of the ocean to the region in new ways and finds that the overall value of the ocean and coastlines in Melanesia is at least US$548 billion.

The WWF's Jackie Thomas spoke to Johnny Blades about how significant the ocean is to Melanesia's economy and future prosperity. 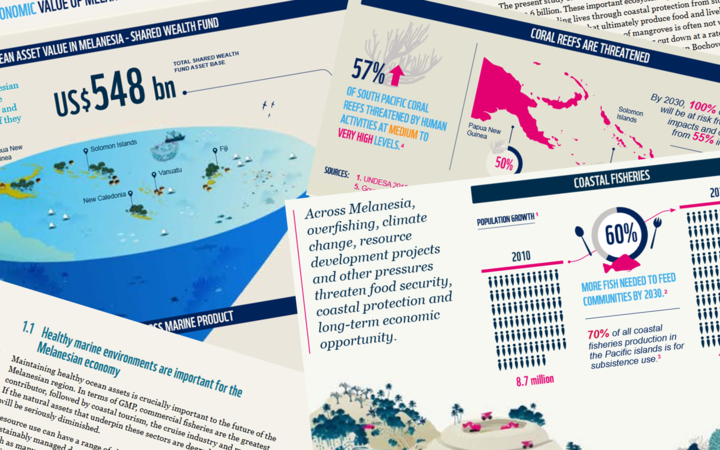 The WWF report Reviving Melanesia's Ocean Economy: The Case for Action has found the overall value of the ocean and coastlines in Melanesia is at least US$548 billion. Photo: WWF

JACKIE THOMAS: So for millennia the countries of Melanesia have been relying on their oceans and so what we wanted to do with this report was to actually try to put some sort of economic value on that so that it would demonstrate the importance to the economy. But also the importance to peoples livelihoods and their food security, their well-being so that is why this report is trying to demonstrate that. But also to highlight that there is a sense of urgency now about protecting that amazing asset that we have. And we actually call it a shared wealth fund.

JOHNNY BLADES: Interesting that you would try to put a value on it, obviously it is an estimate but how can you do that? You have come to the figure of $548 billion US dollars for quote "the overall value of the ocean and coastlines." Why pin it there? What are the boundaries of that estimate?

JT: It is a challenge, these types of evaluations are always lacking in certain areas in terms of data so what we have tried to do through our partnership with Boston Consulting Group is to look at those primary assets that come from the ocean and from the coastal resources. So like the marine fisheries the mangroves the coastal reefs and the sea grass and to also look at what is the coastline providing in terms of perhaps supporting industries like tourism and the value for carbon absorption. And so this is not an exact science. We completely acknowledge that it is an under estimate. A conservative value but it is enough to show that these assets have an enormous value already and so that is why it is worth protecting. Not just because it is economically sensible to do that but because it underpins the way of life for people in Melanesia.

JB: Just a couple of weeks ago I was out looking at a reef off Fiji's coast it is a tourist attraction but it is also a source of food and livelihoods and yet it is being by bleaching and other patterns. So this threat is not just on one single thing sometimes it is not just on food production its sometimes on a number of things.

JT: There are a number, we are lucky in Melanesia it is not too late compared to other parts for example in South East Asia. The marine resources are in a pretty good shape but there are definite trends in certain areas particularly with coastal fisheries. Climate Change is a major potential impact well it is a major impact that is already being felt and countries of Melanesia are already sort of facing greater threats from sea level rise than other parts of the world. There is other threats, over fishing pollution, coastal development but the tourism aspect is important but it can also have an impact and increasing population. So those elements are having an effect not just on marine resources from the food security perspective but also it is undermining the opportunity for those ecosystems to actually protect the coast. So if you are clearing the mangroves then that is reducing the protection against storms and sea level rise. So it is quite a complex area but safe to say these resources are under pressure and we through this report wanted to try and highlight that it is not too late. That through a series of actions, whole of government approaches, partnerships with private sector and communities and so on that we can actually turn things around and make sure that there is a future for Melanesia based on the healthy ocean environment.

JB: How cognizant are some of these Melanesian countries or governments of the threat to these important resources? And how are they equipped to deal with that?

JT: Look the governments of Melanesia and the broader Pacific are very well aware of the importance of the ocean to them. They have already taken a number of very strong measures towards trying to engage in frameworks and commitments that at both the local national and global level. Knowing that they need to protect these. But it is a challenge for the Pacific and the Melanesian countries because they have a lot of competing priorities. So what we wanted to try and do through this report was to try and give them sort of an economic justification for investing urgently into these better management of the marine resources so that they are there for the long term. And to help them understand that you know this is sort of the shared wealth fund or this is the asset base for the region and if you don't make strong and sound decisions on the management of those resources they may not be there in the future. So it governments the idea of weighing up different decisions that they may make in terms of short term use high economic gain but what are the long term benefits of people. So this report helps to provide a bit of that economic perspective.

JB: So would you hope that for instance the Papua New Guinea government might bear this kind of report in mind as it weighs up whether to pursue this deep sea mining venture which you know obviously because of the unknown quantity seems to carry a huge element of risk.

JT: That is correct and I mean it is not just Papua New Guinea all the governments in various ways are facing these kinds of decisions whether it is land mining major infrastructure but of course sea bed mining is a new area and it does potentially bring a lot of wealth but the question is whether you know that wealth is for the long term, what sort of benefits does it bring to the local people and what is the cost of that. So this report helps to try and put that into perspective and also urges taking a precautionary approach to these, to making decisions about such big potentially high impact industries.