A petition has been launched in a bid to halt the planned resumption of phosphate mining on French Polynesia's Makatea atoll.

The mines were abandoned in 1966 but an Australian company Avenir Makatea wants to revive them.

Two associations, Fatu Fenua no Makatea and Rupe no Makatea, want the French environment minister Segolene Royal to intervene to save the island from exploitation.

A member of the associations Sabrina Birk told Walter Zweifel that the latest exploration was done without the consent of the landowners who now fear expropriation. 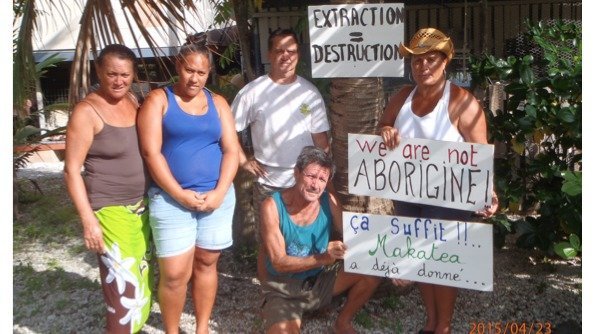 SABRINA BIRK: We have found out that after they had gone around they want the government to expropriate landowners in Makatea in order to give this land to the mining company SAS Makatea, and we found out this. Right now it's like we found out that they want to have this done before the end of the year so that they can start mining next year. So we started this petition to show the government that the landowners are against this project because for them to go and dig around they had to have the permission of the landowners which they did not have. So all of the analyses are illegal. The other problem is you cannot expropriate people if it's not in the general interest, public interest. And mining is not public interest; this is for economic reason, this is for capitalistic reasons. It's not general public interest like it is defined in French law.

WALTER ZWEIFEL: This planned expropriation, is it gazetted anywhere? Is this public knowledge that people can know about it?

SB: We discovered it. The government and the company never made this public. They tried to keep it secret, but we discovered it. We found out and got to see the plan that normally we were not supposed to see. And we saw these are big pieces of land and we know exactly where they are.

WZ: The mayor in [nearby] Rangiroa, or the administration in Rangiroa, they would like this project to go ahead. They say this will create jobs. How big a support is there for the project?

SB: Rangiroa is counting to convince its people to vote for the project. So he [the mayor] would tell his people 'you will have jobs' and so, of course, they would vote for it. But they are not landowners. And we find this unfair that you use people from outside, saying you will have jobs on land that is not yours.