A trade union leader in Fiji says he expects the Fiji police to take notice of criticism by the DPP over last month's high profile arrests and detentions.

The police arrested and detained the six men over the lack of a permit, and allegations of inciteful comments made at the meeting.

Now the Director of Public Prosecutions says there's no evidence for charges and the police were too slow and too selective in their arrests. 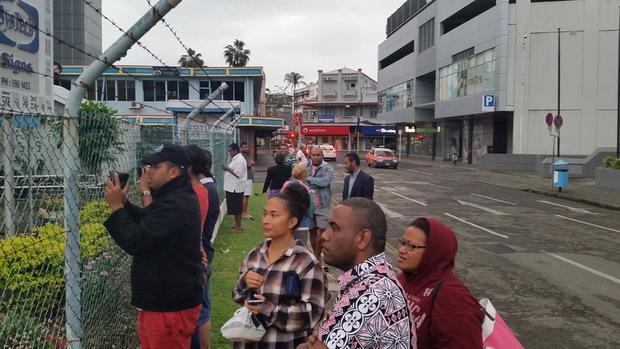 The NGO Pacific Dialogue held a meeting in a church last month to discuss the country's constitution, on Constitution Day.

Former prime ministers Sitiveni Rabuka and Mahendra Chaudhry were invited to speak about past constitutions.

Another speaker was the leader of the National Federation Party, Biman Prasad, who spoke about the difficulties being in opposition in the current parliament.

He says his arrest was blatant political persecution.

"The way in which we were arrested from our homes, in front of our families, and on top of that, locked up in a cell for a night, in our view was unnecessary. It did send a very chilling effect on our supporters and indeed the people of this country."

The former MP and academic Tupeni Baba says the police, while initially unclear about what they were interrogating the men about, were very clear that their instructions came from the "very top".

Tupeni Baba says he suspects the government was disappointed in the turnout to the public events around Constitution Day and may have blamed the small meeting held on the day for affecting the turnout.

"Without a permit, any such meeting would be viewed as an unlawful gathering and the police acted accordingly. Several people were detained for questioning. Their human rights were respected. No one was beaten and no one was manhandled."

But the DPP now says police were too slow, taking five days to make the arrests, and they they were also too selective in who they arrested. Christopher Pryde also said police have powers to shut down such meetings should they be genuinely concerned.

The trade union leader Attar Singh says there were police in attendance, recording the event, so they clearly knew about it well beforehand.

He says he hopes the police commissioner takes note of the decision and the comments.

"These are very very serious and I would like to think that the authorities, and in particular the police commissioner will take cognisance of that. The people who were arrested were all supposedly high profile individuals and all other persons who attended were not even interviewed."

Biman Prasad says he will be consulting his lawyers on the precedent that has been set, and what can be done to encourage the police to improve their conduct.

The Police Commissioner, Sitiveni Qiliho could not be reached for comment.