Samoa's Chamber of commerce is optimistic that the country will be able to fill the gap left by its largest private sector employer.

The automotive component manufacturer, Yazaki, announced this week that it will shut down by the end of next year putting 740 people out of work.

The Chamber's CEO, Hobart Vaai, told Indira Stewart they are working with Yazaki, and government and private sector partners to minimise the impact the shut down will have on the country's economy. 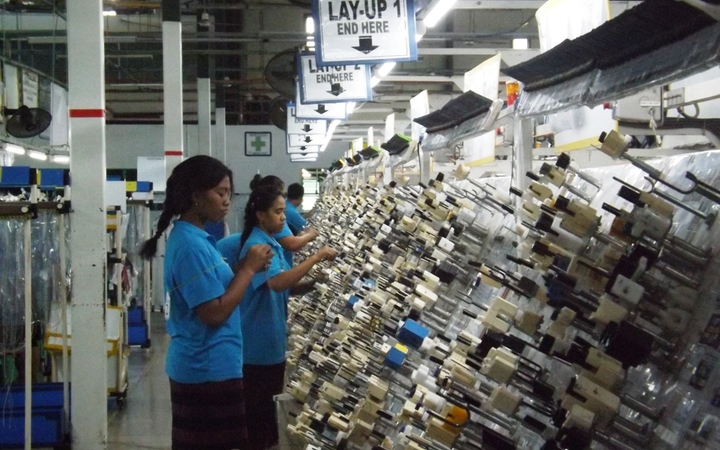 Yazaki Samoa, which employs over 700 people, will close its Samoa operations by the end of 2017. Photo: Supplied/Autagavaia Tipi Autagavaia

HOBART VAAI: We're working as much as possible in assisting in the transition process, looking at areas such as job creation and also small business development and really looking at encouraging entrepreneurship and providing opportunities for those who will be transitioning from unemployment into looking at other areas to find them employment moving forward.

INDIRA STEWART: In recent years, Yazaki has produced nearly 70 percent of total exports and around 6 percent of the country's GDP. That's an enormous contribution from just one company alone. It's going to be quite hard to match that. But the government is optimistic about filling those gaps?

HV: Well, we have to be. From the private sector point of view it is an issue but you know, we're looking at all other - we're exploring all avenues. We understand that the stats that you talked about but since we have this gap in time to look at all the ways possible that we assist in the transition in the process, and looking at job creation. Like I said, we're being positive about the whole thing and we're aggressively moving forward. You know we have a small limited amount of time but the most important for us is to start exploring all avenues for job creation and small business setup. We're looking at the Coco initiative we have on at the moment, encouraging some farmers to go and replant coco. And at the moment we're just scanning through our networks. We're putting together some programs, so we can start the process.

IS: What's the general reaction been within the Samoan community to the news?

HV: Well what we've received so far from our members is basically shock. But you know it's not too much shock because it's been talked about in the last two or three years. And the private sector itself has been looking at ways to alleviate this, looking at possible other ventures. But I would say that we have been looking at and been prepared for this. It's shocking but you know, we're just staying positive. At this time we're pulling together. We're pulling together not only for the sake of Yazaki employees and the impact it will have on our economy, but we're staying positive and we're going to work hard and aggressively to ensure that the impact is minimal, and hopefully, none at all.