Island entrepreneurs pick up new ways to use fish bycatch

The first regional training for small-scale tuna canning entrepreneurs is taking place in the Marshall Islands this week.

The Parties to the Nauru Agreement is hosting the workshop to encourage and certify people to enter the canning business in order to make better use of resources and provide greater food security. 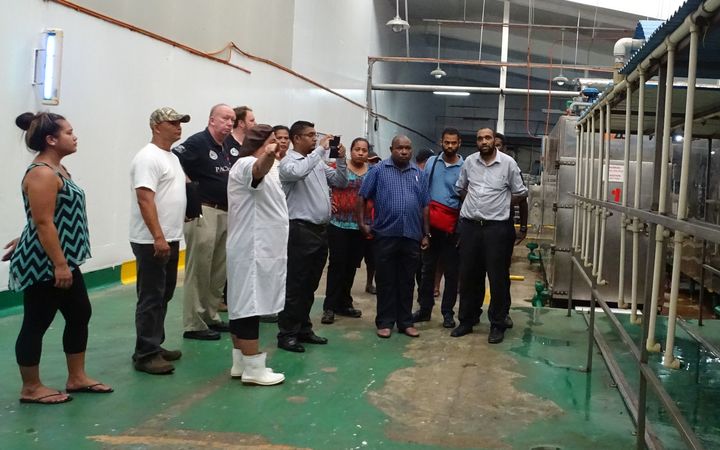 LUDWIG KUMORU:  There is a lot of bycatch coming from the fishing boats, because of the rules that we have put in place before which says that all catch has to be landed unless they are unfit for human consumption.  So there is a lot of fish that the canneries don't need.  That is one of the objectives, to make use of the product that is coming out of the fishing boats in the transhipment hubs.  So that can now be utilised by people who are thinking entrepreneurial, so they can make something for themselves.

KORO VAKA'UTA:  Basically being more efficient and making greater use of the region's resources?

LK:  Basically what is coming out from the fishing boats, they have bycatches like Rainbow Runners and some other fish that is not being targeted, it is not going to the cannery so it's affordable, they can get it cheaper, almost at no cost, they can get a fish and slice and make something out of it.

KV:  Why do you think it has taken this long, this whole idea to move away from this mindset, as you have said, a mindset of dependency [on larger corporations] when it comes to the fisheries?

LK:  The thing is, we have always looked at very big things, big things, but most times we are scared because we think 'it's big, it needs a lot of money', so we always have this mindset that 'I can't do it'.  I think that is the thing that has to change.  People have got to start believing that things can be done.  You don't need to do something big.  You can start from something small and you grow it.  That mindset thing is something that has to be addressed first.  Most of the people doing canning now, they are not government officials.  They are actually people who are already doing their own business, be it markets or small eateries or this sort of thing.  So basically they are not directly involved in fisheries.  Also in a way it also helps them think about other products they can include in their line of business.  Down the line sometimes we will have to run courses for these sort of people.  They don't necessarily have to be involved in fisheries.  It can be any person doing some sort of a business, be it their own small takeout business but try to help them think that way so one day they can go from that and they might end up actually doing some business in fisheries.  So with this canning thing, the objective is not only to can fish, but you can fruits and also other things.  In Majuro we also can pandanus juice and breadfruit, all this stuff.  So it's really about teaching the people skills that they can look at as their business options.

KV:  This can be done in any of the islands, any country?

LK:  It can be done anywhere.  This is very small scale, like, in one go you are maybe talking about 55-60 cans and if you organise yourself with two or three people, in that day you can produce 400 cans, 500 cans, but that is still a lot.  If you do that, you can still sell it locally, provided it meets the food standards and that sort of thing.