The Australian appointed administrator to Norfolk Island is believed to be in London courting backing for his government's controversial removal of the island's autonomy.

As of July this year the government of Norfolk was reduced to a regional council, but many on the island remain opposed to the actions taken by Canberra.

Last month a group of British MPs visited the island and voiced support for those wanting their autonomy back.

The administrator Gary Hardgrave is now understood to be in London, and the spokesperson for Norfolk's People for Democracy group, former chief minister, Andre Nobbs, says this is unusual, given the island's administrators are typically apolitical. 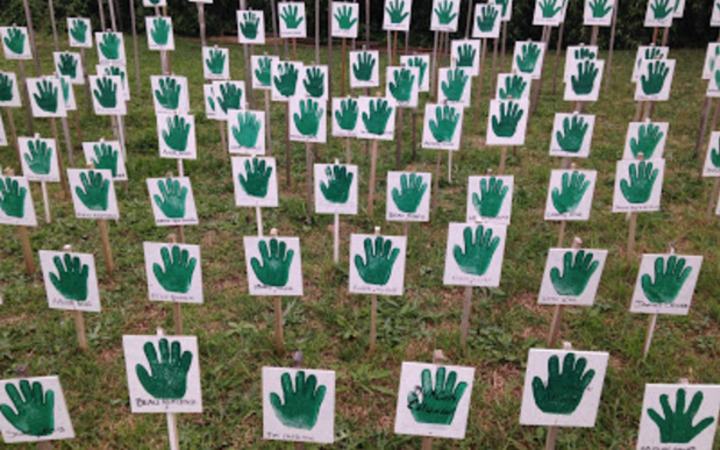 Hands up for democracy protest in Norfolk Island Photo: Facebook: Norfolk under siege

ANDRE NOBBS: It's unprecedented and it demonstrates I think a little bit of the desperation of the Australian government to justify what's been going on on Norfolk Island particularly as I say there's been an independent cross-party delegation from Westminster parliament to Norfolk Island.

DON WISEMAN: A poll has been conducted, I guess you could say it's been conducted by one side rather than an independent body but it still gives an indication of the continuing enthusiasm for people to have Canberra rethink what they've done.

AN: Absolutely and I can tell you that polling was carried out at a public meeting when the British MPs were on the island, and the entire community was invited so it wasn't a polarised invitation to say 'only come if you feel this way or that way' and out of those attendees the survey results definitely showed that the people of Norfolk Island were absolutely not happy at the treatment that they have had at the hands of the Australian government or the representation by the Australian government or their representative.

DW: Norfolk Island had been pushing for a number of reviews of Canberra's moves at various international bodies like the International Court of Justice, the United Nations and so on, what sort of success have you had?

AN: The United Nations petition process, Geoffrey Robertson has been a major driving force in that with us as well as several other eminent professionals in that area and at all levels that we've spoken to in the United Nations and in the Human Rights Committee for example, we've had nothing but support, we've had not one negative comment to say that we're going about this the wrong way as a people and in fact senior agencies uphold the fact that the Australian government is in breach of the international covenant of civil and political rights as well as in breach of United Nations charters.

DW: I suppose it all comes down to what politicians are thinking in Canberra, have you sensed any movement there?

AN: Ys we have, well I guess I need to point out that we've exhausted all the domestic remedies through Australia. We've attempted to go through the Commonwealth ombudsman, the administrative appeals tribunal, we've attempted to use the Senate, the House of Representatives, every available mechanism has been attempted by the people of Norfolk Island and in every opportunity the Australian government appears to have shut down every one of those options for Norfolk Island people so we haven't had access to independent review or natural justice in any of this hence the reason we've engaged with the parliamentarians from London, hence the reason we've engaged with United Nations in New York, the Human Rights Committee and various other agencies throughout Europe and in particular England.