Focus on safe houses in Fiji ahead of cyclone season

Aid organisations in Fiji are aiming to build category four and five standard shelters in badly-hit locations as another cyclone season nears. Koro Island was struck by Cyclone Winston in February, claiming eight lives on the island, and wiping out most of the houses. While volunteers have been working hard for months to set high sanitation levels, many families are still struggling from a lack of food and basic items.

Alex Perrottet was there. 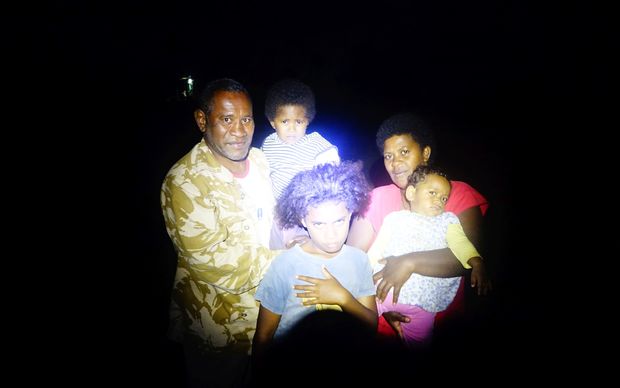 (Sound of wind) That's the sound of 325km per hour winds, and a house being picked up and disappearing in the storm, taken from a video from the Think Pacific volunteers in Tuatua village in Koro Island. Now, building supplies are arriving in proper quantities for the first time since the February cyclone, and they're being welcomed with open arms. Families have been living in tents that are now leaky and covered in mildew. A school teacher at Koro Island High School, John Rounds, says it's been a tough six months.

"It's very sad to see the students, without classrooms, learning in the tent, during the hot and sunny weather. It's very hot inside the tent, we cannot teach properly. That's all that happened to the students. We're still waiting for what the government will do so mostly after this year or next year."

But schools will have to wait longer, because for now, homes are a priority. The chairman of Naqaidamu village, Niko Komainavoka, says they have received some materials, but are waiting until higher land is properly cleared for new homes, and that's going to take serious government intervention, and time. The next cyclone season could start within weeks and he says Naqaidamu doesn't have any safe structure.

"Safety plan is rebuilding what we've got right now, we have to have a safe house just in case the hurricane season comes. At the moment there's no safe house, maybe there's a concrete house there, just fix it up and stay there."

Down the road at Nasau village, where five people died in the storm surge, ruins are still scattered everywhere. But there's a shed with piles of wood, that has been cut from local forests. Chief Kilione Tamani says he used primitive methods of rolling logs to collect a lot of the trees that Winston cut down, and a portable sawmill that he's now lending to other villages. His words were translated by Oxfam aid worker Elazar Duiabe.

"They have to pull, hundreds of metres, big logs, with ropes. They pull it towards the sawmill then they cut those timbers then lift it to the roadside and then the trucks pick it up and come and store it.
But this is a wonderful story of people helping themselves and not relying so much on government isn't it?
This is their own initiative, they want to do this for themselves, to quicken the process."

But Rusila Delagi and her brother Turakai are living in a tiny corrugated iron hut next to where their house once stood. All that's left is the fireplace and chimney.

"Have you the materials for your new house yet?
No.
No, still waiting?
Still waiting.
And when will it come?
I don't know
You don't know.
And did you lose anyone in your family in the cyclone?
No.
Where did you run?
I run right up there
To the health centre?
Yes."

The chief says he too is waiting for land to be cleared to build new homes, and families like Rusila's who live close to the shore will have to relocate. In the meantime, the Director General of the Red Cross, Filipe Nainoca, says he's coordinating with Habitat for Humanity to make sure each village has something to gather in should a cyclone hit in the coming months.

"We are working to ensure that at least in one community, one home is built that will be safe, that can take the cyclone and can be used as a shelter. So that's the current strategy that we have at the moment."

He says they will build 50 shelters around the island, and will train local carpenters, with detailed plans for small houses measuring four by six metres.

"What we are going to do actually with this project is to also train community carpenters how to build back better, how to use these building materials to build stronger, sturdier buildings that can withstand at least up to category four, five cyclones."

Dr Ravneil Singh was sent to Koro for his first placement three days before Cyclone Winston struck. He says the Fiji Red Cross Society, Oxfam and All Hands Volunteers have successfully built temporary toilets, and he's amazed at the low level of infections, but he hopes the new homes have more permanent toilets.

"We are targeting water-sealed toilets, so there's multiple NGOs that's helping with the waste disposal so I suppose that's going well. I think the main thing now is housing, houses. So that [lack of housing] leads to sanitation, infectious diseases, typhoid and things like that, vile hepatitis."

Groceries are also arriving at the Koro Island store, but one family says they they don't have the money to buy them. Kameli Karavaki is a farmer and says taro and cassava are vital for Fijians but they are yearly crops and many of them won't be ready until halfway through next year.

"We need more planting and we need more food. The food rations being distributed to all villages, in this village, plenty house don't have any food. October, November, December, only the leftover food from the farm, will take us. But next year will be a big problem."

"Rice, flour, sugar, laundry soap, like that. There's a store here, the only problem is we don't have money to buy. It's very tough we don't have much money."

Volunteers have been on the island for months, living in tents. Reuben Grandon directs the All Hands Volunteers and says it's a relief to see the materials coming in, as they are heading out.

"The tarps and tents are kind of at their end, it's been about six months or so since they came in so it's good that Red Cross has more tarps to distribute and it's really good to see more permanent building structures coming in."

Filipe Nainoca from the Red Cross says they are sending emergency supplies in containers to islands like Koro and badly-hit Vanua Balavu, so they are ready for the next big storm. But Koro is still in emergency mode, and will be for a long time.