Australia's government has been trumpeting its border protection policy to the world community as leaders converge in New York for the UN general Assembly.

The prime minister Malcom Turnbull and Immigration Minister Peter Dutton have described Australia's policy, including the controversial offshore processing of asylum seekers who arrive by boat, as a model for other countries.

A lawyer who has represented refugees, Eric Vardalis, says he's embarrassed to call himself an Australian when the government says such things.

He told Johnny Blades that allowing the mistreatment of refugees and asylum seekers on Nauru and PNG's Manus Island is a disgrace, but that the majority of Australians support it. 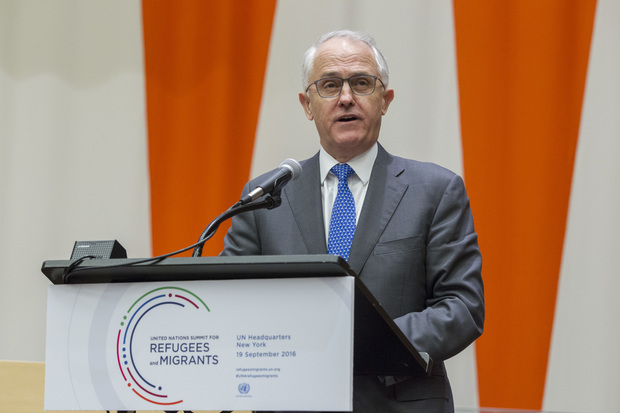 ERIC VARDALIS: And the government feeds off it. The government  encourages it.  We've had our Attorney-General come out and say it's ok to be a bigot. We've got Pauline Hanson saying I hate Muslims, I don't want Muslims here. You know they seem to think refugee equals terrorist, muslim equals terrorist; if you're not a white anglo-saxon protestant, you're a terrorist. And the public love it.

JOHNNY BLADES: So Peter Dutton has got a popular mandate then? What do you make of him saying Australia is a world leader in investing in refugees? because there has been a lot of money spent, for instance.

EV: Look, the guy's a legend in his own lunchtime. They are spending billions of dollars on Nauru and Manus. And why? There's no need for these people to be there. We spend 4 billion dollars on refugees on Manus and Nauru. That money could build hospitals, roads, schools, social services. Both major parties, both the Labour and Liberal parties favour offshore detention. So when you've got 85 percent of the population vote favouring offshore detention, what hope have you got? I mean the Greens are the only ones in this country - they've got eight percent of the vote - they're the only ones that are against offshore processing. And by the way, I think 92 percent - on last count - of these people on Manus and Nauru are genuine refugees. They've been assessed. It's not that they are not refugees, they've been assessed but they can't go anywhere.

JB: And David Adeang, the Nauru minister up there at the UN, did say that there is a problem with resettlement. Nauru clearly doesn't want these people (to stay) longterm. I don't think the people necessarily want to be on Nauru either.

EV: Nauru is a failed country. They grow nothing, they import all their food. Australia props it up. If it wasn't for Australian money, these people would have nothing to eat.  Of course they're going to support Australia, and everything Australia says. It's ridiculous that we have a prison on Nauru, it doesn't make any sense.

JB: So you'd like to see them brought to the mainland as soon as possible?

EV: I would like to see that genuine refugees who have been assessed by international standards are let in to Australia, yes. Now I understand that New Zealand has offered to take some, but Australia said no, we're not prepared to give you any. That I don't understand either.

JB: In your dealings with some of the people who have been detained on Manus or Nauru, the human cost of them being there, it's substantial isn't it?

EV: Well, they're in jail. They're in jail for doing nothing wrong. They've got no idea why they're there. They can't go back (to their home countries) or they'll be killed. They're not safe to go back where they came from. And you've got a government and an opposition that says no, you're never going to come to Australia, and nowhere else. Who is going to take them? I read recently that Italy got 40-thousand refugees in one month. Australia offered to take 12-thousand Syrian refugees and yet almost a year later I think only 1800 or so have come to Australia. Why? They just say things to look good. They (government) are just pandering to the Australian public. They shouldn't be exacerbating the racist problem. They should be saying to people, look these are genuine refugees. And it's ignorance - no one's ever met one, no one's ever met a refugee. They (Australians) think they (refugees) are all terrorists, every one of them, even the kids.