New asbestos discovered after a hospital fire in Solomon Islands has sparked a call for a Pacific-wide ban on the toxic substance.

The call from the regional environmental body SPREP comes because the Gizo hospital in the Western Solomons had been cleared of old asbestos in a regional study conducted prior to the fire.

Local inspectors however identified asbestos materials at the site in the aftermath of the fire on the 22nd of July.

This was confirmed by experts from the Pacific Hazardous Waste Management Project (PacWaste) who helped to clear the site.

The team identified new building materials used in recent renovations at the hospital as the most likely source of the contamination.

PacWaste project manager Stewart Williams told Koroi Hawkins the cost of cleaning up old asbestos in the region is already daunting without more being imported. 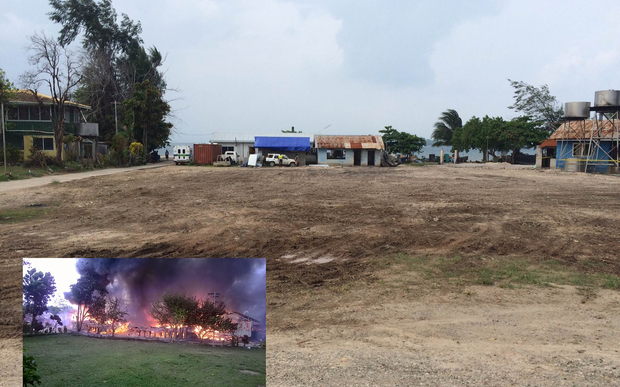 KOROI HAWKINS: It's seems incredible to me that something that's widely known to be hazardous is not banned across the region, is that just an oversight or is that common over the world?

SW: I think what's happened is it's because there's been a change in where materials are manufactured in the world and whether asbestos in materials were included or not included. I think most of the products in the 1980s and 1990s, that came into the Pacific, and came into many parts of the world, they're actually manufactured in OECD countries and most OECD countries have banned, they do have national asbestos bans, there're 57 countries world-wide that actually have national asbestos bans and for other countries that did not put a ban in I think they thought it was a problem of the past and so therefore the need to put forward a national ban on imports coming in didn't seem to be something that you needed to do, it seemed what you needed to do was to deal with the stockpile you've got. But that's all changed now and of course many many products that used to flow into the region from Australia, New Zealand or the US now actually come from Asian countries, which many of them do not have an asbestos ban, they don't have a problem with using asbestos materials and so the Pacific has been caught flat footed a bit, they don't have bans on it. New Zealand didn't have a ban either until their consideration of putting a ban on it now which will come into effect in October.

KH: And Australia as well?

SW: Australia's had a ban for some time but I think what we can see is the origin of materials coming into the region and actually globally being produced globally in new manufacturing bases that don't have asbestos bans, it's a game changer and so now the consideration that asbestos was a contaminate of the past is no longer true. What I didn't state was of course, the baseline study, the regional baseline study that has been conducted, that's been conducted as part of the European Unions' PacWaste project and so that's all together under the PacWaste project, we're spending about $3.5 million on asbestos and that's a combination of the baseline studies and probably about $2.5 to $3 million on physical interventions and those interventions they're targeting the most vulnerable schools, hospitals and areas like that but it's a drop in the ocean because that's expenditure on removing about $3million on public buildings is quite small compared to the total cost of asbestos removal in the Pacific which we've gauged would be around $150 million US and that doesn't include Papua New Guinea or East Timor and it doesn't include islands that we haven't visited yet.

Asbestos is not banned in any Pacific country and even New Zealand is only bringing in an asbestos ban later this year.

According to the World Health Organization (WHO) asbestos related diseases are responsible for more than 100,000 deaths each year.

The topic of a Pacific-wide ban on the import of asbestos products will be discussed at the upcoming Twenty-seventh SPREP Meeting of Officials to be held in Niue from 19-22 September, 2016.