Ensuring development projects deliver benefits for women as well as men is a passion and a vocation for Imrana Jalal.

The women's activist and lawyer from Fiji now works for the Asian Development Bank, helping to ensure aid projects in the Pacific are designed to empower women.

She's just been reviewing a sanitation project in Kiribati and a cash power scheme in Samoa.

Sally Round caught up with Imrana Jalal in the Samoan capital Apia last week. 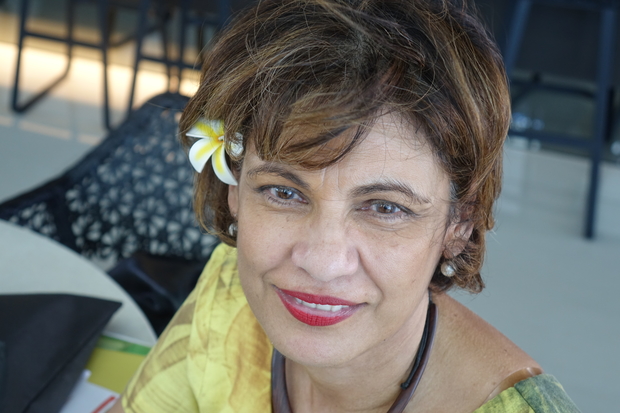 Imrana Jalal is a women's activist and lawyer from Fiji who works for the Sian Development Bank. Photo: RNZI/Sally Round

IMRANA JALAL: Santation's a huge issue in Kiribati because it's an atoll and so the whole issue of providing clean toilets and sanitary conditions to households is a gargantuan problem so my involvement was to look to see whether the gender action plan, the gender designs we put into the project originally, have been implemented and if it's not being implemented what the problems are.

SALLY ROUND: When you say gender designs, what does that mean?

IJ: First of all that women are involved in the process of deciding how sanitation will affect them. Things like open defecation are a huge problem in Kiribati. That has consequences, you know women don't have toilets in their homes and they have to find places to go and so their human security's an issue. You know, they have to take the children to go to the toilet at night, get up three or four times ... you've got five, six children ... so when we say gender designs we have to think about how can we design the project in such a way that responds to the needs of women. There's several issues, one is providing pipes for sanitation, the second is toilets in the homes so women feel secure to be able to use sanitary facilities in their own house. It's such a massive problem and I'm not saying we're solving it but we're trying to help in little ways. So one of the things I was doing was to look at whether or not providing sanitation to women actually decreases their time poverty because they're responsible for looking after that situation and if their needs are not met then that means they can spend hours a day dealing with the problems. We know if women have toilets in their homes that are actually  clean and functioning then it can save women lots of time because the option is illness, disease and so on and then women are left with the burden of looking after the sick. One of the gender designs we built into the project is hygiene awareness. Simple things about keeping yourself clean and washing hands with soap means that there's a dramatic reduction in illness in that community. One particular settlement was a settlement of over 6,000 people and we did a targeted focused campaign in that village, that settlement, and found there was a dramatic decrease in diarrhoea for example, more than 50 percent. The ones where the provision of sanitation in the household and water are direct and it's coupled with awareness, that's where it works. Otherwise you get a toilet and one day it's blocked up. I talked to some of the engineers and they're telling me they find rubbish and people literally don't understand what a toilet is for.

SR: And in Samoa?

IJ: Again a project sponsored by DFAT (Australia's Department of Foreign Affairs and Trade) and ADB (Asian Development Bank) and JICA (Japan International Cooperation Agency) and that is looking at a power project.  Looking to see whether the provision, the improved continuous supply ... they've got this innovative system here in Samoa called 'cash power' where you get a meter. You buy your supply on a card, you then monitor how much power you use and in most households the costs have gone down more than 50 percent. Number one, women have got more involved in it in terms of controlling supply and teaching their families not to waste supply.

SR: How would the sort of information you're collecting be built into future projects in the Pacific?

IJ: This project that I'm looking at, we didn't actually have any specific gender designs in it. We're just looking at what the impact is on small women micro entrepreneurs. Now that women have access to electricity and now that they know how much the electricity costs, what have they done with it? And what we've found is that women have started little shops, little businesses. The provision of energy, coupled with this cash power system has been really important for them in being able to start their small micro enterprises.