Six prominent opposition figures in Fiji have been released after being held in custody over the weekend.

The police are investigating a meeting they say was held last week without a government permit and that some things were said that police were not happy about.

Alex Perrottet is in Suva and Don Wiseman asked him what is known about these purported comments. 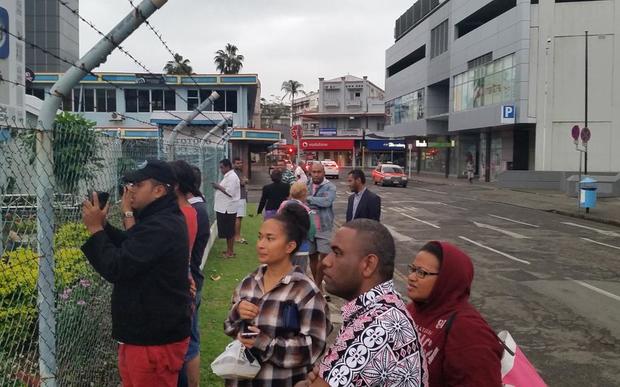 ALEX PERROTTET: Well there is speculation about the comments because there was just a lot of talk about the constitution but nothing new in terms of what people have been saying on the public record even in parliament with Biman Prasad complaining about the behaviour of the government and how difficult it is to work with them. The fact that he was removed from the public accounts committee. But the speculation on what the police might have been zoning in on in terms of inciteful comments that affect the national security of Fiji, there was one part of the recording I think it was Sitiveni Rabuka saying well this behaviour by the government may blow up in their faces and then Biman Prasad might have repeated what he said. There is some speculation about that is the way the conversation went and that is how it was recorded and they were in a sense laughing a little bit saying that perhaps that is what the Police were using to say that perhaps they were not meaning that in a secretive way but really I mean that is as tenuous as it is. There is really nothing that was spoken at this, real private gathering at the end of the day with only 20 or 30 people. And there were questions at length as you say, everyone spent a night in jail didn't get any sleep and talked amongst themselves. They were in good company but as Biman Prasad told me not a very dignified place.

DON WISEMAN: There haven't been any charges as yet is it likely there will be?

AP: Well no one is really talking about that and I am sure that is because they are quite worried there might be. This is a very lengthy questioning and that the file is now been sent to the DPP. Biman Prasad told me he expected to being kept at least another night in jail and to be released after being charged this morning. But at the last minute, quite late last night they were released without charging and said look the DPP will review this. So I think the authorities have bought a little bit of time to review this and to see whether indeed there is enough evidence to bring charges even under the public order decree. The men's lawyers say there is just no basis there there is nothing in all the recordings that could constitute anything about utterances that could damage the national interest and security. So while the lawyers say they are standing on solid ground the individuals themselves are pretty worried that there may be some charges coming.

DW: Now parliament has resumed today. The president has made a grand speech I understand belatedly but he has called on MPs to put the honour back into honorable among other things.

AP: That is right it was a speech that went right through the, it sung the praises of Fiji in terms of its record seventh year of economic growth and financial stability. It talked about the tropical cyclone Winston and how the recovery was going and sung the praises of the Fiji sevens team and thanked people that were there from the diplomatic core. He did say that there would be a review in this half of the parliamentary term of certain legislation the first one he mentioned was this public order decree and so there were some indications there that there may be some law changes and that finally Fiji might be getting up to speed and removing some of those draconian bits of well not legislation really but decrees passed under military rule in the post coup years. And of course we had the National Federation Party members boycott today's parliamentary opening. The party president who is suspended from the parliament Tupou Draunidalo did not mince her words. She said the MPs weren't elected to be props for the Fiji First government's farcical democracy and she listed a litany of  complaints about how the government has trodden all over the democracy that it purports to uphold here in Fiji.

DW: There have been some suggestions that a number of those moves made by the Fiji government over the last few days were just intended to disrupt the Pacific Islands Forum. We had the decision about the PACER-Plus deal that Fiji wasn't happy with that. We had a cabinet reshuffle and then we had these prominent people within the opposition who were arrested. Were they trying to undermine that or just make a little statement?

AP: Well you would certainly have to suggest that there was an intention to undermine Ratu Inoke Kubuabola who was the Foreign Minister and representing Fiji at this important forum and during those days his portfolio was taken from him. He is actually on a much longer trip which has now been cut short because he has been moved to the defense portfolio and Frank Bainimarama takes over Foreign relations and everyone is literally on tenterhooks to see what that really will involve because he is not diplomatic compared to Ratu-Inoke and it is on the public record what he thinks of Australia and New Zealand. It was noted that in the presidents speech obviously written by the government that today there was special mention of France's help after the cyclone but no mention at all of Australia and New Zealand's help and they did the lion's share of the heavy lifting in the post-cyclone. So it is certainly very clear what Frank Bainimarama thinks of Australia and New Zealand and even suggestions that he has taken that help for granted. Given the behaviour with the PACER-Plus negotiations the reasons for Fiji leaving those negotiations and also as you say the timing of these things that to occur right in the middle of the Pacific Islands Forum which Mr Bainimarama himself effectively has boycotted. So the question is as Foreign Minister will he be there at next year's Pacific Islands Forum and many would say that he probably won't  And his own Pacific Islands Development Forum is more and more his focus.