New Zealand's Tongan Language Week has kicked off with a celebration of unity and culture in Wellington.

Tongan is the third-largest Pacific group in New Zealand with just over 60,000 people identifying as Tongan with most of them born in New Zealand.

Koro Vaka'uta attended the Po Lotu or night service which opened the week on Sunday. 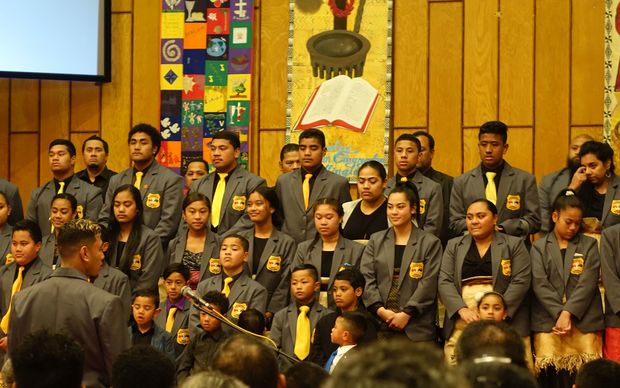 More than 20 churches and community organisations were represented at the service beginning Uike Kātoanga'i 'o e Lea Faka-Tonga, which featured numerous choral items.  A guest speaker at the event was Tailulu Lu'isa Fonua-Faeamani, clinical director of The Fono West health and social services in Auckland.  Dr Fonua-Faeamani says being able to speak Tongan helps her deal with many of her patients.

TAILULU LU'ISA FONUA-FAEAMANI: "They can understand, they can tell you what their needs are, rather than through a translator which is really, really important and we need more people in the health force who can communicate in different languages in order to provide for the Pacific people.  [They] are very high need and they get all the bad statistics in terms of health so being able to communicate with them will be a step further in terms of helping them in the future."

Dr Fonua-Faeamani says being able to speak Tongan helps people identify who they are and participate culturally.  She says she has noticed many New Zealand born youth struggling with the language so it is up to older generations to help them feel comfortable at attempting Tongan.

TAILULU LU'ISA FONUA-FAEAMANI:  "Parents needing to learn that they are the way to teach their children.  You know, they can't expect the children are just going to absorb it in.  They have got to be involved as well so that is why you need to be addressing really from the really young right through to the old."

Kolovula Murphy runs a weekly cultural programme and agrees that inter-generational interaction is important, saying she was proud of the children's involvement at the Po lotu.

KOLOVALU MURPHY:  "Because even some of them they don't understand yet but they can hear the parents and also they grandparents, they are a really great help for them.  That's why they are playing around and enjoying themselves."

LISIELI:  "I get to spend time with the family.  We have Tongan language school every Monday and we have celebrations there and we have lots of Tongan food."

SIAOSI:  "We only see usually the Methodist if we are Methodist then we will just see the Wellington [Methodists] but for this it's pretty much all the Tongan churches in Wellington so it is good to see them all."

17 year old Falakia was born in New Zealand but schooled in Tonga.  He says being able to speak Tongan means he can transition between the two countries seamlessly.

FALAKIA:  "The Tongan language stems from my culture and my country.  It helps me to be Tongan because when I get to Tonga, I speak Tongan heaps."

Kolovula Murphy says all Tongans need to work together to ensure their language and culture stays strong.

KOLOVULA MURPHY:  "It's so special for all of us.  Even Tongans they are born in New Zealand and those they were born in Tonga, back home.  It's a mixed culture but it's so important for everyone to carry on the traditional inheritance, as we are Tongan."

The week is being officially marked in Tongan communities from Auckland to Timaru in the south and ends on Saturday.