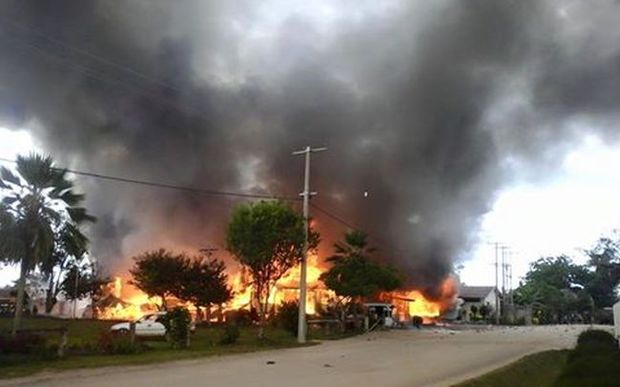 In Solomon Islands, a fire has completely destoryed the old hospital in Gizo. Photo: Facebook

An internal investigation is underway in Solomon Islands after several buildings burned down at Gizo Hospital, in Western province.

The country's second-largest hospital lost its entire supply of medicines and cleaning supplies in the fire last month as well as all of its accounting records and kitchen and laundry facilities.

Police have arrested a psychiatric patient who is alleged to have caused the fire.

The provincial health director Dick Boara says he has also launched his own investigation into the incident.

But he will not say whether or not he has reason to believe there has been negligence or professional misconduct.

DICK BOARA: We are trying to just focus on some key services  I mean areas of the administration especially the accounts and the finance to get it the health services needed that most. So we managed to move them to the new complex we found a small space. But there is some, I think probably four departments, public health departments which we still need to find office space just for them to you know provide service to the public but we almost all the units and departments destroyed by the fire we managed to find temporary space for them at the hospital and also we utilising some private spaces around the town to sort of just house and try to get some of the public health services off the ground.

KOROI HAWKINS: Yes and in terms of the psychiatric patient who is alleged to have caused the fire is he in custody? He can't be charged right under the country's laws?

DB: No you cannot charge him. I think it is in the hands of the local police. But I think we cannot place charges because he is a patient. But I think the local police will have more insight of how the legal side of it but we won't be pressing charges for that patient.

KH: Are you doing any internal investigations in terms of negligence or patient care?

DB: Yeah I think I am doing a it is sort of not an official investigation but you know just finding out stories from staff who are involved and we will have a you know a proper report on that incident probably next week. So we are doing our investigation as well but the police are doing their investigation into this issue as well so I think that is all I can say about that one.

KH: Do you anticipate any heads rolling as a result of those, your own investigations?