Following the move by the Melanesian Spearhead Group to defer a decision on the United Liberation Movement for West Papua's application to become full members, Vanuatu's prime minister Charlot Salwai says there is a need for membership criteria to be developed which better reflects the group's founding principles. 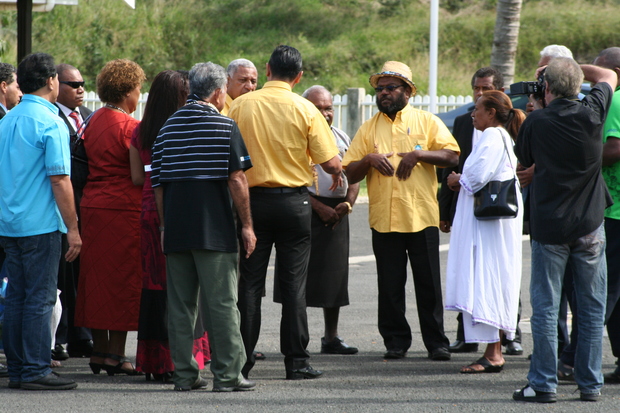 Vanuatu's prime minister says the Melanesian Spearhead Group should stay true to its founding principles on the question of membership in the group for West Papuans.

At this month's Honiara summit, amid intense lobbying by Indonesia, MSG leaders deferred a decision on the United Liberation Movement for West Papua's application to become full members while adequate membership criteria is developed.

There is divergence between some of the leaders on whether the full membership of New Caledonia's FLNKS Kanak movement, sets a precedent for the West Papuans to have full membership.

Charlot Salwai told Johnny Blades that since last year membership criteria was developed which did not reflect the MSG's founding principles.

CHARLOT SALWAI: So that is the reason why we decided not to accept the criteria that was presented for further amendments and we asked the secretariat and the committee to come up with a new criteria that could reflect the fundamental principles of the MSG. Which in the beginning was political and the criteria should reflect political aspiration and the principles of international laws. Because the one that was presented last time it looks like it tends to select financial members. And maybe turn more for trade relationships than MSG its original purpose was political to get Melanesia free from the colonisation, especially for those who are fighting for their self-determination and decolonisation, which is related also to the human rights. That is the reason why we call another meeting and we request the committee to come up with some new criteria that would reflect the original spirit of setting up the MSG.

JOHNNY BLADES: Has the criteria changed at some point since the beginning? Because we know the FLNKS...

CS: Yes that is the issue that, why are we changing the criteria now while the FLNKS is already inside the (MSG). One of the (new proposed) criteria is talking about the state, Melanesian state to become part of the MSG. But the FLNKS is not a state it is a political party as well as the ULMWP (United Liberation Movement For West Papua) So we request that the committee reconsider the criteria that have been submitted to Honiara and the MSG should look at on this special summit that should be held from now to the end of September.

JB: I asked (PNG Foreign Minister) Rimbink Pato about this, what was the difference between the ULMWP and the FLNKS. And he said well, the FLNKS was there from the beginning and they are different because they have a process in place towards decolonisation possibly, you know under the UN. He says that the West Papuans don't have that and the FLNKS are different.

CS: Vanuatu believes that the MSG was set up as Vanuatu was in the very beginning very instrumental in this organisation, and it was to get the whole of Melanesia free from decolonisation that is the idea to set up the MSG.

JB: So are you disappointed with how it has turned out so far or do you think there is still, there is still chance to remedy this?

JB: Who has been changing it? Is this members or secretariat?

CS: Well a committee has been appointed by the Honiara meeting last year 2015 and the proposal was submitted to this year's MSG meeting which, as I said, we checked it, subject to review to be presented in the coming special sitting, special meeting of the MSG in Port Vila.

JB: Why is it important for the region to accept West Papua into the framework?

CS: Well I think everyone knows what is happening in West Papua, with the people in West Papua. The issue with Human Rights as well as it is part of Melanesia and I think it is the duty of the organisation, the MSG, to support them.

JB: You know, this is a very divisive issue. Do you think the MSG will find a way through or will the outside influences maybe threaten the unity over this issue?