Young democracies in the Pacific in need of support 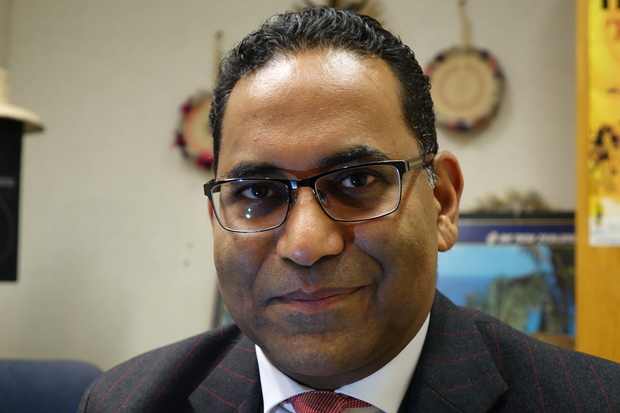 The Secretary General of the CPA Akbar Khan says conversations are key to solving democratic issues in the Pacific. Photo: RNZ/Koroi Hawkins

Democracies in the Pacific are in need of more support according to the Commonwealth Parliamentary Association.

The association represents 180 legislatures with a primary focus on bringing parliamentary staff together to discuss the difficulties facing democracy.

Its secretary general, Akbar Khan told Daniela Maoate-Cox that ensuring young democracies in the Pacific follow the rule of law is a particular challenge.

He said the Association was consistently working to help parliaments in the region.

AKBAR KHAN:So the codes of conduct which we have established as a pan-commonwealth organisation for parliamentarians help to support parliamentarians in terms of how to behave and how to support democratic governance through the demonstration of what they're doing on behalf of the people they represent.

DANIELA MAOATE-COX: But what if they're not following those codes of conduct?

AK: Well, absolutely, and that of course is the big challenge. If they're not following those codes of conduct then it's a questions of bringing together parliamentarians. There are a number of interventions, part of the organisational rational for existing is about having conversations amongst other parliamentarians to see why things are not working and what are the challenges.

DM-C: Where and how would you get those conversations to take place because if you've got enough trouble getting people to meet, just to sit in parliament, like the Cook Islands for example met less than two weeks in total last year, how do you then get them to meet to even discuss these issues that they're having?

AK: Well a good example of how we get them to meet is in fact next week, Next week there will be a conference in Tonga, so we're actually going to Tonga and the Pacific conference, presiding officers and speakers is going to be held in Tonga where we have that opportunity to discuss the role of the speaker in terms of ensuring compliance with codes of conduct in parliament and the role of the speaker as an impartial arbiter in ensuring that parliaments are working effectively and bringing in the different parties and government to abide by the standing orders which are the rules of parliament.

DM-C: But what if you've got place like Nauru where you've had five MPs who were suspended a year into their three year term and, that suspension is not active at the moment because they're coming up to their election, but you've effectively taken away an entire opposition, and then you're able to do what you'd like as the main body in power. What can you do there? And those MPs actually were asking for help from the Commonwealth Parliamentary Association as well, so is there anything that you can do?

AK: Well I think there are things we can do, obviously we're not an organisation which has a sanction shall we say, in terms of expelling branches which behave in a certain manner. But it is about having conversations with members about impressing upon those particular parliaments about the importance of those institutions in the societies in which they operate and also impressing upon the prime minister and the governments of those bodies about the importance of modelling the behaviour of parliamentary democracies and clearly as you say if parliament is not meeting, how is it actually acting as a central institution that amplifies the role of citizens voices and how are citizens having their voice reflected in decision in making if in fact parliament is paralysed because parliament isn't meeting. I think there's not only looking at parliament in terms of an institution per se, it's about what are the consequences for those small island states by virtue of a dysfunctional parliament. The dysfunctionality of parliament in particular as you say, the failure to meet means legislation isn't being passed. It means the role of parliament in legislating to provide the protections and the laws for people and the stability to ensure economic development is being denied and those are the consequences of a dysfunctional parliament.

DM-C: You will have these conversations with different members of different parliaments about what should be done and the best ways to make sure that democracy is functioning as it should, how do you follow up on that once every one goes back to their respective parliaments and make sure that it's actually done, that they do what they say they will?

AK: Well it's a very good question and I think it's one that is particularly pertinent for those of us who are committed to building good governance in democratic parliaments, the point about the conversation is not to be judgemental. I'm not here to represent an association that seeks to be judgemental or to impose a particular way. I think part of that conversation is to try and unpack what are the underlying reasons for why parliament isn't meeting. What are the challenges and they may be structural, or other reasons, why parliament isn't meeting, isn't functioning properly, isn't delivering essentially for the society it seeks to represent and therefore coming out of that conversation we should be able to distil the causes and hopefully through those conversations have some form of follow up to address those causes. So collectively there are a number of very important organisations and governments who have a keen interest in following through coming out of next week's conference and it is incumbent on us absolutely to follow through, we don't want a talkfest, nobody wants a talkfest but you do need those conversations to understand why we are where we are before we can then make progress on addressing the underlying causes.