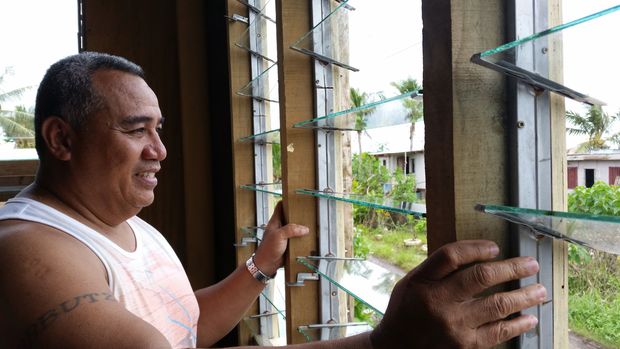 Pastor Mike Naisau of the C3 Church in the Lovu Settlement, Lautoka Photo: RNZ/ Sally Round

It has been three months since Cyclone Winston, the strongest cyclone to make landfall in the South Pacific in recorded history, tore through Fiji's main island of Viti Levu.

The government's co-ordination of the local and international disaster response has been relatively well organised and well received by affected communities.

But the sheer magnitude of the destruction has meant efforts to acquire the resources and material to begin rebuilding continues to be slow.

This is especially true for more than 300 families in the Lovu settlement North of Lautoka who have yet to start rebuilding their homes.

Pastor Mike Naisau of the C3 Church who ministers to the community told Sally Round the people he has spoken to are in high spirits despite the delays.

MIKE NAISAU: What is actually happening now it is almost, I can say it is almost back to normal with life except for some of the houses that are still damaged and all that. Otherwise when we talk to people things seems to be going back to normal it is quite a quick recovery.

SALLY ROUND: That is pretty amazing isn't it? Because they were very down when I visited say six weeks after the cyclone and that was like four weeks ago, they were pretty down.

MN: Yes I think because of the frequent visit from the government side. Things are beginning to take shape for them. Some have actually received some of the grants promised to them which is a boost for them.

SR: So these are the grants, the help for home initiative is that what you are talking about?

SR: So they have got this money to, they get hardware supplies don't they on a prepaid card is.

MN: What happens is they have to apply and each one of them are given a card and they take this card across to the hardware departments to purchase their materials for building.

SR: And so that has really helped a lot has it, what sort of activity are you seeing around the building?

MN: Right now because there is so many people going for this there is a lot of hardware departments that cannot actually meet the demand. So most of the orders are on hold but you know they are happy knowing that something is coming across for them which is free.

SR: So they are happy just to wait until those materials are available?

MN: Yes because everybody came into place their orders, even me I wanted to go and place some orders, I couldn't get anything at all.

MN: Less than a month.

SR: And what about people's mental state, because when I visited a month ago I could tell that people were really exhausted, tired and almost really quite depressed about their circumstances, has their mood changed?

MN: Yes, things have changed a lot because what has actually happened is we have actually gone around twice now just to visit some of the families and talk to them about what has happened and for most of them things are almost back to normal. For them they are good which is a contributing factor because the government is actually stepping in and they are trying to help as much as they can.

SR: And what about for those people whose places were completely gone? Are they still living in tents?

MN: Yes, the tents are still up and that is what I said they are still waiting for the materials to come. For some of the houses that were completely destroyed the government is going to build their houses.

SR: Oh they are actually, how do you mean they are going to build?

MN: I don't know whether you have noticed when you came around the community there were a few houses there that were government built. Built by government. So the promise to these families is that the government is going to actually build them a house a proper house.

SR: And what it will be their house or will they pay rent for it?

SR: Okay so they are just going to build more. Do you know how many more?

MN: So far what I have heard is about four. Maybe four houses. But it could be more.

SR: So things looking good, now what about the food situation? And many people when I visited there wasn't enough work they are informal workers casual labourers and they didn't have the work because after the cyclone a lot of business had gone down. So are people finding jobs now?

SR: So they have got plenty of food.

SR: Are there any health issues?

MN: No the good thing about it there was actually no outbreak of any sickness it was really good. No major sickness in the community that we are in there is really nothing major that happened in there.

SR: Are you surprised that the recovery has been quite quick?

MN: I am, I am we have been reaching out to this community for over seven years and it is quite surprising to see what has taken place in a very short time.