Amid all the off-field talk, Jarryd Hayne finally hit the training paddock with the Fiji Sevens team in London this week.

But whether the multi-code star will get the chance to light up proceedings at Twickenham this weekend will be left to the last minute.

The 28 year old Hayne pulled the pin on his NFL dream after one season in America, in a bid to play at the Rio Olympics.  San Francisco 49ers coach Chip Kelly says he wasn't expecting Hayne to leave the NFL.

Hayne spent time with the Fiji sevens squad during the World Series event in Sydney in February and head coach Ben Ryan says that experience sowed a few seeds that just got bigger.  The former Fiji Bati and Australian Kangaroos rugby league international was approached a few weeks back about joining Fiji's Olympic push and says he was convinced to jump on board by their greatest ever sevens exponent, Waisale Serevi.

JARRYD HAYNE: The one person that I wanted to get the green light from was Serevi, him being the greatest of all time and having a close friendship with him.  He was the first person that I really spoke to that I was serious about it. He supported me.  He obviously said fitness is going to be the biggest key for me.  Once I get up to scratch fitness-wise that it will be smooth sailing.

Fiji coach Ben Ryan says he can't promise Hayne will make their final squad of 12 for Rio but says it's a no lose situation for all parties. 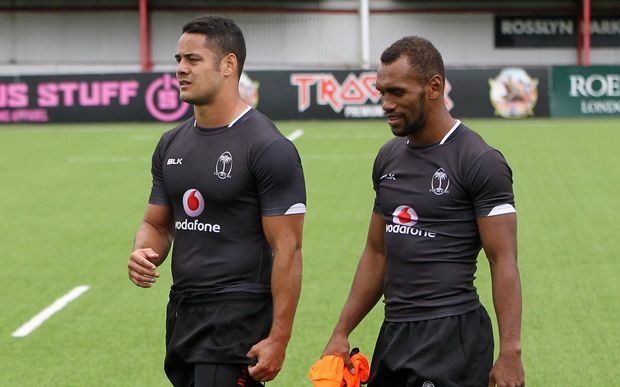 Hayne admits he has a "mountain to climb" if he's to break his way into the squad for the  Olympics.

JARRYD HAYNE:  Take it day by day.  Like I said, I have a lot of work in front of me.  Where I am now, I need to be a lot further on and I will be.  There's a big mountain to climb for myself and I have got the most confidence in myself that I will do the best of my ability and hopefully that's enough for Ben to give me the nod.

Hayne had his first training run with his new team-mates on Wednesday in London and will find out on Friday if he has made the final cut for the World Series finale in London.  This weekend's tournament will be his one opportunity to state his credentials in a sport he's never played.  Ben Ryan says he will base his selections solely on form.

BEN RYAN:  We've only had a day training with Jarryd so it's a huge learning curve for him and he's throwing himself in at the deep end and doing pretty well at the moment.  With the competition we have in the squad we are going to leave selection right until the last.

Fiji lead South Africa by eight points in the World Series standings and just need to reach the Cup quarter-finals at Twickenham to retain their World Series title.