Cook Islanders take to the streets over purse seiners

Cook Islanders have again taken to the streets to protest the government's plans to allow more purse seine boats to fish in its waters. 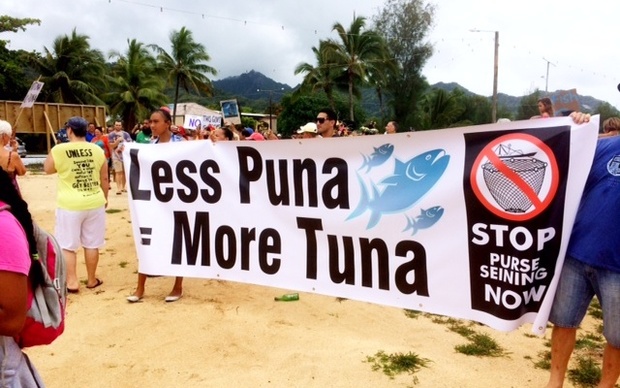 Cook Islanders have again taken to the streets to protest the government's plans to allow more purse seine boats to fish in its waters.

The governments latest deal is with the European Union, which will allow four Spanish purse seiners to harvest in Cook Islands waters for eight years, with tacit approval to continue after that.

It already has access agreements with two Korean based purse seine fishing companies, and a New Zealand company.

Protest marches were held earlier this year over the issue, and a petition to ban purse seiners gathered thousands of signatures.

Kelvin Passfield, from the environmental NGO Te Ipukarea Society, took part in the latest march over the weekend and told Leilani Momoisea that people are angry, and feel the government is not listening to them. 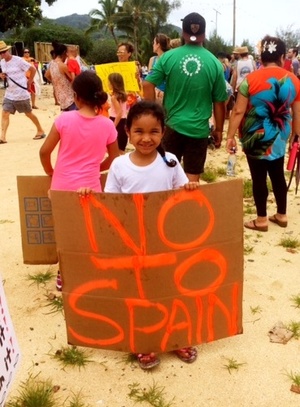 A young protester in the Cook Islands. The government has a draft agreement with the European Union for Spanish purse seine vessels to fish in its waters. Photo: Flo Syme Buchanan

KELVIN PASSFIELD: We're just really, really disappointed that despite the fact that over 4,000 people, so over half the voting population signed that petition and it was presented to parliament back in June this year. Despite that, the government has still gone ahead with negotiations, or continued negotiations with the EU for a Sustainable Fisheries partnership as they call it, to allow for Spanish super purse seiners into the Cook Islands zone.

LEILANI MOMOISEA: And tell me about some of the placards that were held up, I understand some of the messages were quite colourful.

KP: Some of them were perhaps too personal, we don't like to mention names if we can help it. There was a lot of 'WTF' banners, but WTF in this case stands for 'Where's The Fish', because the fishermen in particular are saying there's not as many fish around as there used to be. As I say, some of the other ones, I probably don't want to say some of the other ones on the radio, it's a bit too personal for some of the politicians and senior public servants.

LM: But I suppose that really illustrates the depth of feeling people have about this issue.

KP: It really does. People are just so disappointed that the minister for Marine Resources is supporting this move by the secretary of marine resources to carry on with this deal. I just found two of the banners that someone dropped off here at the office. I can tell you these ones, it says 'No fish, no future', and the other one says just plain 'Stop It.' People are just very angry, in fact one of the traditional leaders, when he was speaking, it was Manavaroa Mataiapo, you could just see the anger in his demeanour. He was fuming at the fact that this was supposedly going to go ahead despite the fact that so, so many people are against it and the petition is sitting in parliament, still not even debated, and they're just going to go ahead and sign up a new deal.

LM: So people are feeling betrayed.

KP: Yeah, betrayed and angry. They feel like they're just not being listened to. It's supposed to be a democracy, and the government was elected by the people, it's supposed to be the five cabinet ministers are the ones who have to ratify this agreement before it gets approved, and on the other side the EU parliament has to ratify it on their side. But that'll go ahead, they've already started the process in Europe. Here they're supposed to be having a consultation process. I think the consultation from our point of view has already happened. We've already said no. They're just not listening. 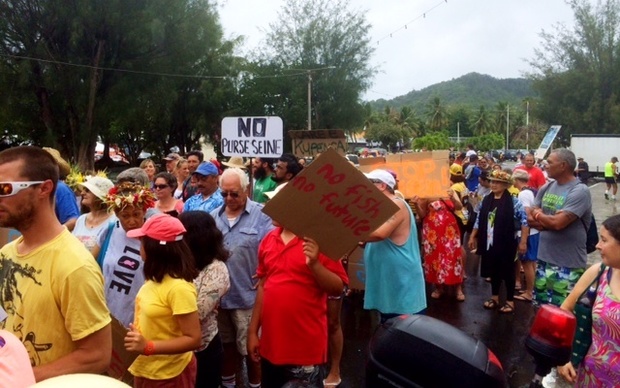 Protesters in the Cook Islands protest a draft deal between their government and the European Union. Photo: Flo Syme Buchanan