Nauru govt appears to be taking an increasingly strident stance

The Nauru Government appears to be taking an increasingly strident stance as it battles opponents to its controversial moves.

Over the past month Nauru has deported expatriates, resurrected old police investigations and stopped benefit payments to some - moves many see as aimed at anti-government supporters.

Walter Zweifel has been following the situation and he began by telling Don Wiseman why New Zealand cut aid to the justice sector five weeks ago.

WZ: New Zealand had had concerns reaching back to the beginning of last year when key members of the judiciary were removed. When a suspended Opposition MP, Roland Kun, had his passport seized in June this year there was an international clamour for action. New Zealand was certainly concerned that Mr Kun, whose family lives in Wellington, had never been charged with any offence. So New Zealand suspended the aid, saying it was concerned about abuses of civil rights, but says it has hopes it can be resumed.

DW: But the Nauru Government doesn't appear in any way moved. Since then it has been putting the boot into Wellington and blaming the foreign media for turning New Zealand against it. And it has taken a series of seemingly provocative actions.

WZ: This began with the swift removal of several expatriates without reference to the courts. They were accused of importing drugs but there were no charges brought and the Government, which made draconian changes to its own Immigration law last year, did not even follow its own rules. One of those forced out of the country - a Chinese man - had been there ten years, is married to a Nauruan and has a family of five who are still on the island. According to the Chinese man's Nauruan business partner it is about trying to intimidate people involved in anti government protests.

DW: Now while Roland Kun has yet to be charged and his Australian lawyer is being forced to jump through hoops to get into the country, Nauru says it is investigating his involvement in a fatal car crash 24 years ago;

WZ: Yes the Government claims Mr Kun, who was 21 at  the time, was drunk, and only evaded prosecution at the time by using the Kun family influence - Roland's father was a prominent member of the government at that time. The prosecutor involved at the time has dismissed this latest move as an abuse of power by the government. 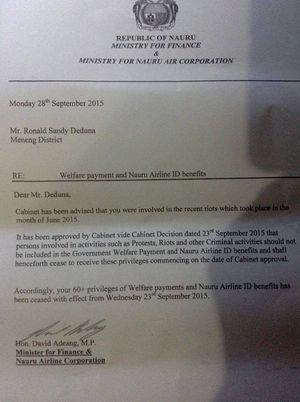 A letter sent to a member of the public by the Nauru government Photo: SUPPLIED

DW: The Government has already sacked people from government jobs if they had been involved in the anti government protests back in June, but this week it also stopped benefits and other payments to older Nauruans who it has accused of being involved.

WZ: Opposition MP, Mathew Batsiua says he knows of two pensioners who received letters from the finance minister David Adeang this week, advising them they would no longer receive welfare payments or Nauru Airline benefits. The letter says Cabinet made a decision last week that people involved in protests, riots and other criminal activities would stop receiving government privileges. Mr Batsiua says the two pensioners have not been charged with any crime, nor had a chance to appeal the government's decision about their benefits. He says they have been using this carrot and stick approach for a while now - punishing those who are critical and rewarding the obedient ones with free travel or other perks.

DW: The political shenanigans no doubt all relate back to the controversial Australian asylum seeker camps on the island, and this week, among more revelations of rape and abuse, the new Australian prime minister, Malcolm Turnbull,  expressed his alarm. He is promising to take a number of steps to work closely with the Nauru government to ensure the safety and the security of all the refugees.