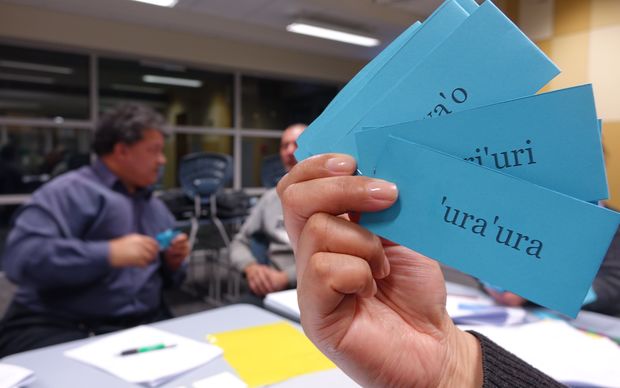 Cook Islanders have been sewing, strumming, and swaying their way through Cook Islands Language week events in New Zealand but the majority of them cannot say much beyond kia orana.

Out of the 62-thousand Cook Islanders in New Zealand only 13 percent say they can speak hold a conversation in te reo.

But an enthusiastic class of adults in Porirua, Wellington, are fighting the trend by meeting weekly to learn the language.

Daniela Maoate-Cox dropped in on a lesson.

It's late in the evening and a group of nine is gathered at Porirua College after a full day at work to learn the song, Hokey Tokey. The free weekly class is in its third year, numbers fluctuate and the faces change but the enthusiasm of those present never waivers. By day 26 year old Stacey Morgan teaches te reo Maori o Aotearoa but by night she learns te reo Maori o te Kuki Airani. She's been coming to class for 5 months and says learning the reo is a way to honour her heritage.

Like many living in New Zealand, Stacey identifies with multiple ethnicities, Cook Islands Maori, New Zealand Maori, English, and Welsh but her capacity for Maori language is not as common. About 62-thousand people identified as Cook Islands Maori in the 2013 Census but only about eight-thousand or 13 percent say they can speak the language. Stacey says the journey towards fluency is not easy.

STACEY MORGAN: At a mainstream school where English was the main language, that was quite challenging and it took me quite a while, probably six or seven years to become confident to use the language but I think just being in environments where the language is used, so just using it outside of our classes which is quite challenging because less people know Cook Island Maori who I work with or who I'm friends with and that's quite tricky.

Builder, Nigel Vaianu, grew up with his grandparents who are fluent speakers of Cook Islands Maori and being able to communicate with his extended family is motivating him to learn.

NIGEL VAIANU: I'm 40 now, so I guess that's one of the driving things behind it.

DANIELA MAOATE-COX: What are your hopes for your children, would you like them to learn the language as well?

NIGEL VAIANU: Yeah, they're Cook Island, they've got a few choices of languages they can learn. I think it'll be a good idea but me first. I've got to get it first and maybe they'll join in later.

Efforts to pass te reo on to the next generation faded during the last century as the influence of western culture dominated the Pacific. Data from the 2013 census shows those born in New Zealand are less likely to speak Cook Islands Maori than those born overseas with the numbers sitting at 3.6 percent and 44.9 percent, respectively. The class' teacher, Teremoana Hodges, says the lull is devastating.

TEREMOANA HODGES: You can't identify yourself in a language that's alien to you. But if I said to you, toku ingoa ko Teremoana, no Rarotonga mai au, that's my identity. But if I said, my name is Teremoana, I come from the Cook Islands, from Rarotonga, it doesn't have the depth. There is a saying that goes, look to the source of where you're from, and the depth of that knowledge and the depth of where that comes from.

Teremoana Hodges says she hopes to develop a website and app for the language. But for now it's baby steps for this group in Porirua as they focus on perfecting the Hokey Tokey.