Pacific leaders are calling for immediate action from the United Nations saying changing weather patterns are threatening their future existence. 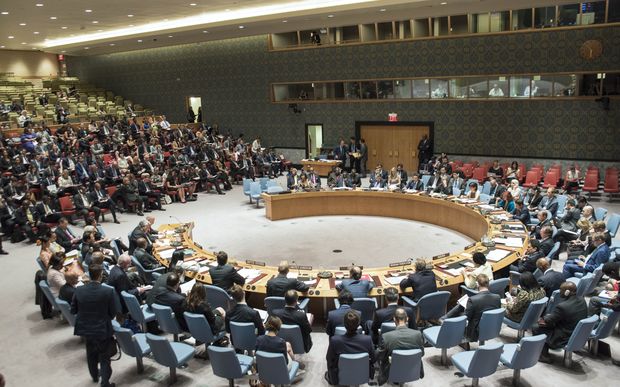 Pacific leaders are calling for immediate action from the United Nations saying changing weather patterns are threatening their future existence.

A special session of the United Nations Security Council was held in New York on Thursday to discuss issues facing dozens of small Island developing nations.

Delegates and government representatives from Pacific nations told the Council that climate change is an issue borne from the actions of all human kind, but global accountability is lacking.

Of the 44 small island developing states, only six have served on the Security Council. New Zealand's foreign minister, Murray McCully, who was also the council's president for July, says the debate is a rare opportunity for SIDS nations to tell the council about their issues, especially as they make up a fifth of the UN member nations.

Mr McCully says small countries face a range of issues including transnational crime such as piracy, people smuggling, and drug trafficking. But for Pacific nations, their critical issue is the threat of losing their land to climate change. The president of Kiribati, Anote Tong, says the quiet onslaught of climate change has lulled countries into a false sense of security and a belief that it is too difficult to tackle. He says leaving the problem for the next generation is unacceptable.

ANOTE TONG: We owe our children, we owe our grandchildren and their children more than that. We need action that can guarantee that no one will be left behind and most importantly, urgent action to address the security and existential challenges from climate change for the most vulnerable peoples on the front line states.

A representative for Tuvalu, Sunema Pie Simati, says the Security Council needs to review its mandate to fully embrace the concept of environmental security.

SUNEMA PIE SIMATI: Four small islands have disappeared in Tuvalu since 2000. Two of which vanished during the recent cyclone Pam in March this year. They are here today, and they were gone the day after, and that's how fast our islands could disappear, in just the blink of an eye, if nothing is done to address climate change.

A representative for the Marshall Islands, Deborah Barker-Manase says early weather warnings are not much help for low lying nations where there is nowhere to go. She says sympathy is not good enough.

DEBORAH BARKER-MANASE : A nation with no higher ground, so narrow you can stand in the lagoon and see the ocean on the other side. I ask for the council's direct action in adressing small low lying attoll states within your formal agenda and not for your continued silence, general sympathy or references to multilateral negotiations illequipped to directly adress this issue as it pertains to low lying island states.

RATU INOKE KUBUABOLA: One obvious response measure is to address sustainable energy in a meaningful way, supplying energy through burning fossil fuels for electricity, heat and transport, is a major source of greenhouse gas emissions causing climate change, and ocean acidification. This has to stop or be severely curtailed  if you're going to have sustainable development on this planet.

The small island states also want the protection and sustainability of marine resources addressed. Murray McCully says US$3.4 billion worth of tuna was caught in the Exclusive Economic Zones of Pacific Countries last year with an additional four hundred million US dollars US$400 million worth of tuna estimated to be taken illegally. Pacific owners receive around 14 per cent of the market value of the resource. The Premier of Niue, Toke Tolagi says other nations need to do more to share returns made off island states' marine resources. He says Niue is often described as poor despite having plenty of fish and seabed minerals and other countries need to rethink their behaviour in the Pacific.

A representative for the Federated States of Micronesia, Jane Chigiyal says FSM is a large oceanic state that doesn't have the resources to combat illegal activity.

JANE CHIGIYAL: With such a large, exclusive economic zone, the task of patrolling it is daunting and our area could become a prime location for criminal activites and transit point for human trafficking and drug smuggling.

Tuilaepa says the Pacific's security concerns are varied and complex and he asked the Council to schedule one day a year to consider the challenges SIDS face. Pacific leaders will meet again in Paris in December, for the United Nations Conference on Climate Change.