Marine scientists are dumbfounded by the discovery of sharks swimming inside an active underwater volcano in Solomon Islands. 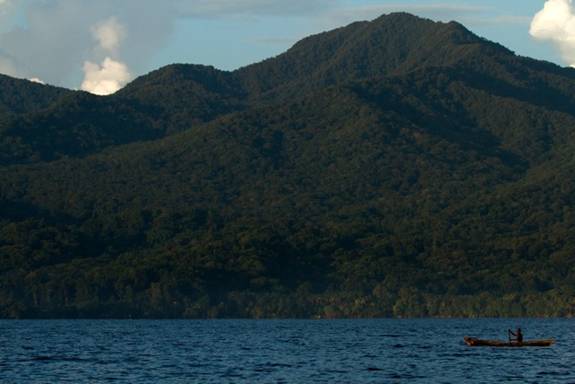 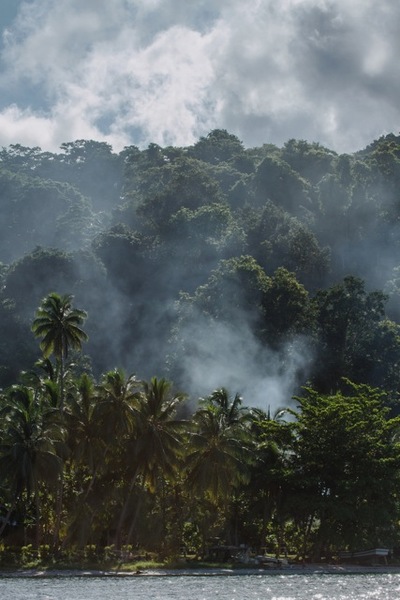 A steamy day in the Solomons 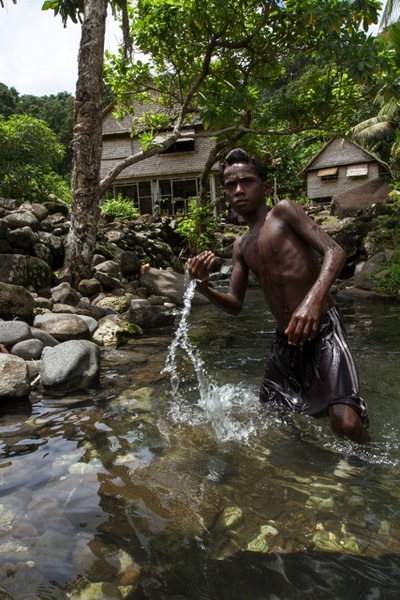 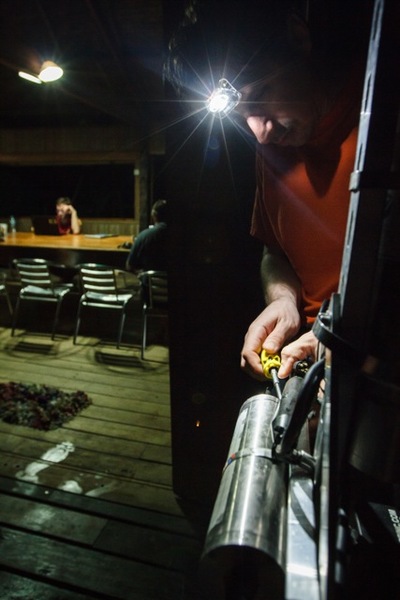 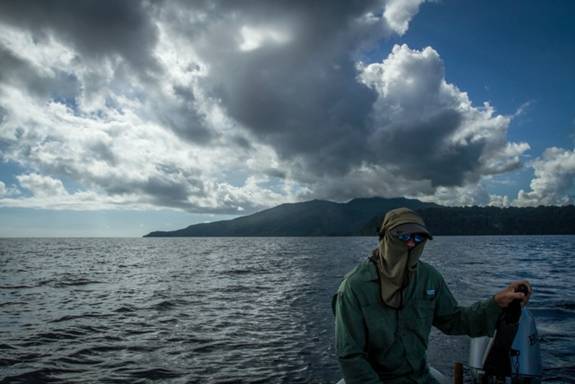 Heading out on the volcanic waters. Photo Alex DeCiccio. 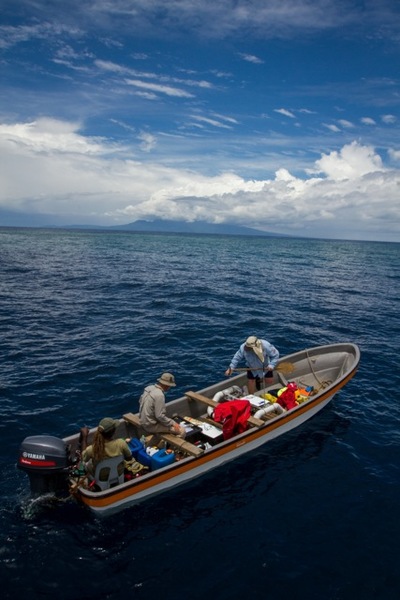 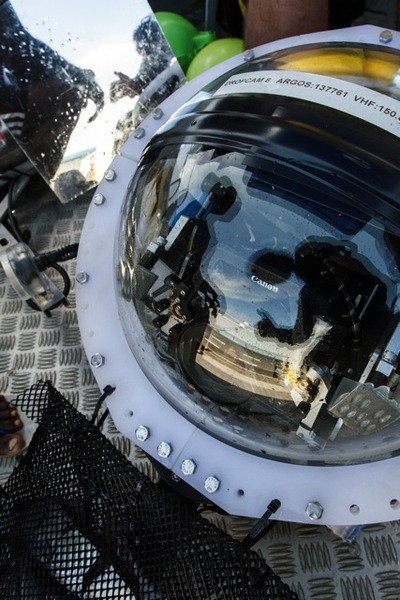 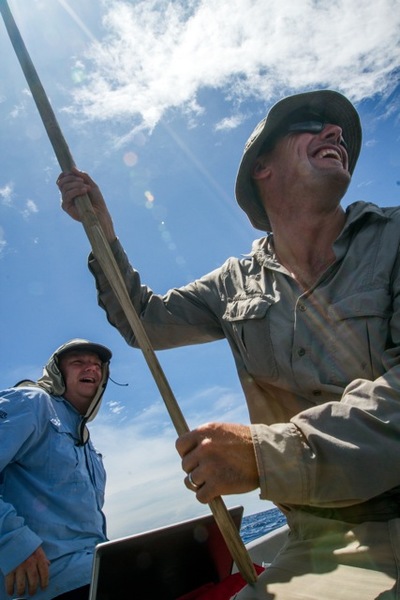 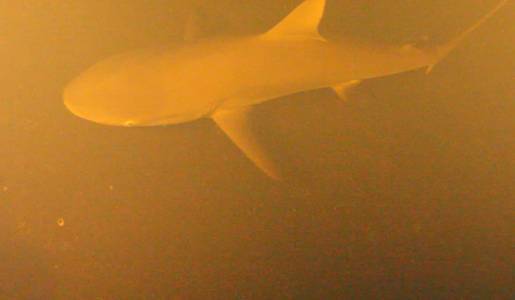 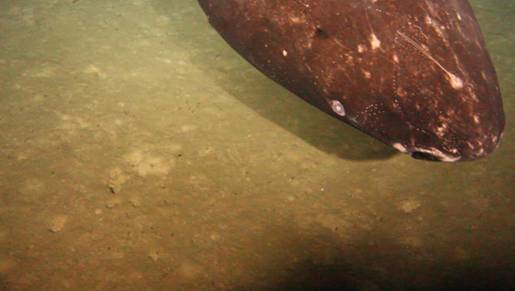 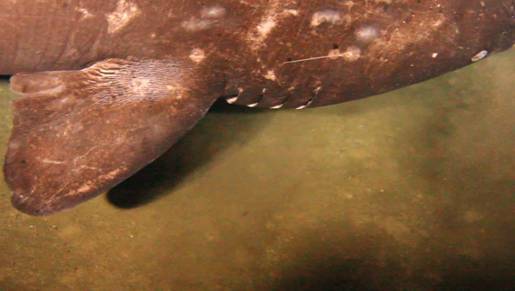 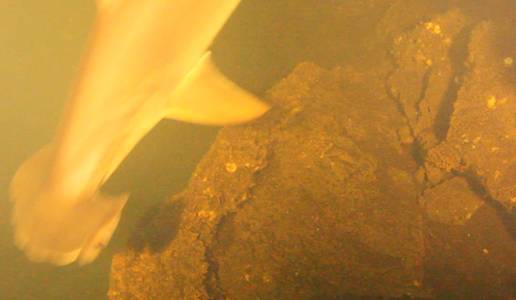 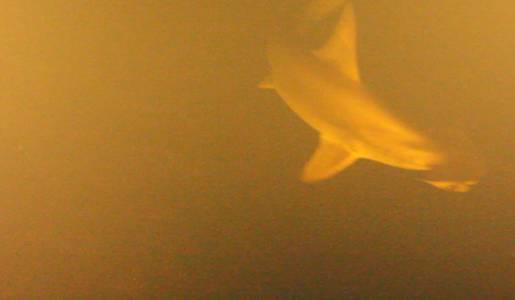 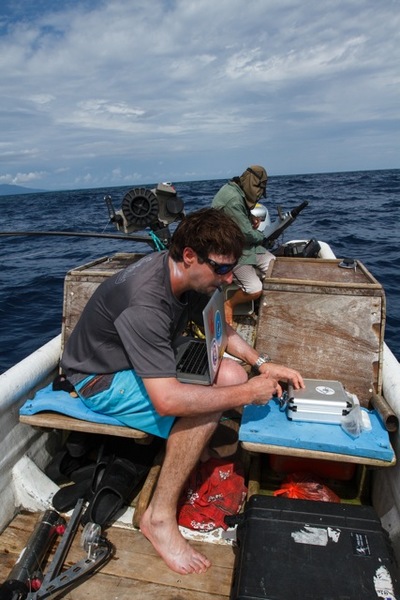 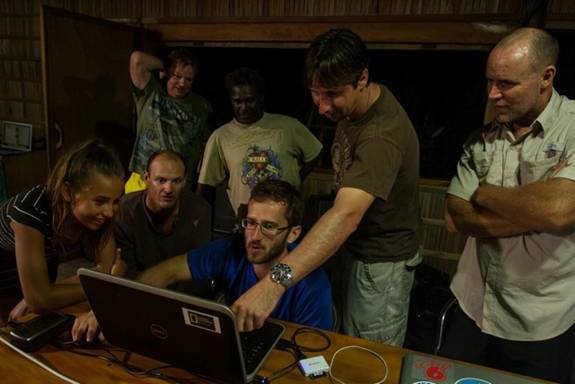 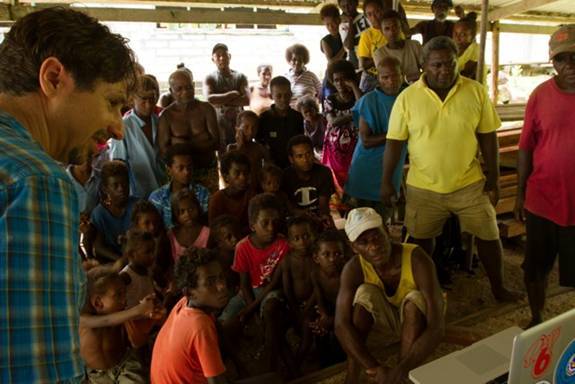 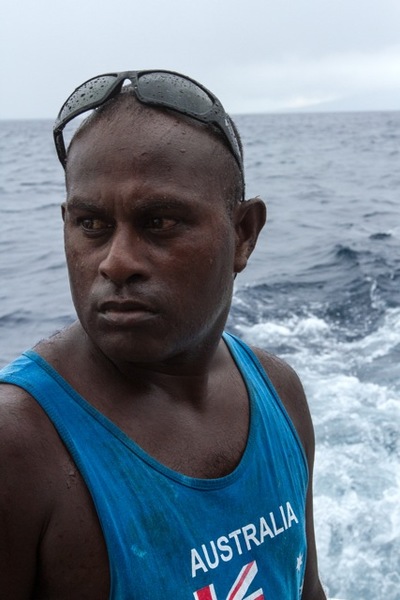 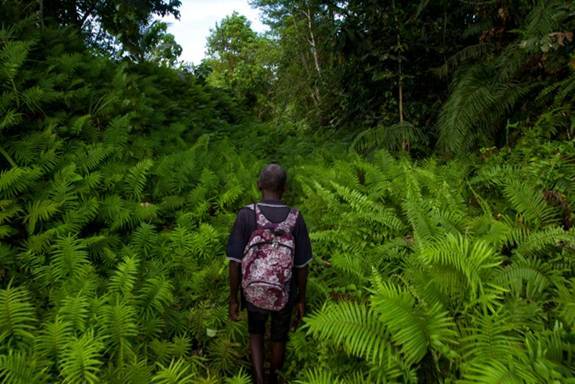 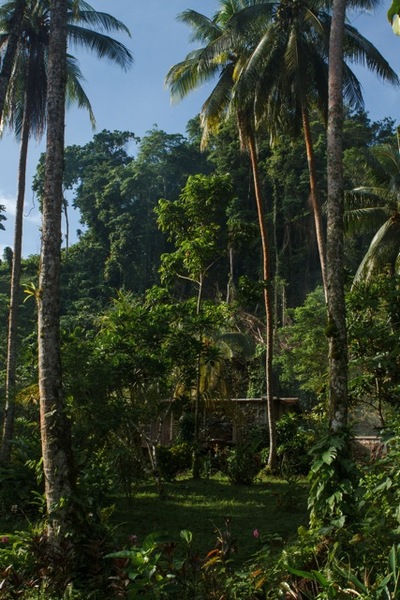 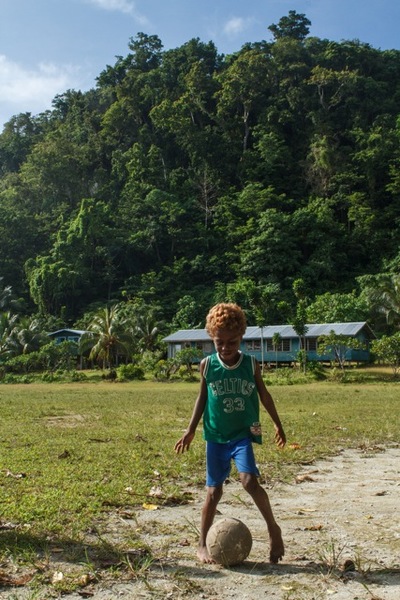 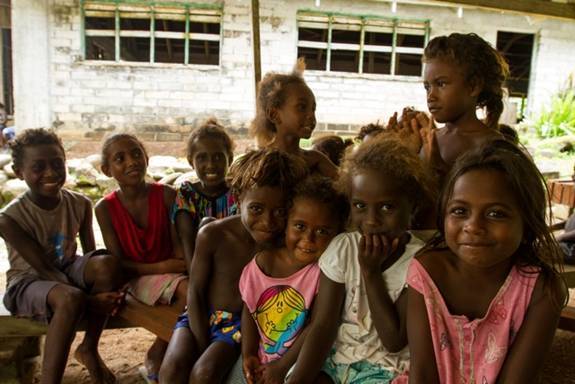 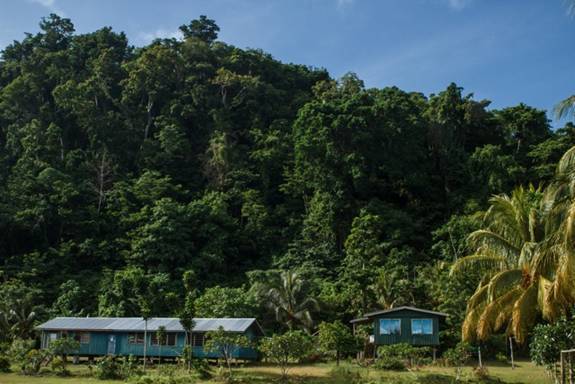 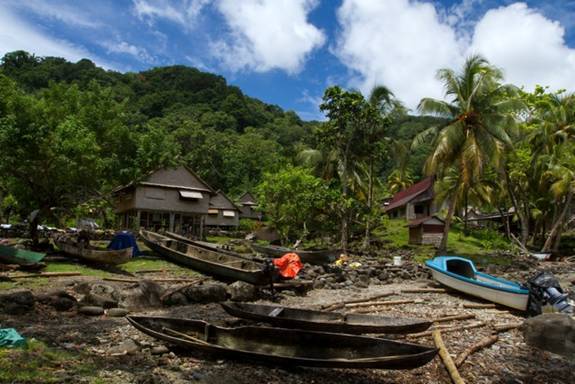 Village on the shores of Marovo lagoon. Photo Alex DeCiccio. 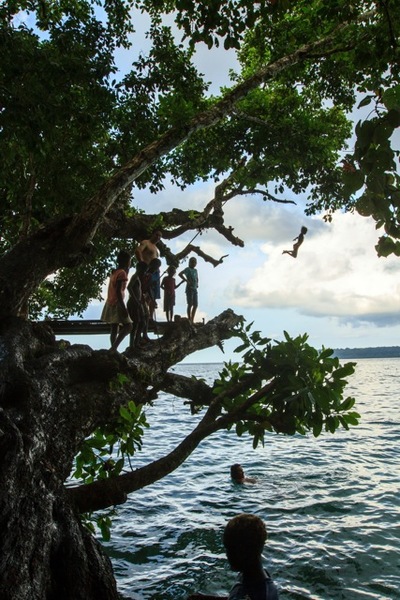 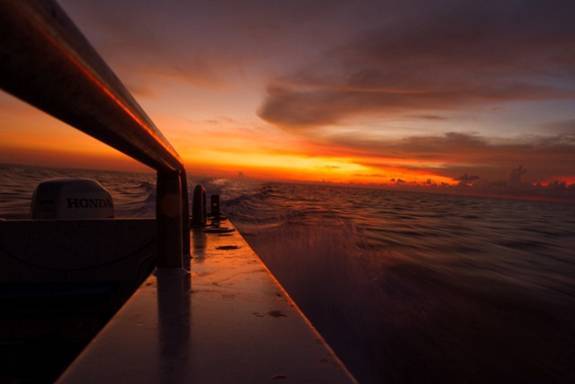 Dozens of hammerhead  and silky sharks were filmed swimming around in extremely hot and acidic water inside the caldera of the Kavachi volcano in a lagoon in the country's west.

The expedition leader Brennan Phillips says the scientists were expecting to find very little life in the harsh water conditions.

Brennan Phillips says the discovery highlights the need for more research in the area before projects like seabed mining are allowed to go ahead.

Marine scientists are dumbfounded by the discovery of sharks swimming inside an active underwater volcano in Solomon Islands.

Dozens of hammerhead  and silky sharks were filmed swimming around in extremely hot and acidic water inside the caldera of the Kavachi volcano in a lagoon in the country's west.

The expedition leader Brennan Phillips says the scientists were expecting to find very little life in the harsh water conditions.

Brennan Phillips told Koroi Hawkins the discovery highlights the need for more research in the area before projects like seabed mining are allowed to go ahead.

BRENNAN PHILLIPS:  They collaborated on the project and we both had sort of a collective vision of what we wanted to film.  Alex likes to film the process of science so he wanted to tell a story with that and with that story tell something about the pending impact of deep-sea mining in the region.  There is a lot of interest in this part of the world to mine resources underwater.  As a scientist I understand that there is really just no baseline to begin with when you are looking at sort of environmental impact studies on the area.  We find new event sites all the time and they host new animals.  Sort of like, under-explored, really under-explored territory.  I sit in the camp of I would like to learn about it before a company, let's say for commercial purposes, goes in and takes out the environment for the resources that are there.  It's actually an accessible way to tell a story, I thought, about what could be and what is there before it gets mined.

KOROI HAWKINS:  You came across some unexpected finds with the cameras that you were working with at the time.

BP:  We reacted to what we encountered.  Kavachi is a very active volcano, it is one of the most active in the Pacific, submarine or not.  Nobody knows exactly how often it erupts but we know it happens maybe on a monthly basis.  That is blowing steam up in the air and it is sending some incandescent rocks and lava and that sort of thing.  That's a fairly common occurrence but we got out there on our first field day and it was very calm and it there was no indication, there wasn't anything audible, even when it's not blowing steam you can a lot of times hear it underwater rumbling. There was no sound.  There was nothing so we started to focus on the main peak itself because we could get so close.  We did that every day and it seemed to get calmer and calmer.  There was a surface expression of plume, chemically altered water was coming out of the volcano and that creates a surface plume, a sort of green/orange tint.  That plume got smaller every day we got out there.  We became increasingly confident about getting close to it and then we started dropping instrumentation directly into the caldera.  That was the first surprise that we could get that close but then the imagery that came back about the animals that were inside the caldera was totally unexpected.  I didn't have any idea that we would see that.  I was hoping that we would get the camera close enough to see some different coloured water which we definitely did.  Maybe some an active chimney.  We didn't see that but we saw all the big sharks that were in there so that was a total surprise.  It just kept coming.  Dozens of them and they are quite large.  There's also smaller fish that are in there and some gelatinous animals are also in there.  This whole little ecosystem, there is like a whole series of trophic levels that seem to be coexisting when it's not erupting.

KH:  Why is that surprising?

BP:  Because it is so active.  It forms an island on and off.  It's not like this crater is a stable thing.  You can envision, there are some sensational words I'm quoted as saying animals could be blown sky-high and be blown to bits.  It's actually not too far fetched.  The sharks are probably smart enough to feel something, they know that things get active and they might get out of the caldera but the smaller fish or resident population that builds up because they like the plume, for whatever reason, its destroyed rapidly all the time.  It's really surprising to me that there were that many animals in there.  Furthermore, the water, I don't have a temperature reading and I don't have an acidic reading but I do know it's hot and I do know it's acidic.  I know that human divers, our guy went pretty close to the rim and he got skin burn while these animals are actually inside it.  There is a little bit of research that is out there about sharks and it's all negative, they definitely don't like lower pH water.  This is almost certainly acidic water.  A total hypothesis but it may be the size.  I've worked on other volcanoes where we have measured the pH inside there.  pH can get sometimes four or five.  We are not talking one point we are talking three or four.  That's really acidic and it doesn't jibe with what we know about shark biology.  There's a number of questions, the more we learn about it, the more it just doesn't make sense.

KH:  What do you want to do with this information that you have?  What are you doing with it?

BP:  We are going to publish at least one paper that is going to describe Kavachi a little bit better so we are going to publish, we want to get the media out there about it.  It's really successful.  It's a great story and we are reaching a lot of people that way but I am already working on a way to get back.  What I think now we want to do is try to judge the question, what do the animals do when the volcano does get very active?  We could maybe pair seismonitors that are left out there for a year.  We could get a better idea about what the activity cycle is like and then we could do something with cameras.  Time cameras or burst shot cameras, something like that, something that we are OK with it maybe getting destroyed.  Trying to see what actually happens and try and answer some of these questions about it.  I keep saying it is hot and acidic, I want to know how hot and acidic that is.  Making these kinds of measurements we would be able answer a lot of these questions a lot of people have after they've seen the one video that we have up.

The expedition was supported by the National Geographic Society/Waitt Grants Programme.