A book recording the first and only Pacific voyage of the Rainbow Warrior is being re-issued to mark the 30th anniversary of the bombing of the boat in Auckland Harbour by French spies.

Less than two months before France bombed Greenpeace's Rainbow Warrior, in Auckland Harbour in July 1985, the boat had made a dramatic voyage through the Pacific. 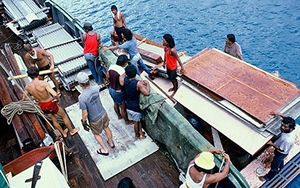 Loading the Rainbow Warrior ahead of its final Pacific journey in 1985 Photo: David Robie / Eyes of Fire

It was its first and last Pacific voyage and a remarkable one, relocating the people of Rongelap Atoll in the Marshall Islands.

Rongelap had been caught in downwind fallout from the United States Bravo Hydrogen Bomb test at Bikini Atoll 35 years earlier.

The Rongelapese had been moved off the island for three years but taken back in 1957.

But they continued to suffer an inordinate number of cancer conditions and other health problems attributed to the bomb test fallout.

So plans were made to move them again and Greenpeace offered to help.

One of those on the Rainbow Warrior at Rongelap - one of five journalists - was New Zealander, David Robie, who these days is Professor Robie and head of the journalism school at AUT.

Professor Robie's account of these events is Eyes of Fire - The Last Voyage of the Rainbow Warrior, and that is being re-issued to mark the 30th anniversary of the sinking.

Don Wiseman spoke with David Robie and began by asking him about Rongelap.

DAVID ROBIE: Idyllic, beautiful, typical atoll in the Pacific with absolute tranquility and beauty. And one of the first things that was really hard to compehend was that this had been a target of considerable anguish and health problems from years from the bravo test, that these people were contemplating having to leave their homeland for another island where they had no real traditional rights, or land rights, or anything. It was like leaving paradise for an unknown future.

DON WISEMAN: What did you see in terms of the state of their health?

DR: Well, there were signs you could actually see. Just talking to people and wandering round, you could see examples of young children that had deformities, and so on. You could clearly see that there was a health legacy problem. You know, initially they weren't ready to leave. They wanted to leave; it was their choice. The homes weren't taken down so there was about three days of discussion and preparation for the actual move. During that time we had quite a lot of opportunity to talk to the villagers and their families, and get a sense of that terrible health legacy.

DW: The relocation itself must have been quite remarkable because the Rainbow Warrior is a small boat, or was a small boat, but yet you got 70 or so people and tons and tons of material on each voyage.

DR: Well there were four actual voyages to relocate all the people on the atoll and their homes. Yes, it was an extraordinary logistics exercise and there were well over 100 people on some voyages that we took. You know, there were a different number each time depending on the materials and things.

DW: Was that a problem for the boat? Could the boat handle that?

DW: The Rongelapese were okay with it? All of them?

DR: Well yes, yes. But as I say, they were led by Jeton Anjain, and Senator Jeton Anjain, who really made the key calls, if you like, and sadly he passed away in 1993 from cancer. You know, many many cancers in the society. He realised that something drastic had to happen for the people to move and also to basically up the stakes in terms of negotiation with the compensation with the US and so on. And he had actually approached Greenpeace and said "look we've got the ship; we need the help ... no one else is helping us, please come and help us move to our new location." But, when we arrived, of course they hadn't actually gone through the whole process in the village of the actual details of moving and I guess we were a bit surprised really to find that there were meetings- community meetings- still going on. But pretty well it was united, it was just taken in a typical Pacific way. It took time to go through the final steps. And it's really hard for people from, say, a society like Australia or New Zealand to just comprehend the momentous task of people moving away from their traditional land is everything. Land is the whole being, it's the whole existence. To actually move away from that ancestral heartland, if you like, even to another atoll. Ironically this is Kwajalein atoll where the Americans do their Star Wars testing- another part of the atoll of course. Mejato was the island that they were moving to. Very beautiful in its own way but not Rongelap, and nowhere near as nice as Rongelap, and there were issues about water and so on. So the people were aware of these issues and, so, it did take that process of the final few days and then finally pulling down their homes, and packing everything up to go onto the Rainbow Warrior.

DR: Well I think so. I mean, of course I'm not a Greenpeace member as such, or anything like that, but I went there as an independent journalist. I was affected just like everybody on board. It's affected me for the rest of my life. I think that everybody felt that they probably achieved one of the greatest things that has been done in a humanitarian way on the Rainbow Warrior. And sadly, that's been overshadowed by the bombing saga in Auckland later on because this was a story that needed to be told over and over again really. Really, how a small crew basically helped this entire community.

DW: You must have felt quite honoured to be involved in it as a journalist.

DR: Oh absolutely. It was a privilege when I look back. I was actually freelance at the time and it was a big decision for me because I knew that if I was going to go on board this mission it would be something like ten weeks of my life, and I operated as a freelancer covering Pacific issues at the time, working out of Auckland. And it was a big decision for me, whether to go for that long although, as a freelancer, I was quite used to going on long missions. Every mission I took, I lived with the people and really tried to identify with the stories I was actually writing about at the time. But this was another order altogether - ten weeks. And Elaine Shaw, who was then head of the small Greenpeace New Zealand office at the time; she persuaded me. She said, "we really need journalists from the southern hemisphere. We really need journalists from New Zealand. We need witnesses there to observe what happens and be part of that," and so on. So she really worked on me for quite a while to persuade me, and in the end I thought, well, why did it take so long to actually sort of persuade me? And then I realise that this was going to be something quite momentous, and I decided fairly early on to write a book about it.