Authorities in Vanuatu are preparing for the worst as Tropical Cyclone Pam inches its way towards the country, looking set to be Vanuatu's most devastating cyclone since 1987.

Authorities in Vanuatu are preparing for the worst, as Tropical Cyclone Pam inches its way towards the country, looking set to be Vanuatu's most devastating cyclone since 1987.

Pam is moving south south-west at 15 kilometers an hour with winds of up to 220 kilometres an hour at its centre.

To the southeast in Fiji, schools have been ordered shut and the military has been deployed across the country to help with any response, while in New Caledonia, people have been advised to prepare emergency supplies.

But Vanuatu looks set to bear the worst of the cyclone, with schools, markets and government offices shut and people being urged to move away from rivers and the coast.

The acting director of the National Disaster Management Office, Peter Korisa, says officials are busy setting up evacuation centres and distributing supplies as the country locks down.

JAMIE TAHANA: As you say the Northern Province is already feeling the effects of this, what kind of reports have you had from there? You have ordered evacuations, but have you heard anything else of what damage it has done?

PK: I think it is too early to get impact report or damage report at the moment we still, it is yellow alert level and we advise them to move to a safer area a safer house. Especially people living in very vulnerable traditional buildings. They need to find a good building where they can be safe. So that is why we have been seeing more on evacuation from various communities. Like I said it is too early to say anything about the actual impact. Until tomorrow or after tomorrow then we can get some more report or information on the impact.

JT: You say you are preparing for the worst though?

PK: Yes in Vila we prepare for the worst because according to the forecast from the Vanuatu meteorology service, the system will develop into five category once the system reaches Port Vila, Efate area. In other words Shefa province and we will be, we currently we looking at preparations and we are ordering people from especially informal settlements around, outside the city into a very, or a stronger, good buildings where they can be safe from the cyclone. Currently we our job at the moment is trying to arrange the evacuation centres we have to negotiate with the church leaders and even the public schools and then they give us permission so we have to we use these buildings as a evacuation.

JT: Further South of Port Vila is expected to take a direct hit and these are quite isolated low lying islands aren't they?

PK: Yes we do understand that there are some areas here not only in borderline, Luganville as well they are very flat areas and there are a lot of communities living along the riverbank and we will expect a lot of flooding along the highway and also sometimes it will be very dangerous for people living along the riverbank. We advise them to move out from those areas and then find another safer place to stay for a while. And then after when the system has passed on from Vanuatu then they can return to their home. 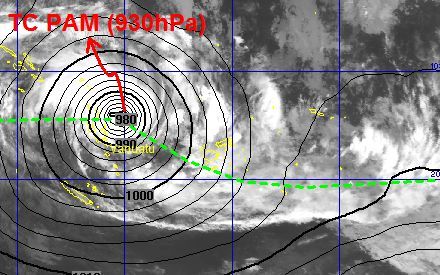