A new exercise craze is taking America's Pacific community by storm, with people gathering in their hundreds dancing and stepping to smooth grooves and pumping baselines. 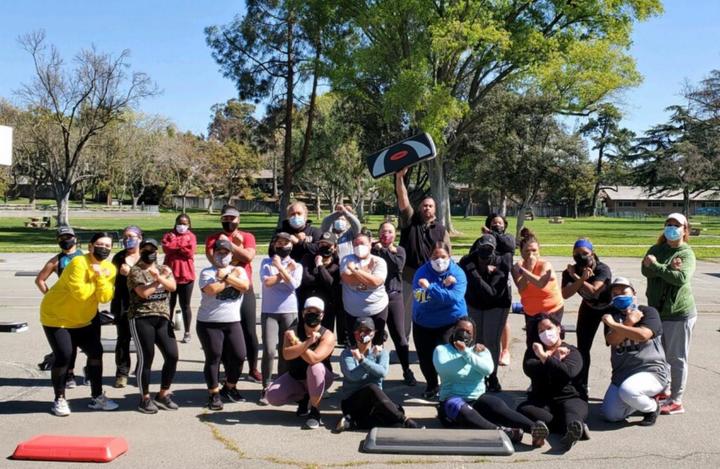 A group of steppers enjoying a workout. Photo: Supplied/Xtreme Hip Hop with Leila

The Fas are the first Polynesian family of 'Extreme Hip Hop with Phil', a programme which uses popular music to get people moving.

"It became a family thing at first we jumped into this brand together and we started taking the creator of the brand," said Leila Fa.

"His name is Philip Weeden. He does live sessions on YouTube that are free, so that's what got us into the interest of doing step and it became more of a family bonding thing and it's actually the only fitness programme that has actually got my family up and active, which is a really good thing." 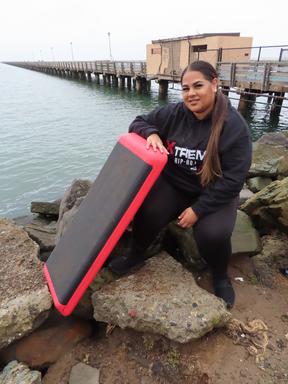 Fa said her family worked out during the pandemic and then her and Tony became instructors by year end.

"From then on. It's really taken off with our Polynesian people. One thing I can say with the Polynesians, whether you're Samoan, Tongan, Hawaiian, Tahitian, is music and dance is the two things that really bring us together and it really is one thing that we all love and enjoy in our culture."

The California-born Tongan believed that was what made the fitness programme so popular with the community. Fa also enjoyed sharing the Polynesian culture with others.

"I was the first Polynesian certified instructor under this Extreme Hip Hop with Phil brand. Right now he has over 1000 instructors. When I first met him, he didn't even know the idea of Polynesians other than the Rock [Dwayne Johnson]...so just to be able to have that push into the brand to be able to expose him to the Polynesian culture was awesome for me."

As far as adding a Pacific flavour to her routines, Fa said although she stuck to Hip Hop tunes for the most part, she loved RnB and some of the slow jams which really resonated with people.

One such routine went viral online, showing a workout with over 200 people from the Pacific community in Utah, exercising to a Tevin Campbell classic.

"You definitely had to be there to really feel it. When I was up there on the stage, just seeing everybody having a good time, especially with everything going on right now with the pandemic and Covid, just to be within the same space and knowing that majority of it was the Polynesians and it was kind of their way of letting go of everything else that was going on in the world and just being able to be in a space of just having fun," Fa said.

"Never [in a] million years did I ever picture that I would be in a room of that many Polynesians doing some realm of fitness and having a good time....it was a beautiful thing to see."

Fa said having the video be viewed by over a million people was a positive.

"Just not only seeing our Polynesian people, but everyone just kind of having a good time, because all we see now on the media is just negative stuff so  it was definitely something good to see."

The popularity of the programme was climbing so much among the Pacific population in West of the US, (particularly in California, Utah and Nevada), that a themed event was now planned for May. 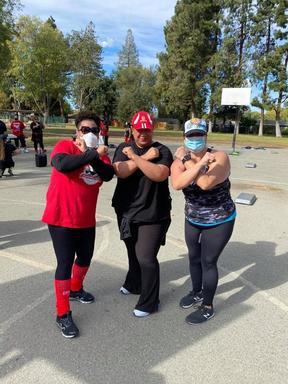 "It's going to be in Utah, but it is basically a poly-themed step event and it's his [Phil Weeden] first ever Polynesian step event or even event where it's tailored to a certain culture of people."

Fa said she felt it was gonna be even bigger than the event shown online.

"We're actually expecting double or even triple the amount of people to attend. We're even pulling people from Hawai'i, from the outskirts of Utah. Even over here in California, Las Vegas, Washington, Texas, so many people from the US that are able to make it they're already planning to come down.

"It's going to be a full on Polynesian-themed experience. We have a step event with him on Friday, Saturday, we will be throwing him a lū'au, where it's gonna expose the Polynesian culture, and really get him to get a sense of what it is other than what he sees with the Rock on TV....but no offence, at least get to see the real Polynesian culture."

Leila Fa said once the borders were open, she hoped to help spread the idea of exercising combining dance and fun, across the Pacific.