There are many sides to Pat Lam, the former Manu Samoa rugby captain who now coaches English Premiership leaders Bristol. 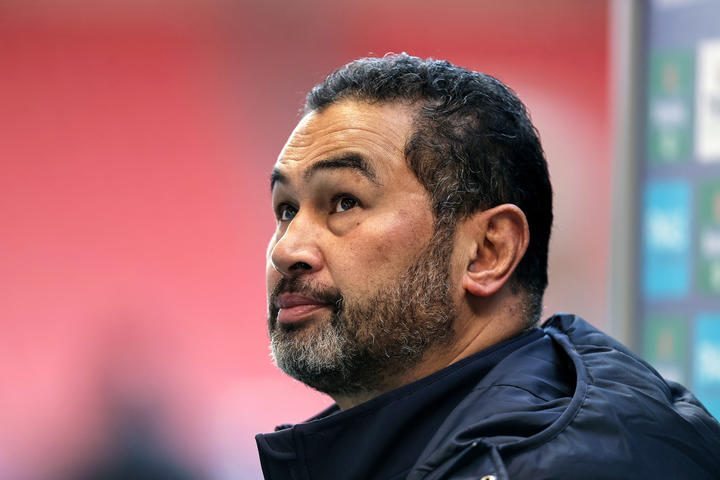 But before the tries, the titles, the test matches - and, yes, the odd tribulation too -  there was a kid growing up in West Auckland who just wanted to play.

"Rugby was the main one because we're talking in the late 70s early 80s...the first day you walk in you're a rugby player and everything's about rugby but now the variety of sports that's available is phenomenal, but softball, cricket, golf - I was into everything."

The son of proud Samoan immigrants, Lam remembered a great childhood but said there was confusion between the Samoan way and the New Zealand way.

"We were certainly brought up with the Samoan way back home and the culture: a lot of family, a lot of cousins, a lot of parties, always with the extended family and obviously with the Lams - my grandfather was one of 23 so there was plenty of them," he recalled. 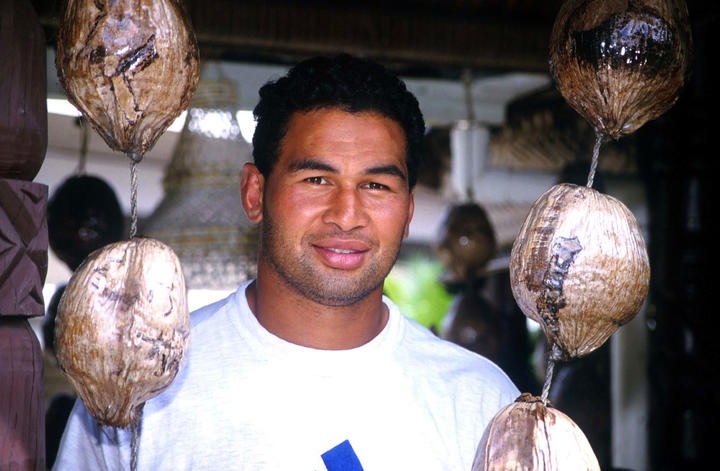 Being good at sport gave Lam an identity and helped him to fit in with his peers.

"It helped my self-esteem and who I was by being good at sport because suddenly you realise you're different, you realise that you're bigger than some of the other kids.

"Sport was the one that everyone says: 'oh you're good, can I have you in my team," and it made you feel special." 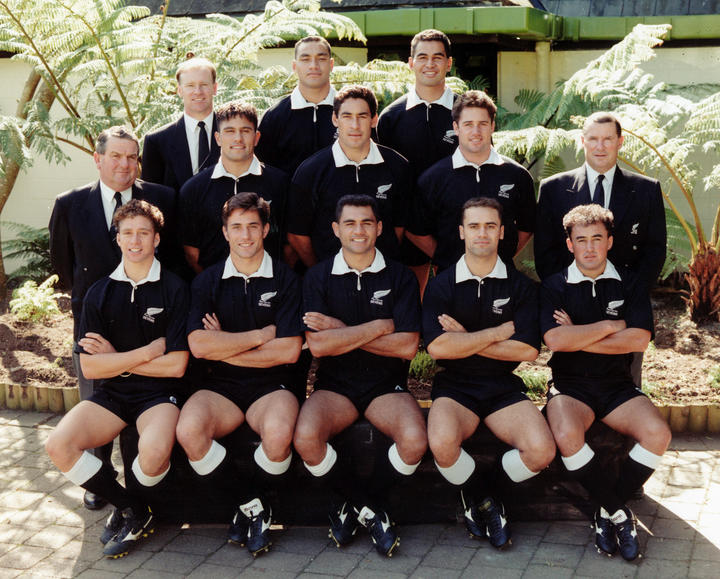 After representing the New Zealand Schoolboys, Colts and Sevens sides, Lam broke into the champion Auckland team in 1990, and quickly discovered what it would take to make it at the top level.

"I learnt that professionalism isn't about getting paid money, it's about the way you do things," he said.

"Certainly that Auckland team...the greats: John Kirwan, the Whettons, the Fox's, Joe Stanley, Michael Jones, the Brooke brothers. All of these guys you learnt that it was about being at your best and pushing and trying to develop - all of the things that teams do now but they were doing it in the amateur days." 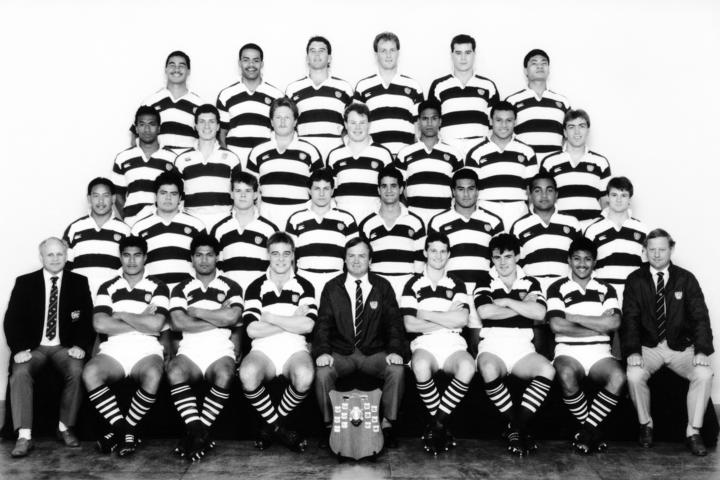 Pat Lam (top left) was a part of the legendary Auckland team in the early 1990s. Photo: PHOTOSPORT

Lam made his test debut in Samoa's historic win over Wales at the 1991 Rugby World Cup and 30 years on it remained a career highlight.

"It's what it did for Samoan people. You've got to remember back in the 90s...they were seen as the people who work in the factories and so forth but I remember after that...the pride it had for not only Samoans but all Pacific Islanders around the world was huge.

"It put us on the rugby map and opened up the avenue for the first test match against the All Blacks, against Australia...we got invitations and everything. It was a huge huge moment." 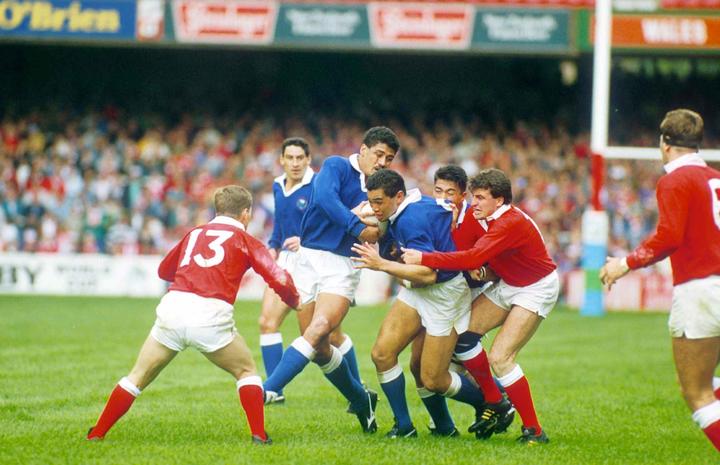 "I remember as a school teacher coming back (from the World Cup) and teaching in Auckland. A lot of the kids were all about being All Blacks but the Samoan boys started to change and said: "Mr Lam I want to be a Manu Samoa player," and that was special.

"That was why it was a massive highlight because it transcended just a game. It was more than that and people today, even when I go to Wales, people still talk about it."

Lam made one appearance for the All Blacks in a midweek game against Sydney in 1992 before resuming his career with Manu Samoa, eventually going on to play in 34 tests.

The former Crusaders number eight first dipped his toes into the coaching ranks during his final season with the Newcastle Falcons in England, when his former boss at Northampton, Sir Ian McGeechan, asked him to help out with Scotland. 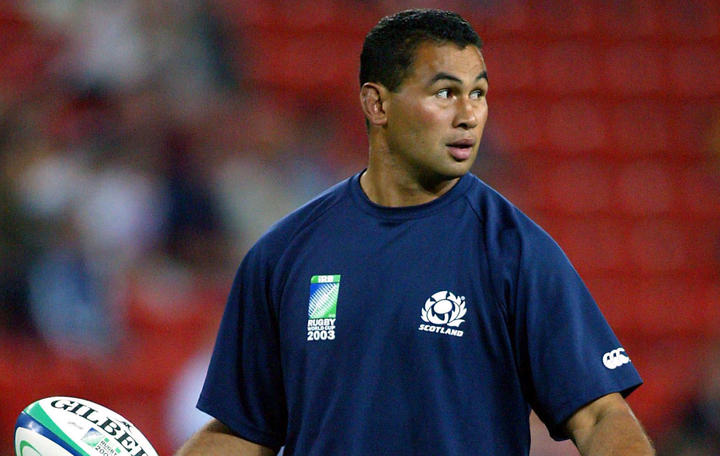 The former school teacher always loved goal setting and said coaching gave him an avenue to combine two of his biggest passions.

"Certainly with teaching that's effectively what you're doing: here's the goal at the end of the year, you need to learn all the different things and here's the plan. I'm going to do everything I can to help you get there but you've got to do the work but I'll certainly help guide you and that's what I had a real passion about. As it turned out, with rugby there was a lot of similarities."

By 2004 the former Auckland player found himself coaching his old province when Sir Graham Henry was elevated into the All Blacks job, before a more challenging tenure with the Blues.

Lam guided Connacht to an unlikely Pro12 title in 2016 before moving on to the Bristol Bears, who have risen from the second tier championship to the top of the premiership standings in less than four years. 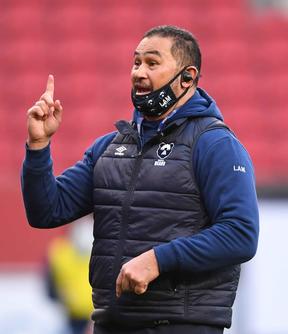 "We are an example of how the world can exist. We've got players from all sorts of different cultures, countries," he enthused. 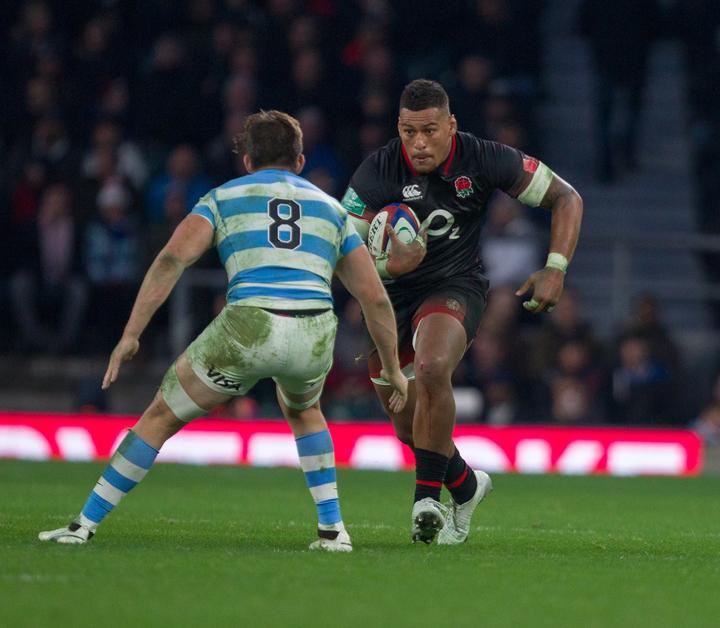 The Bears won their first European trophy five months ago and currently sit six points clear of reigning champions Exeter, with three games to play before the playoffs.

But even if they don't win the race to the top of the mountain this season, Pat Lam: father of five, husband of Steph, proud Kiwi and proud Samoan, is loving every moment.

"Sport and life is about the relationships, it's about the people you meet, it's the learning that you take, it's perspective."