For Mose Masoe it's the little things, like being able to get up off the ground or feed himself dinner.

14 months after suffering a career-ending spinal injury in a pre-season match for English club Hull Kingston Rovers, the Toa Samoa rugby league international is upbeat about his recovery but mindful that nothing is guaranteed. 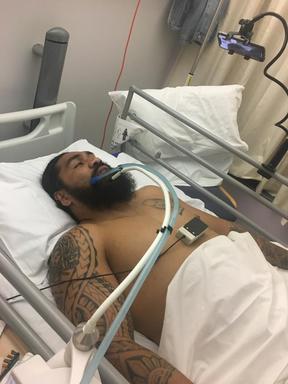 The 2014 Super League winner was told he might never walk again but in September - just eight months after being forced into early retirement - Masoe took his first unaided steps.

The first 18 months of the recovery phrase are crucial and Masoe has learnt to be patient.

"You tend to get a lot of things back in that time and then after that it kind of plateaus. I'm just thinking it's 18 months - it's month 13 now and I still have got to keep chipping away, finding new things to do and hopefully the signals get from my brain through my spinal chord down to what I'm trying to achieve but you've just got to keep at it."

Mose Masoe moved to Australia in 2008 after signing a contract with the Sydney Roosters and made his NRL debut two years later against the Gold Coast Titans.

The New Zealand born prop, who also played for the Penrith Panthers and St Helens Saints during a decade-long first grade career, said his injury has made him appreciate the simple things that many take for granted.

"To get up off the ground might sound insignificant to other people but getting off the ground for myself is massive - it's taken me three months now.

"Hopefully I can wean myself off the crutches and be more active outside without crutches, and if I do take a fall I'll be able to pick myself up off the ground so that was a massive thing for myself." 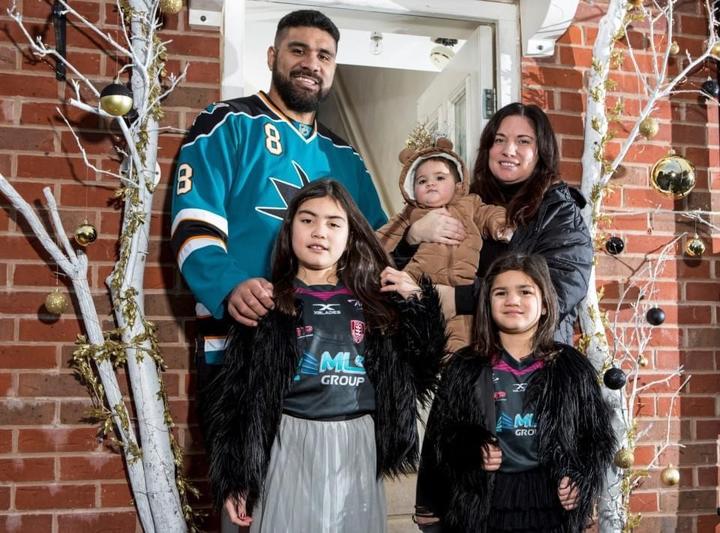 Mose Masoe and his family nearly a year after his accident. Photo: Supplied/Mose Masoe

Masoe's partner Carissa and their three children, including son Lui who was born in July, have been by his side throughout.

Covid-19 lockdowns have added some complications but his eldest daughter has learnt to make her dad coffee for breakfast while everyone has chipped in, fetching items from upstairs or off the ground to make life a little easier.

"The kids were spending their time, the weekends, in hospital with me so they've pretty much been in lockdown for over a year now, my family, but they're really positive and they bring a big smile to my face and kids are adaptable and they've really helped me along the way and made my journey so much easier."

The support of friends and extended family has also been crucial to Masoe's ongoing recovery, with Carissa's cousin flying over to the UK when the injury first happened, followed a couple of weeks later by Masoe's sister and a couple of close friends just before the UK went into lockdown.

"They've seen me at my worst but at the same time they were so much help (to me,) Carissa and the kids," he said.

"(Things like) taking the kids to school because we still live about an hour away from the specialist hospital where I was at so Carissa will be at hospital with me all day and then she will have to rush back and pick up the kids - an hours drive - and then she will try and drive back and bring the kids to see me after school and things like that so having family and friends here was a great help." 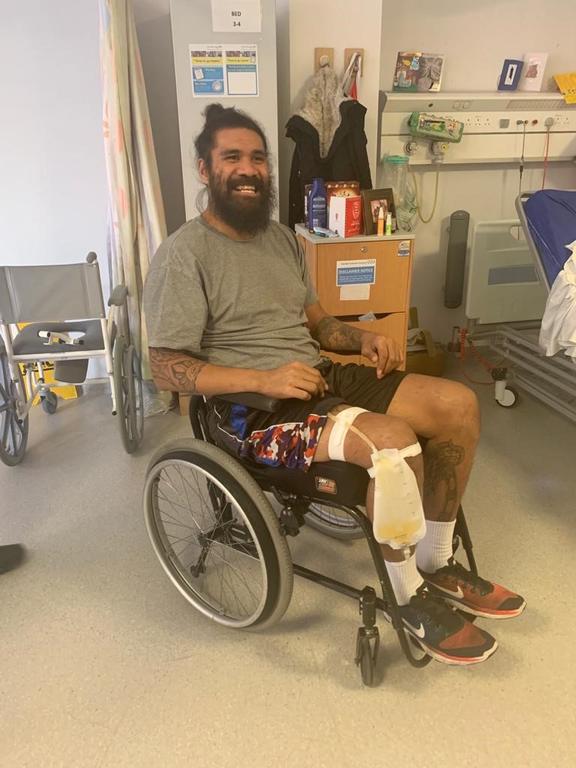 Mose Masoe sitting up for the first time after seven weeks of lying flat in a hospital bed. Photo: Supplied/Mose Masoe

Masoe said he remembered reading about it and feeling really sad, never thinking he would find himself in a similar situation only days later.

Both men have documented their rehabilitation journeys on social media and Masoe said he'd been inspired by the progress Fatialofa is making.

"I got to Facetime him a few times and just keep in touch and I watch all his Instagram videos of him back home and he's doing really well so I'm stoked to see how far he's progressed. It gives me a lot of hope as well because I'm trying to push to get to where he is now so he's leading the way and I'm following."

Hull Kingston Rovers are due to kick off their Super League campaign against the Catalan Dragons at the end of the month and Masoe is hopeful he'll be able to cheer on his teammates in person when Covid-19 restrictions allow.

While he is unable to join his teammates on the field, Masoe is grateful for the career he has had, the friends he's made and the opportunity to play the game he loves.

But with his contract and residents visa expiring at the end of the season it will soon be time for their growing clan to pack up and return to the Southern Hemisphere.

Masoe has a son who lives in Brisbane, while his partner's family is from Australia.

After focusing on his rehab and recovery for the first 12 months, Masoe has begun to think about what might be next.

"Now I've started to get a few little things back I really kind of started to think of what kind of jobs I can do after this. I'm leaning towards a lot of mentoring sort of counselling jobs in the mental health sector so I've got to start doing a bit of study and hopefully I can get a gig when I get back to Australia."

Masoe has received support from the Rugby League Cares charity while a Just Giving fundraising campaign to support his ongoing recovery is three quarters of the way to its £150,000 target.

The future might be uncertain but the proud father of four is staying patient and continuing the grind.