Pacific Oceania are riding high after sweeping to victory in their Junior Fed Cup tennis tournament in India.

The team of Carol Lee from the CNMI, Tahiti's Naia Guitton and Eleanor Schuster from Samoa won their pool without dropping a set before defeating Singapore in the semi finals and accounting for Sri Lanka 2-0 in the final on Friday.

Team captain Brittany Teei was impressed by their work ethic and ability to execute the game plan in pressure situations.

"Just their ability and willingness to execute on the plans that we were talking about throughout the match," she said.

"I've been in their position before so watching them go through all the emotion and be able to manage themselves, as well as perform, I was really proud." 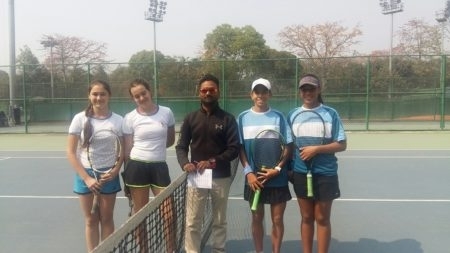 Brittany Teei said success in the Asia/Oceania Pre-Qualifying event in New Delhi will do wonders for the players' confidence.

"It's all about getting exposure at this age and being able to compete against other top players," she said.

"I think that's the best thing about it is that these girls get to play the top girls from other countries and when they're seeing that they're able to win they start to really believe in themselves.

"I think anything we can do for our young athletes to make them feel that way is so valuable."

Brittany Teei said that's likely to see them come up against the likes of Australia, New Zealand and China.