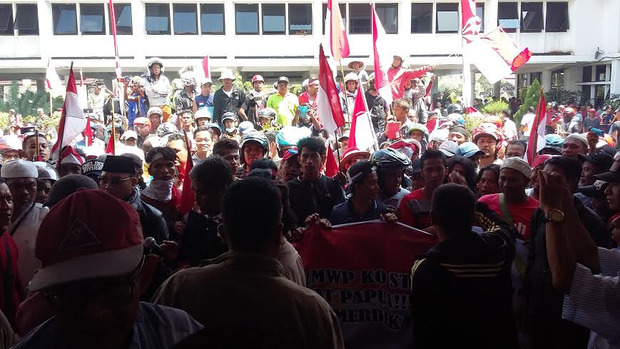 A large anti-independence rally has been held by transmigrants in the capital of Indonesia's Papua province, Jayapura.

The demonstrators, who numbered over a thousand, were mainly non-Papuans who carried Indonesian flags as they called for authorities to ban groups pushing for an independence referendum.

This comes after a series of large, peaceful demonstrations over the past two months in urban centres across Papua in support of the United Liberation Movement for West Papua.

The largest and most widespread demonstrations occurred on May 2nd when police arrested about 2,000 people in Jayapura alone.

After the latest demonstration, by the pro-Indonesia migrants, a Papuan church leader warned about mobilisation of a new wave of militia units being created by the security forces to counter the surge in Papuan civil resistance.

The President of the Fellowship of Baptist Churches in West Papua, Reverend Socratez Yoman, said that the groups had been formed largely by non-Papuan settlers who claimed that West Papua no longer belongs to Papuans, but to Indonesia.

The state-assisted transmigration programme facilitated the re-settlement of Indonesians from other parts of the republic in Papua for decades, leaving the indigenous Melanesians of Papua a minority in their own land, marginalised from their land and resources, and their culture overwhelmed.

Tabloid Jubi reported a spokesman for the People's Front of Indonesia Sovereignty, Umar, as saying that people from many parts of society joined their demonstration because they all wanted communities to work together to develop a better Papua.

"We've always been silent and now we want to show to Papua that we exist and continue to support Papua to keep integrating with Indonesia," he said.

"We also ask the British government to arrest (Liberation movement international spokesman) Benny Wenda and transfer him to the Indonesian government because he is a wanted person," he told Jubi. 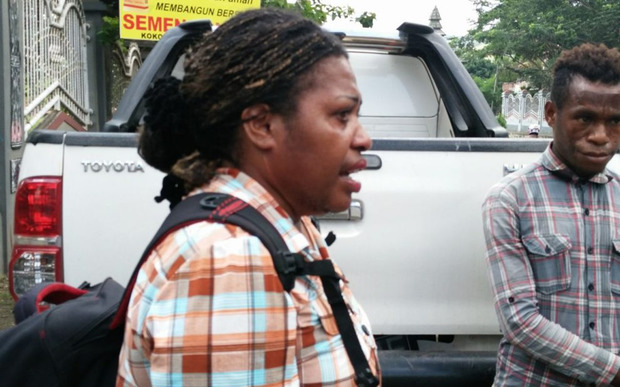 Papuan woman, alleged to have been assaulted Photo: supplied

Jubi reported that the crowd who directed the demonstration to the Papua House of Representatives in Jayapura assaulted at least two Papuans on the way.

One victim, Hendrika Kowenip, said she was assaulted by demonstrators after asking about the purpose of their rally.

The demonstrators were mostly from transmigrant-deminated areas such as Koya, Arso and Muara Tami.

Meanwhile, Reverend Socratez said the demonstrators and militia groups were echoing the terror campaigns of Indonesian forces in East Timor during the violence-marked phase before independence was gained.

He warned that the situation in Papua was deteriorating and called for humanitarian intervention from the United Nations.