Nauru's Government says it will release video footage of a recent protest at the parliament to prove it was justified in cracking down on what it calls a violent riot. 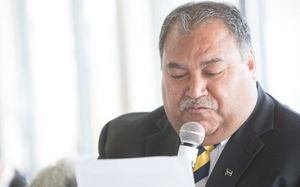 The government has been strongly criticised for arresting opposition MPs but claims foreign media outlets are dishonest in describing the event as a protest.

The Justice Minister, David Adeang, who has also been criticised for cancelling the passport of another opposition MP, Roland Kun, says Mr Kun's behaviour is being investigated and the threat posed by MPs was very real.

He says fireworks were set off in the crowd and a number of police officers were injured.

The Nauru Government has previously detailed that about 10 police were injured, with some needing hospital treatment, others with dehydration and headaches.

The Opposition MPs Sprent Dabwido, Mathew Batsuia and Squire Jeremiah are all facing charges over the protests.