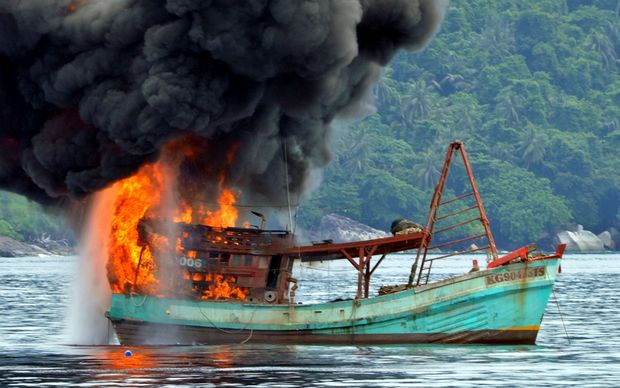 A Vietnamese fishing boat in flames after the Indonesian military blew it up for fishing illegally. Photo: AFP

President Joko Widodo has reinstituted the practice of navy and police detaining and sinking foreign fishing vessels found to be illegally fishing in Indonesia's waters.

Indonesia has sunk at least half a dozen such vessels in the past couple of months.

Stuart Campbell of Wildlife Conservation Society says Jakarta wants to deter the many large vessels from countries to the north which have plundered Indonesia's waters for decades with impunity.

"I'm seeing a greater effort to be a bit more hardline on the protection of natural resources in the marine sphere. So many livelihoods depend on it, they realise they're losing a great economic advantage from letting their resources just slip out of the country without making any profits."