A rally in the Indonesian city of Yogyakarta is planned for today to protest the jailing of two French journalists arrested in West Papua. 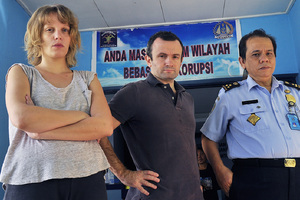 Valentine Bourrat and Thomas Dandois have been in prison since early August, when they were arrested for reporting without a press visa.

Their case was handed over to Papua's chief prosecutor, and a decision on whether the pair will go to court is expected this week.

They face up to five years in prison if convicted.

The Alliance of Papuan Students says it is organising a peaceful demonstration in Yogyakarta today, and the secretary of the alliance in that city, Telius Yikwa, says foreign journalists should be free to report from Papua and West Papua.

He says the group is asking for the unconditional release of the journalists.

29 members of the West Papua National Committee, or KNPB, have now been released by police, after their arrest at a rally in support of the journalists in Jayapura yesterday.