Emily Mwila at the Met 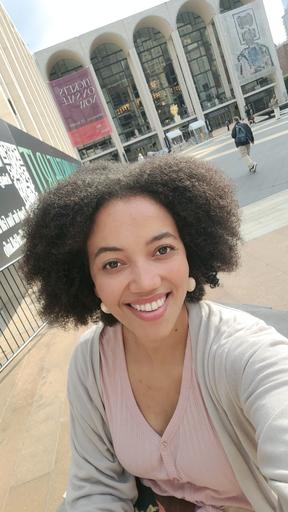 New Zealand soprano Emily Mwila is about to appear at the Metropolitan Opera, in the chorus for Gershwin’s Porgy and Bess.

Emily’s stage debut was for Wellington’s Eternity Opera in 2016, singing Zerlina in Mozart’s Don Giovanni, and then the following year she sang Susannah for Eternity’s Marriage of Figaro.

She’s twice been a semi-finalist in the Lexus Song Quest, and was a familiar sight (and sound) in the capital singing on the streets as a busker.

Emily moved to New York in 2016, studying for her Masters at the Mannes School of Music, where she has performed music from Bach through to Kurt Weill – and is, understandably, rather excited to be singing on the stage of the Met!

"The past year-and-a-half has been such a dark period for the performing arts," says Emily, "so I feel especially blessed to be part of this production [of Porgy and Bess] as New York slowly comes back to life."

"Can't believe I'll get to sing on the same stage as so many of the singers that I admire."