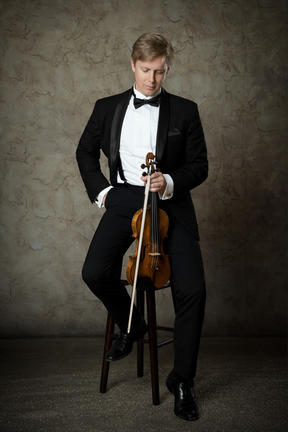 Violinist Benjamin Morrison grew up in Christchurch studying with Stephen Larsen, and studied in Wellington with NZSO concertmaster Vesa Matti-Leppänen.

At that time, as well as playing in the New Zealand Symphony Orchestra, Ben was concertmaster of the NZSO National Youth Orchestra.

Fast-forward to the present day, and Ben is now a principal first violinist with the Vienna Philharmonic Orchestra – the first and only New Zealander to have achieved a place in this prestigious ensemble, which is often described as being one of the finest orchestras in the world.

He's in New Zealand for concerts with the Auckland Philharmonia Orchestra, and a solo recital at The Arts Centre in Christchurch.

Upbeat caught up with Benjamin Morrison the morning after his performance of Brahms’s Violin Concerto with the APO conducted by Giordano Bellincampi.