NZ Opera’s current production of Rossini’s Il Barbiere di Siviglia (The Barber of Seville) pulls out all the stops to put the comic into comic opera. 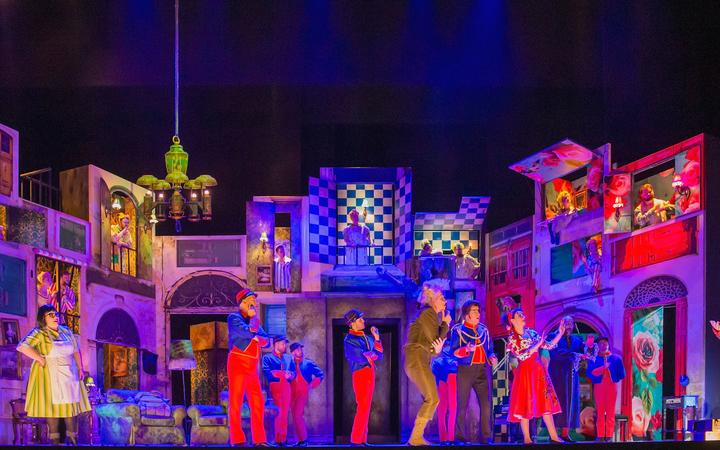 This opera is a prequel to Mozart’s Marriage of Figaro which NZ Opera performed in 2010.

Both operas are frothy, fast paced, and full of confusion that is all resolved happily in the end.

Both operas are based on plays by the 18th century French writer Pierre Beaumarchais which were considered subversive in their day for their mockery of authority and aristocracy.

But NZ Opera’s Barber is no worthy political tract.

It aims to please rather than agitate and admirably succeeds.

The towering set works as a public square in Seville as well as the interior of Bartolo’s house with clever use of sliding sets, windows, and doors.

The bright, colourful set and props are enhanced with clever lighting that moves the pace along.

The costumes are a joy in themselves. They’re varied, bright, and nod knowingly to various pop culture icons.

A lot of time has been spent on hair that put the bouffant into opera buffa.

The costumes also let the performers move easily which is just as well as this is a very kinetic production.

Characters energetically scurry up and down stairs and burst through and in and out of doors and windows. 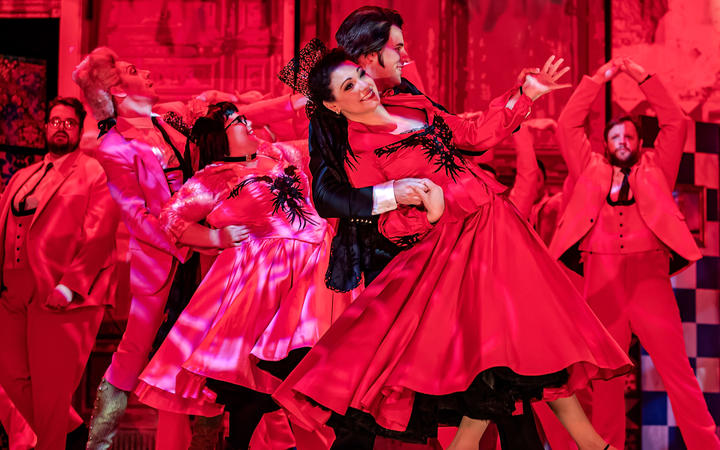 There’s a lot of amusing business going on throughout the opera.

Jesse Wikiriwhi managed to fill all his scenes without a sound as the shuffling Rocky Horror refugee servant Ambrogio.

There was much to delight the eye and a lot of action to follow but how did it sound?

Well, it sounded very good indeed. The APO was as polished and assured as ever.

The elegant and powerful overture set the energy level at high.

I loved the scraping sounds of slander the strings gave us in ‘La calunnia è un venticello.’

David Kelly’s continuo on fortepiano was measured and effectively filled out the recitative passages.

Barkin Sertkaya’s fine guitar playing added colour to the orchestral score and he was a major presence without singing a word. 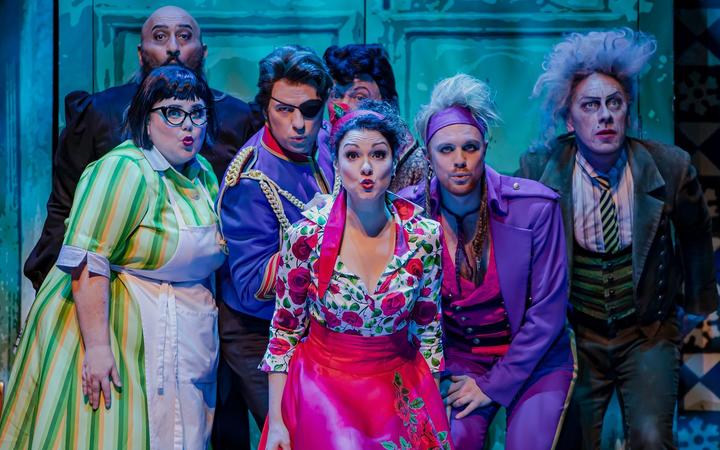 As for those who sang, they were all strong, colourful, and full of character.

Sandra Piques Eddy’s Rosina was someone not to be trifled with a lot of brains, attitude, and a rich voice full of varied hues.

Her ‘Una voce poco fa’ (probably the opera’s most famous aria after THE famous one) was fiery and challenging.

John Tessier’s Almaviva was full of shades from mock-drunkenness, to loving tenderness and some vocal performance anxiety in his wooing by song.

The couple’s fake singing lesson was one of the highlights.

Andrew Collis as Bartolo and Ashraf Sewalam as Don Basilo were the baddies and relished their roles with flexible and characterful singing.

A special shout out to Morag Aitchison’s Berta who was a gem to watch and even better to hear. Her strong, supple voice made ‘Il vecchiotto cerca moglie’ suitably scathing. 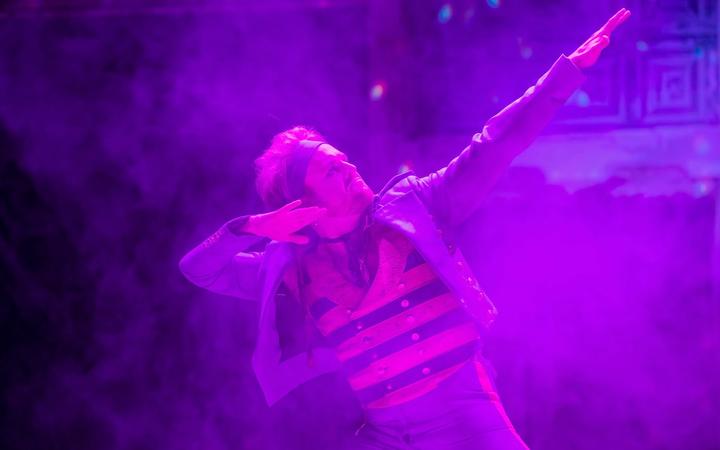 No show without Figaro and from his madcap entrance through the audience on to the stage Morgan Pearse gave a rollicking performance that channelled Jack Sparrow and Tim Minchin.

Energetic, charming, and in control of the music’s demanding passage work, Pearse’s Figaro provided the heart of this likeable and light-hearted operatic romp.

The singers all had fun with the frantically paced back and forth patter of a lot of the music especially in the big ensemble scenes.

This is a funny and entertaining opera but I found that some of the music dragged and it has fewer really distinctive arias than Rossini’s next opera La Cenerentola of 1817.

But The Barber marks the debut of his revolution in operatic comedy and has delighted audiences for two hundred years since its debut.

NZ Opera’s fast, bright, and witty production continues this tradition and as with all proper happy endings, in the end love and laughter triumph over useless precautions.

The Barber of Seville opens in Wellington on June 29 and in Christchurch on August 1.