An expanded APO filled the stage and the choir seats of the Auckland Town Hall on Saturday night to cap 2019’s Arts Festival with an exhilarating performance of Olivier Messiaen’s sprawling Turangalîla-Symphonie.

This is a large work in every sense. 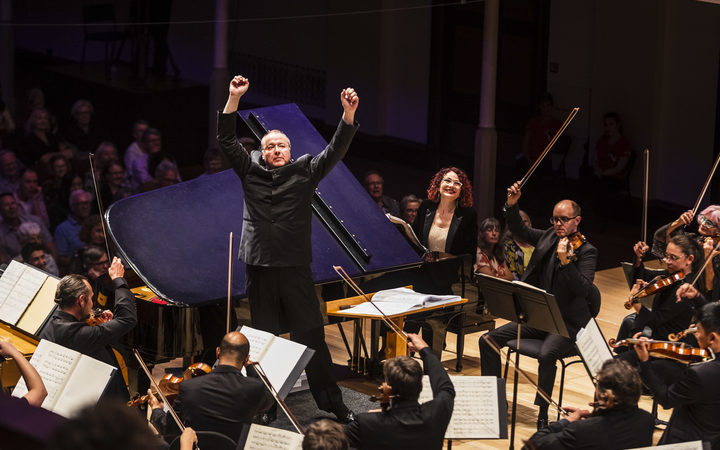 It takes 80 minutes and calls for over a hundred musicians, piano, and the rarely heard electronic instrument, the ondes Martenot. The dynamics range from heavy metal level fortississimo to lute-like pianissimo.

The Symphonie’s rhythms, structures, and harmonic relations are all incredibly complex and varied.

It is an uncompromising piece of music. But conductor Stefan Asbury and the APO along with soloists Joanna McGregor and Cynthia Millar never flagged during this spectacular concert.

From its entry with the piano in the first movement this exotic instrument added an ethereal edge to the music.

However, time and popular culture have added layers of associations to its swooping other- worldly radiophonic sounds. Rather than being the cutting edge, modernist, sound of the future, it now tends to suggest B grade science fiction films.

But when merged with the circling and shimmering harmonies of the 6th movement, Jardin du sommeil d’amour, it produced the sense of timelessness and transcendence that the work is about.

Joanna MacGregor’s piano playing throughout the performance was precise and powerful. Percussive when needed and also delicate as in the sixth movement where she supplied a fluttering background of birdsong effects and phrases.

The fifth movement, Joie du Sang des Étoiles, was a highlight and the orchestra flung itself into this dancing maelstrom with power and abandon. The rich textures were filled out by the celesta and ondes Martenot going full tilt.

A wild piano cadenza led into the final stupendous chords.

The playing throughout this huge work was controlled and exact.

Stefan Asbury’s conducting led us through this thicket of themes and motifs with logic and coherence. The musicians captured all the extreme contrasts in the work from the pure and delicate to the fiery and brutal.

They kept enough energy in reserve to serve up an exuberant, joyous, and triumphant final movement that brought many in the audience to their feet.

This gargantuan work is a mixture of atonality, kitsch romanticism, and exotic soundscapes. Parts of it seem almost twee and pointless.

In many ways it seems completely irrelevant to the way we live now.

Before the performance, the orchestra’s CEO Barbara Glaser dedicated the concert to the victims of the Christchurch shootings and finished her introduction with the words ‘Salaam, shalom, peace, aroha’.

The Turangalîla-Symphonie took us into the heart of those words.