A new orchestral work being premiered by the Manukau Symphony Orchestra comes with the explicit instruction from its composer “no conductor”. Instead, each player is asked to play each note when they think it should be played.

Once described by the New Zealand Listener as the ‘enfant terrible’ of New Zealand music, the composer of this work is the rather original Warwick Blair. The work ‘Tamāhine (Daughter)’ is “for any number of performers and electronics” and will be played at Manukau Symphony’s Bolero concert Saturday 9 March in South Auckland.

Conductorless orchestras are not uncommon (early orchestras for instance didn’t have them), but leaderless ensembles are generally smaller and certainly the instruction for players to do 'their own thing’ is unusual.

Influenced by the Maori concept of family, Tamāhine is one of three works in Blair’s Whānau (family) series. The works honour members of Blair’s immediate family, with each represented by a field recording that “best sums up their environment, that they themselves have chosen”. In the case of Tamāhine, recordings of supermarket checkout beeps are woven into the live sounds of the orchestra.

Warwick Blair’s work has been crossing musical worlds, cultures and genres since the late 1980s. Warwick has worked in New Zealand and overseas with both orchestras and electronic artists, and often combined the two. He has played in pop and rock bands in London, lectured in contemporary music and composed for orchestras and corporates, soundtracks and classical concerts.

Blair’s work isn’t the only unusual element of the Manukau Symphony’s Bolero concert. It features three soloists in three pieces, and conductor Ray Chan is also showcasing his talents on the piano. 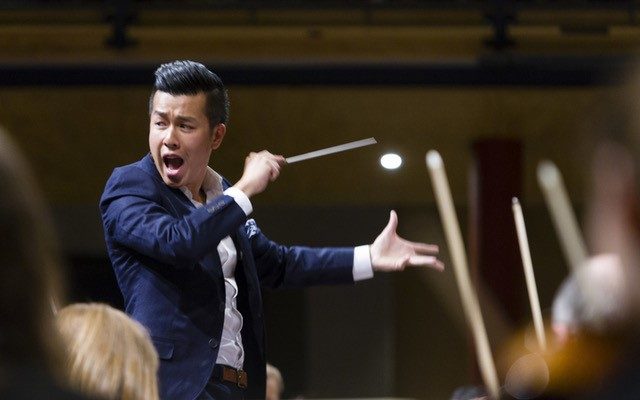 Chan isn’t flustered by the idea of stepping away from the conductor’s podium for Warwick Blair’s work.

“I remember doing the entire cycle of the Brandenburg Concerti from the keyboard in my undergraduate days and the fact that there was no 'conductor' created an incredibly organic, chamber musical experience on and off-stage.

“I'm sure the same sense of organic music-making will occur. Players also react very differently without someone standing on the podium. Our audiences can expect to be treated to a completely different sonic and visual experience. The goal is to allow them to receive an almost uncontrolled and improvisational experience 'as it is' - without dictated or intended meaning.

“It offers an alternative to the otherwise structured and journeyed offerings we are usually accustomed to.”

Chan is interested in presenting a wide variety of works of different genre, size and renown. Bolero features everything from Blair’s work to the 1812 Overture – although he’s staying mum ahead of the concert as to whether it will feature cannons.

“We have heard the age-old saying that music is in essence a language. Te Pūoro Māori is as distinct a language as Peking Opera, just as Javanese Gamelan is to Western Classical Music. Each comes with unique rules, expressions and cultural idioms that may not come 'naturally' to many people. Therefore, I think it's incredibly important to offer effectively varied programmes like these to share, connect and 'talk' about what classical music can sound like in the hope they will do their job in opening the first of many doors to appreciating this unique language.”

Chan believes that arts organisations need to embrace the changing nature of audiences in this new century by innovating.  He notes that in the places internationally where its most notable that the audiences have changed it has been the result of arts organisations being dedicated and consistently innovative.

“They have identified this as one of, if not the most important factor of audience development. I believe that as long as arts organisations truly embrace the changing tides that come with the 21st century - dedicate themselves to innovating the concert experience and prioritise future audience development as the backbone of their model, we will continue to see positive change in our audiences locally and globally.”

Resident in the Vodafone Events Centre in Manukau the Manukau Symphony Orchestra is presenting four concerts in their 2019 programme.