Female conductors are not a new thing, but all too often their work does not garner the attention it deserves. 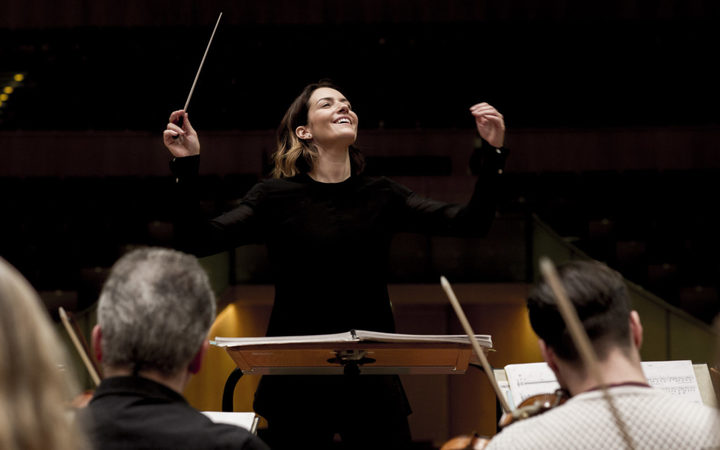 Amanda Brown profiles women who have blazed a trail in the highly competitive world of orchestral conducting and been instrumental in getting superb female conductors seen on the world’s greatest podiums.

Boulanger composed music until 1918, then turned to conducting. In 1937 she was the first woman to conduct the Royal Philharmonic Orchestra, and broke the gender barrier with almost every other major orchestra. She also taught an entire generation of composers including Aaron Copland. When asked how she felt about making history for women everywhere, Boulanger replied that she had been a woman for a little over 50 years and had gotten over her initial astonishment.

Fun fact: Boulanger selected and conducted most of the music played at the wedding of Prince Ranier of Monaco and Grace Kelly. 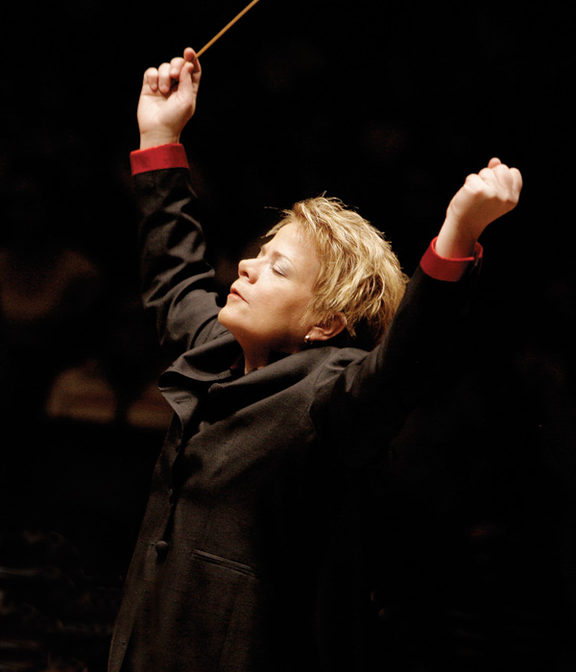 The ultimate glass-ceiling breaker, Marin Alsop is an inspiring and powerful voice in the international music scene. Alsop believes that "Music has the power to change lives” and in 2007 made history as the first female Music Director of a major American orchestra, the Baltimore symphony. Previously Principal Conductor of the Bournemouth Symphony Orchestra (2002-2008), she also leads the Sao Paolo Symphony Orchestra as Music Director of their highly creative programming and outreach activities.

In 2013, Alsop was the first female to conduct the BBC’s Last Night of the Proms, which she returned to conduct in 2015. “As Alsop faced the cellos and drew from them the most tremendously shaped phrases with every inflection of her baton, you were well aware of being in the presence of greatness.’ (MUSICOMH.COM)

2019 will see Alsop in her first season as Chief Conductor of the Vienna Radio Symphony Orchestra.

And she’s passing the baton on to young women conductors; when Alsop received a MacArthur grant in 2005, she gave the money toward the endowment of her Taki Concordia Fellowship which actively develops female conductors. Alsop also leads conducting classes for young women in London as part of her desire to confront the gender gap in orchestral conducting. 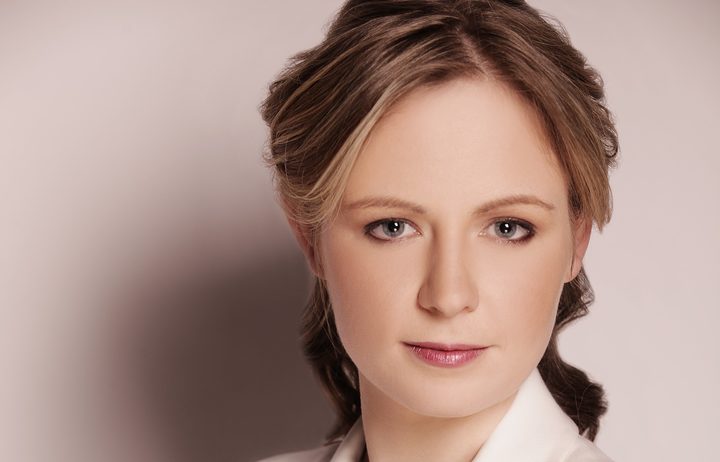 Young New Zealand conductor Gemma New doesn’t believe in the glass ceiling and has already established herself in North America as a conductor to watch.

Sought after for her insightful interpretations and dynamic presence, New is Music Director for the Hamilton Philharmonic Orchestra in Ontario, Canada and Resident Conductor for the St. Louis Symphony Orchestra.

In the current season New is guest conductor with Los Angeles Chamber Orchestra, CMI Chamber Orchestra of San Antonio, and Santa Fe Pro Musica, as well as the Philharmonic Orchestras of Calgary, Louisiana and Rochester, the Symphony Orchestras of Charlotte, Detroit, Drummondville, Jacksonville, San Diego, Toronto, Tucson, and Winnipeg, the Florida Orchestra and the Brandenburgisches Staatsorchester in Germany.

In 2014 she was a Dudamel Conducting Fellow with the Los Angeles Philharmonic, in 2017 she was the recipient of a Career Assistance Award from The Solti Foundation U.S. and this year served as a Conducting Fellow at Tanglewood Music Center. 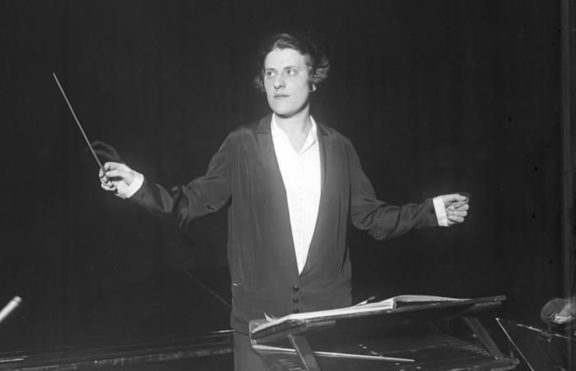 Brico’s debut as a professional conductor came in 1930 with the Berlin Philharmonic. That appearance, as well as subsequent ones with the Los Angeles Symphony, the San Francisco Symphony, and the Hamburg Philharmonic, was highly praised by critics. Brico followed hot on Nadia Boulanger’s heels in America as the first woman to conduct the New York Philharmonic in 1938.

She toured Europe extensively as a celebrated concert pianist and conductor and was invited by Jean Sibelius to conduct the Helsinki Symphony Orchestra in a programme of his own music. After settling in Denver, Colorado she founded the Brico Symphony Orchestra and conducted the Denver and Boulder Symphonies for many years.

Acclaimed by the New York Times as ‘one of the finest conductors of her generation’, Falletta has been Music Director of the Virginia Symphony Orchestra since 1991, and the Buffalo Philharmonic since 1998, the first woman to lead a major US orchestra. She has been credited with bringing the Buffalo Philhrmonic to a new level of national and international prominence; it’s now one of the most recorded orchestras in the US. She has guest conducted many of the world’s finest orchestras and has premiered over 100 new works.

Fun fact: JoAnn Falletta is featured in the latest Macy’s advertising campaign in the US. Titled Remarkable You the campaign promotes women in leadership roles.

Martinez made history when she was the first woman to ever conduct the BBC Proms concert at the Royal Albert Hall in 1984. Since then she has been invited regularly to conduct at the Proms including a special performance in 1994 of Dame Ethyl Smyth’s opera The Wreckers. In 1976 Martinez founded the Lontano Chamber Ensemble and the European Women’s Orchestra. She is a Fellow of the Royal Academy of Music and founder of the record label, LORELT, which concentrates on music neglected by many recording companies, contemporary composers, women composers and those from Latin America.

Alondra de la Parra has gained widespread attention for her spellbinding and vibrant performances and her commitment to Latin American composers. In 2004, at age 23, she  founded the Grammy award winning Orchestra of the Americas which describes itself as ‘A next generation symphony orchestra of the best from two continents. Empowering musicians and communities.’ In 2017 she was appointed Principal Conductor of the Queensland Symphony, the first woman to hold any such position in Australia.

Alondra is known for her progressive, flexible attitude to conducting. She’s at the forefront of a new generation of conductors; visibly engaging with the audience and the community, and treating both the orchestra and the audience as equals.

From Assistant Conductor of the LA Philharmonic at age 29, Mirga Gražinytė-Tyla followed in the footsteps of Sir Simon Rattle, Sakari Ormo and Andris Nelsons when she was appointed principal Conductor of the City of Birmingham Symphony Orchestra, one of the country’s most prestigious ensembles. Grazinyte-Tyla is just the third woman to be chief conductor of a major British orchestra.

In 2018 she teamed up with young British cellist Sheku Kenneh-Mason for his debut album ‘Inspiration’, which made international chart history. Described as a combination of flamboyance and steely poise on the podium (Financial Times) Gražinytė-Tyla has electrified audiences as guest conductor all over the world.

Fun fact: Mirga added the suffix ‘Tyla’, meaning silence, to her name a few years ago. She said “I love the crazy beauty in the music itself, but I also love the silence. So many crucial moments come out of silence.”

With ‘Unmatched for podium presence” (New York Classical Review) and an “ability to create viscerally arresting performances” (LA Times), Susanna Mälkki is one of today’s most sought-after conductors on both the concert stage and in leading opera houses.

In 2004 she debuted with the Ensemble Intercontemporaine, Paris (founded by Pierre Boulez in 1972), the first woman to hold the post of Music Director. She was appointed Principal Guest Conductor of the LA Philharmonic in 2016 and is currently in her third year as Chief Conductor of the Helsinki Philharmonic. In 2017 Malkki was named Musical America’s Conductor of the Year.

This remarkable conducting career spans 30 years and is filled with glittering firsts. Barriers Young has torn down include being the first woman to conduct the Vienna Philharmonic and the first to lead the Opera Bastille in Paris, the Vienna Volksoper, and the Vienna Staatsoper.

Young started her operatic conducting career at the Sydney opera house and was the first woman and youngest appointed Resident Conductor with Opera Australia 1993. Music Director of the Bergen Philharmonic from 1999-2002, Young moved from there to Hamburg where she was both chief executive of the Hamburg State Opera and chief conductor of the Hamburg Philharmonic from 2005-20015. Young has conducted in many other leading opera houses and with leading orchestras on the concert stage.

Fun fact: Young is a renowned Wagner and Strauss specialist and conducted Straus’s Elektra in Berlin while 8 months pregnant with her second child.

Described by the New York Times as ‘a dynamic podium presence’, Xian Zhang won the Lorin Maazel conducting competition in 2002. She was Music director of the Orchestra Sinfonica di Milan from 2009-2016, the first woman to hold such a post in Italy. In 2016 she was appointed Principal Guest Conductor with the BBC National Orchestra and Chorus of Wales, the first woman to hold a titled position with a BBC orchestra. 2016/17 saw her first season as Music Director of the New Jersey Symphony Orchestra.

Zhang is a regular guest conductor with the New York Philharmonic, the London Symphony, Concertgebouw Orchestra and returns to New Zealand to perform with the Auckland Philharmonia in late September. She continues to guest conduct in her native China and is a champion of Chinese composers.