I’m a Star Wars fan and, like the millions of other Star Wars fans, I have seen A New Hope a zillion times. Possibly two zillion. But never like this; with a live accompaniment from the New Zealand Symphony Orchestra.

I had prepared myself by watching John Williams documentaries on YouTube. Williams is the second-most Oscar nominated person behind Walt Disney, and it’s no surprise when you realize the number of cultural touchstones he worked on, even before Star Wars. 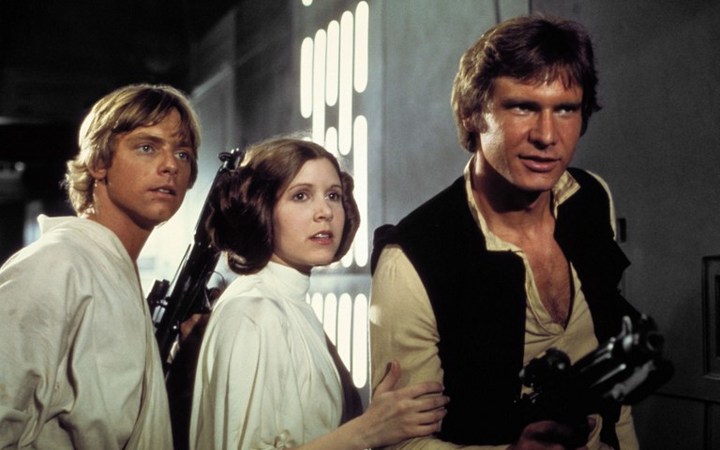 As with all his works Williams creates components for each character and then melds them together. So Star Wars’ main theme that plays over the iconic title crawl is essentially Luke’s theme. But as the piece winds it’s way over the following action scene we hear the Droids theme, Leia’s theme, and, of course, the Imperial theme.

In this way Williams creates his own version of story-telling. Not only do you know who is on screen by the melody but Williams is able to let you know shifts in the characters’ internal motivations. This is used more in the later films when Luke is on screen, but Vader’s theme is playing.

Watching the documentaries gave me an understanding of how NZSO conductor, Hamish McKeich, might go about the task of perfectly marrying live music to a pre-recorded sound track. From our vantage point I could see a monitor in front of McKeich playing the film with a white vertical bar that tracked across periodically, giving him the timing. This is similar to the way Williams recorded the original soundtrack in a studio back in 1977 (though without the digital aids).

The NZSO’s performance was perfect. It was a wonderful experience watching the film but with the music brought to the fore. (Sadly the TSB Arena’s acoustics let the performance down a little with the on-screen voices being too loud at times where we were sitting, while friends elsewhere in the venue couldn’t hear them at all).

I was most interested to hear the section directly after the “garbage masher” scene. This is a piece where the protagonists are split up and the action on screen changes rapidly from foot chases, to gun battles, to quiet sneaking, all building up to the battle between Obi Wan Kenobi and Darth Vader. The NZSO handled all of these quick fire changes perfectly.

Oddly the traditional set up of an orchestra, didn’t suit this performance. So much of Williams’s work is based in the wood-wind section, so often individual performances, usually on Luke’s theme, were hidden behind silent violins. Though when the full orchestra was in flight, it was something to behold.

I should note that the version played was the 'Special Edition'. So certain scenes were longer than the original movie and sometimes whole new parts were added (such as the infamous Jabba scene).

What surprised me was how often the orchestra didn’t play. There are long sections of the film with no orchestral backing. Most notable was a long stretch from the beginning of the Cantina scene through to the escape of Mos Eisley. Also the aforementioned lightsaber battle contains very little music, until Kenobi’s sacrifice. (Note, the orchestra didn’t play the Cantina Band music, possibly due to a lack of steel drums and odd jazz instruments).

Which is why I’d like to also give a small shout out to Ben Burtt, the sound designer for Star Wars, who fills these spaces with sound effects. But effects that sound like music. In the scene where Luke is training on the Millennium Falcon, I strained to see which instrument was playing the underlying rhythm, only to discover the only “music” was coming from the lightsaber.

My sole disappointment was that there wasn’t more. After the film and the applause had died down, someone comedically yelled “encore!” We all laughed, but we also all would’ve sat through the whole thing again, happily.