Gershwin was the main draw card in the final major performance for the Christchurch Symphony Orchestra. Talented Australian pianist Simon Tedeschi stole the show according to reviewer Tony Ryan. But how well did the rest of the programme of works by John Adams and Aaron Copeland add to the event? 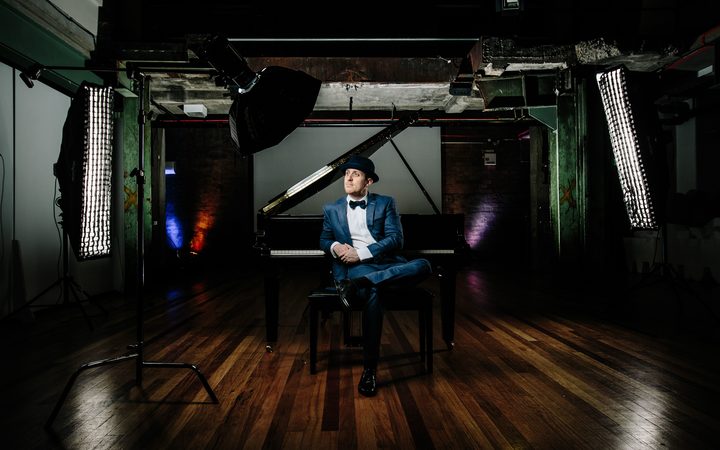 An all-American programme with three works, all of which call for quite a large orchestra, and I have to say, at the outset, that the Christchurch Symphony at full strength with a superb conductor and soloist proved to be formidably impressive.  Although I thought that I’d finalised my highlights from the many concerts that I’ve been to in Christchurch this year, but this Christchurch Symphony concert now definitely has to be in the top three.

The programme began with John Adams’s Short Ride in a Fast Machine and conductor Benjamin Northey really knew how to make the most of its repetitive motor-rhythms, and his pacing of the climaxes leading up to the final frenzy was absolutely spot on. Right from the opening relentlessly metronomic wood-block beats, the Christchurch Symphony gave us a thrillingly exciting Short Ride, with sonorously whooping horns, punchy brass and percussion, and stunningly athletic articulation from wind and strings. It really hit-the-spot with the audience and set the tone for the remainder of the concert.

Then came Simon Tedeschi onto the stage, and he gave us such a performance of the Gershwin Piano Concerto that any comparisons are simply irrelevant. His almost nonchalant spontaneity in the first movement made me think that this is what it would have sounded like if Gershwin himself had been playing it. And he was matched to the hilt by conductor and orchestra; in fact, I don’t think I’ve experienced a concerto soloist integrate so perfectly with the orchestra – they just seemed to be making music together in complete accord – nothing contrived or artificial – everything totally convincing and absolutely mesmerising.

Simon Tedeschi didn’t treat Gershwin’s notated rhythms and articulation as completely “gospel”; he enhanced rhythmic ideas by slightly stretching their written regularity, and he brought so many phrases to life by tweaking the dynamics and just letting the inspiration of the moment dictate his performance.

Then, in the introduction to the second movement we got some equally magical solo trumpet playing from Thomas Eves. The way he used the written notes to express a sort of world-weary sense of resignation was nothing less than astonishing; and every time the trumpet had another solo passage in this and the third movement, we got more of the same irresistible magic. And the roar of appreciation that he got at the end when the conductor acknowledged him was just so deserved.

The final movement was the crowning glory of the performance from both the soloist and the orchestra – and the whole thing was just one of those extraordinary musical experiences that I feel grateful to have been present at. Simply amazing!

And then Simon Tedeschi’s encore of Gershwin’s Rialto Ripples was the icing on the cake – the perfect choice!

Benjamin Northey said that Copland’s 3rd Symphony was the greatest of all American symphonies. For some, maybe it is, but for me, Samuel Barber’s 1st or Charles Ives’ 2nd would probably rank higher on the list. But for Saturday night’s performance of the Copland, the level of music-making certainly didn’t drop from its earlier impressive and classy level for a moment. Benjamin Northey took the opening of the first movement at a more flowing tempo than usual and the whole movement benefited from a sense of forward momentum.

The second movement has some great orchestral effects and the CSO projected them superbly, but, for me, the second and third movements are not top-drawer Copland. That quintessential American sound is certainly there, but it’s not until we get to the transition to the final movement that the level of inspiration picks up. And then, the quiet entry of Fanfare for the Common Man, which Copland had written a few years earlier, suddenly lifts the game to a whole new level.

The programme notes suggested that there are references to Fanfare for the Common Man in all the movements, but it all just sounds like Copland to me. Hints of Rodeo, Appalachian Spring and the Old American Songs can be heard quite easily throughout the work. But the interesting thing that struck me in this performance, was the way that the quiet opening statement of the Fanfare suggested a passage from Leonard Bernstein’s West Side Story, written ten years later. Anybody who can be bothered comparing the opening 30 seconds of Copland’s fourth movement with the final 30 seconds of the finale of West Side Story will surely agree. Bernstein regularly conducted Copland’s 3rd Symphony and his two recordings are very highly regarded. But, even so, I can hardly imagine Saturday night’s performance of the final movement being better done. And this, like everything else on the programme, was the Christchurch Symphony at its considerable best, and certainly up there with anything else I’ve heard this year in Christchurch.

And, on Saturday night, as we sat surrounded by all hose aircraft in the Wigram Airforce Museum, for once the venue didn’t seem to matter, and although the aeroplanes remained grounded, the music really took flight.