Back in Black by AC/DC. It’s not something you’d typically hear on RNZ Concert, but it’s part of the repertoire of classically trained cellist Maya Beiser.

The Yale educated musician, who was raised on a kibbutz, has been described as a “cello goddess” by New Yorker Magazine, the “Queen of contemporary cello” by the San Francisco Chronicle and a “Cello Rock Star” by Rolling Stone. 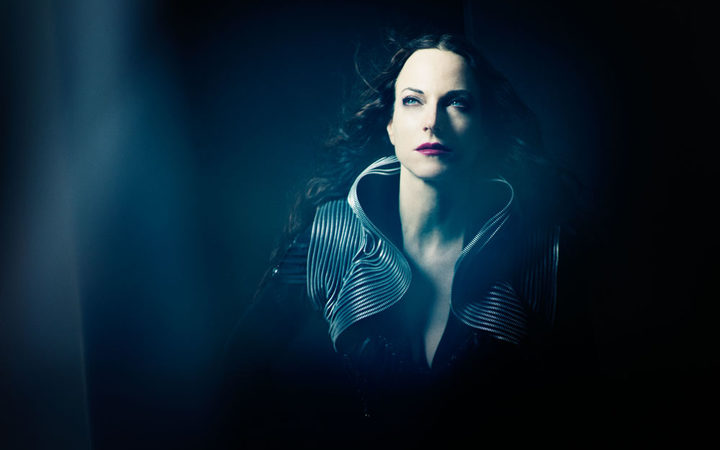 She became a global phenomenon in 2011 after giving a Ted Talk which has been viewed more than 1 million times and translated into 33 languages.

Beiser not only performs classical work but modern pieces by Led Zeppelin, AC/DC and Nirvana. She’s also collaborated with the likes of Minimalist composer Phillip Glass and Electronic musician and producer Brian Eno.

Earlier this year she performed the world premiere of a new arrangement of David Bowie’s Blackstar as part of her residency at the MIT Centre for Art Science and Technology.

But she’s more than a musician, she’s an artist, combining avant-garde aesthetics with thought provoking arrangements.

That non-conformist view of the world Maya attributes to her upbringing.  Since a young age she has identified as someone who was creative which was difficult in an environment where you’re expected to conform. But that didn’t stop her. “Being an artist is about expressing a point of view and questioning everything, so in that aspect I’m very much a non-conformist,” Maya says.

Beiser also doesn’t conform to the traditional conventions of classical music. At her first major concert in Israel, she walked on stage in a ball gown and bare feet. Nowadays she wears sky scraper heels, platforms and leather pants. “The boots were one of the first things that made people in the classical music world say “what’s wrong with her?” she laughs.  “I wanted to create an environment where we were all experiencing something together and to not create those boundaries that you often have between a performer and the audience in the classical music environment.”

Those teenage years also gave Maya an introduction to rock music, in particular Janis Joplin. She took Joplin’s album to her classical music teacher asking to play music like that but was told it wasn’t “serious” music.  But that didn’t stop her. “It was an incredible revelation,” she says. “I wanted to play the cello the way Janis sings.”

Although Maya was a self-confessed “classical geek” at the time, rock music started to dominate her repertoire more than classical music. She found a language in rock songs, and was able to translate favourite songs into classical form.

Led Zeppelin has been a big inspiration for Maya. She incorporated the band’s 1975 track “Kashmir” into her 2010 album Provenance. “Secretly I’d been practicing a lot of Jimmy Page’s guitar solos … figuring out how I could do them on cello and I played around with different distortions and effects,” she says. “I decided to make a multitrack recording [of Kashmir”] … and it became an overnight success. No one cared about the rest [of the album]!”

But some rock songs are harder than others to master on the cello. Maya was reticent to record AC/DC’s “Back in Black”. Even though she loved AC/DC it “didn’t feel right”. But after laying it down in the studio and “sleeping with it” she decided to layer 40 cellos on top of each other to create a distorted effect.

This type of music making takes a lot of experimentation and patience. “Not everything works. What doesn’t work is just to take a rock melody and play it on the cello in a classical way” she says. “That to me defies the purpose… then it’s tame.”

“What’s cool and interesting is to make the music change into the way the cello is. And the cello…. exposes something in the music.”

But it’s not just rock in her repertoire. Bach’s Air (“On a G string”) holds a special place in her heart and she’s added her own twist to the classic. “I have this strong memory of myself lying down on the couch on the kibbutz … listening to Air on G on the turntable,” she says. “It wasn’t just Bach. It was the sounds of the turntable. I made an arrangement for cello and stripped the sound. [I] played around with different old LP sounds to make it close to the memory of sound I had.”