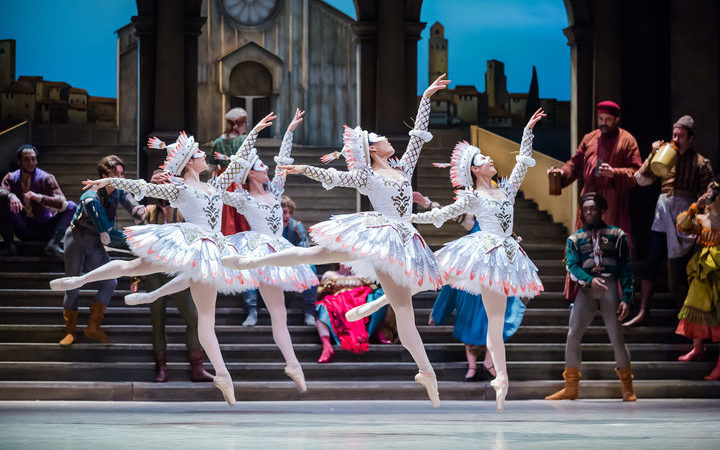 As soon as you hear Prokofiev’s Dance of the Knights you’ll recognise it. It’s one of the most famous pieces, and scenes from Romeo and Juliet, currently being performed by the Royal New Zealand Ballet.

It’s a stunning scene, but what happens if you can’t see it?

Nicola Owen is an audio describer for this season of Romeo and Juliet. It’s her job to commentate on what’s happening on stage, allowing the blind community to experience what others can see. During the ballet she’ll sit in a soundproof room describing the action, which will be transmitted into a small ear piece worn by blind audience members and their companions.

It’s the first time ballet has been audio described in New Zealand, but Nicola has had a wealth of experience describing other art forms including opera and theatre. Each style has its own challenges, with ballet it’s about less being more. “When I’m audio describing opera and theatre it’s [about] working out the little gaps between talking and working out how much can we cram in to explain the visuals,” she says. “Ballet is all gap. It’s all music. The big challenge is how do we pare it back so I’m not just talking for three hours?”

Conveying the poetry of ballet is at the front of Nicola’s mind. “If I just say “jeté, jeté, arabesque, plié”… that’s not going to be a very exciting experience for the audience. It’s [about] trying to capture the essence in every scene.”

Before the ballet starts the blind community, and their sighted companions go on a touch tour of the stage, scenery and costumes. They are also given more information about lighting, set changes and characters. The describers also go into detail about the relationships between characters.

Blind people also have a chance to feel small wooden mannequins which are put into different ballet positions to understand what moves including a plié might look like. They are also encouraged to make the shapes with their bodies to understand how the dancer might appear on stage.

One of the hardest scenes to describe is when Romeo finds Juliet’s lifeless body. “Trying to convey the beauty and the sadness through a description is really challenging,” she says. “That’s going to require some really sensitive descriptions and sensitive delivery as well. How do we make sure we are really explaining in a very sensitive way what that looks like and how that feels?”

Nicola has been describing for six years, first as a side job, then full time when she realised there was more of a need for something like this. It was her blind husband who encouraged her to get into audio describing. “I’d describe what’s on television for him, and he suggested I went along to improve my skills!” she laughs. “My vision is all arts venues could provide something. Wherever blind people go there’s someone who can give a basic description so that they can participate with other people”.

Because audio describing is being offered in more places, it’s allowing the blind community to access arts and culture in a new way. Nicola’s finding it’s giving the community more confidence to speak up about what art forms they want to engage with. She hopes ballet is something they will continue to enjoy. “Audiences are getting a real treat and hopefully it’s a beginning of a wonderful relationship between the blind community and RNZB,” she says.