70 years ago New Zealand Symphony Orchestra played its first performance. Rod Biss was in the audience that night listening to Dvorak’s Carnival Overture, which will also be performed at tonight’s celebration concert along with other music of special significance selected by the players. Rod talks about his favourite experiences with the National Orchestra over the 70 years, in and out of the concert hall. 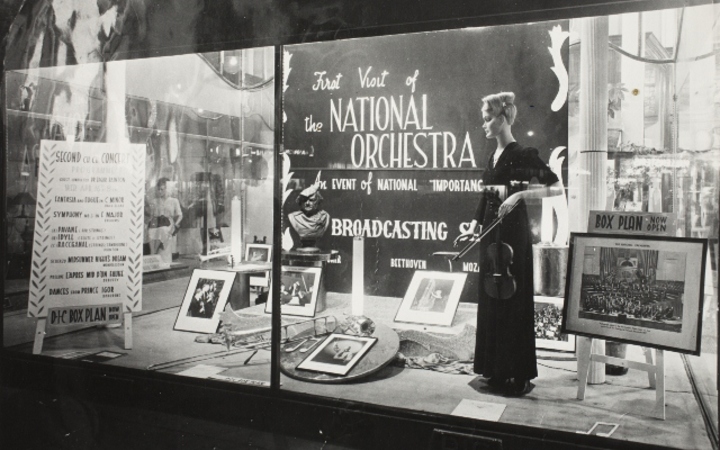 The New Zealand Symphony Orchestra marks 70 years since its first concert this week.

Rod Biss, composer and music publisher, was in the audience in Wellington the night of the first concert. As a 12 year old he convinced his mother to take him to see the new National Orchestra of New Zealand at the Wellington Town Hall. The experience of seeing live music enthralled him, and began a life-long love affair with the orchestra.

The past 70 years have given Rod many highlights, including a gripping performance of Sibelius’ Second Symphony at the Wellington Town Hall in 1950. It was the first 20th century work he’d heard. “It sounded to me like music that could belong to New Zealand,” he says.

A few years later he got chatting to Douglas Lilburn and it turned out New Zealand’s  leading composer felt the same. “Many of the reviews of his (Lilburn’s) music…refer to the sound of Sibelius,” Rod says.

Rod Biss also heard the premieres of many Lilburn works before he met the composer. Lilburn’s first symphony was written during the 40s, but wasn’t performed until 1951. Rod was at that performance too. “The opening of the symphony was a thrill for me,” he recalls. “I (even) bothered to cut out the review and the preview.  I obviously had a realisation that it was a historic event.”

NZSO conductor John Hopkins was influential in finding a true New Zealand sound. “He was keen for New Zealand to establish its own repertoire,” he says. Hopkins commissioned Lilburn’s third symphony, which he felt was a portrait of Lilburn himself and Rod says  “many years later Douglas confirmed that it gives us a picture of what he was.”

The Lilburn symphonies were recorded a number of times and while Rod respects the Hopkins versions, it was James Judd who inspired him. “The Hopkins ones are probably what Douglas would have wanted,” he says. “But James Judd expands them almost in a romantic way.”

Although there are many fantastic recordings of the New Zealand Symphony Orchestra, nothing beats hearing them in a concert hall. In the early days it was difficult to judge how good the NZSO was as there were only recordings of other orchestras to compare them to. But it was when Rod went overseas, that he gained a true appreciation of how world class the NZSO is. “Hearing an orchestra performing live is very different from a recorded performance,” Rod says. “When I returned in 1974 – it was the NZBC then – it was sounding as good as the ones I had heard overseas.

"Then, and now, it’s a very fine orchestra indeed.”