The Art of Etiquette - opera

Art is in the eye of the beholder, but how do you go about showing your appreciation? In Upbeat's new series The Art of Etiquette, we help make art accessible for those who are unsure of what to do.

Is it ok to wear jeans to the ballet? Or boo at your favourite opera villain? Can I eat at an art gallery or go get an ice cream during an outdoor performance? When should I give a standing ovation?

We've gathered a number of experts to help walk us through the etiquette of ballet, opera, visual arts, musical theatre and beyond.

Are you thinking about going to see New Zealand Opera’s The Magic Flute? Maybe you’ve never been to opera before or unsure what to expect? 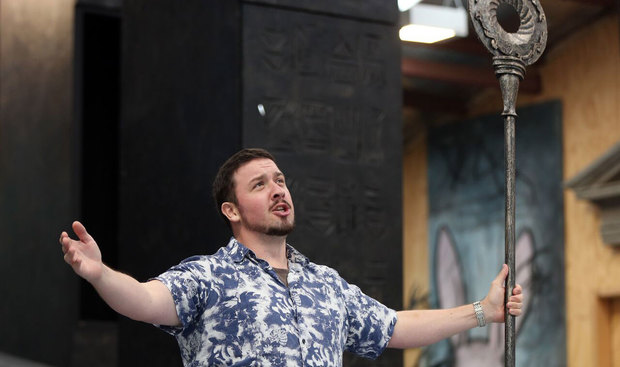 Is opera just for “posh” people?

How do you go from Westie to opera?

It’s not too big a leap, to be honest. From intermediate onwards, the schools [I went to] were 50 percent Polynesian. It took the geekiness away from singing. I’d always sung as my parents had a country music band. When I got to school the First XV were also in the school shows and barbershop. Someone pointed out [to me] “you’re a bit louder than normal” andsuggested I have a go at opera.

Let’s get down to the basics. What should I wear?

I wear jeans, nice shoes, collared shirt and a jacket from suit. Over the last few years, opera has been trying to get a wider audience. There’s been an emphasis [on the message] that you don’t have to wear a ball gown or suit. No one’s going to laugh at you if you wear the wrong thing. But it is a good opportunity if you want to pull out your suit or nice frock. When you go to a premiere you’ll sit next to people wearing full tuxedoes and people in jeans and t-shirt. Wear what’s comfortable.

Can I wear a kimono if I’m going to see something like Madame Butterfly?

Yea why not! It’s your night. My good friend Moses from Sol3 Mio; when his family come to the opera they come in full best Pacific Island bright coloured glory. You can wear whatever you like. You could wear a big black dress like the Queen of the Night (from The Magic Flute) if you wanted to.

Jandals… that’s pushing it a little bit! Opera is a winter sport, so most people wear trousers and shoes.

With it being a “winter sport”, it doesn’t mean you can wear rugby shorts?

Well, in Perth (well-known Welsh bass-baritone) Bryn Terfel turned up to a premiere in singlet and shorts - he was also wearing a Rolex though! There’s one of the greats of opera turning up in what he’s comfortable in. I don’t think anyone cared. If you wanted to wear jandals, wear jandals.

Just like the ballet, if you’re late to the opera you get locked out. What are some tips for sneaking in if you are late?

It does depend on the opera. With the likes of Puccini or Wagner there’s not a lot of gaps in music to sneak in. For Mozart there are a few pit stops where the ushers might let you sneak in. But don’t be late! If you are coming in late, particularly somewhere like the St James where there’s no middle aisle, grab a seat where you can instead of pushing your way to your middle set.

And it’s good to read the programme before coming in?

Yes. Come a little early. Meet your friends. Have a drink. Read the director’s notes and the synopsis. The opera isn’t a surprise. Go in knowing a little about what’s happening.

Most operas are in a different language. How are we meant to understand what’s going on?

Thankfully The Magic Flute is in English. Mozart wanted it to be in the language of the people. There are usually subtitles beside or above the stage. If there are subtitles watch the initial part of phrase from the singer then read the subtitles because quite often you can miss the feeling the singer is portraying. Trying thinking singer first, then what he said. That’s the most helpful tip.

Technology is a contentious issue. Some companies are encouraging people to tweet during a performance, but for you on stage are you for this?

Tweet at the intermission. It’s super obvious when someone touches their phone because you light up like a Christmas tree. We see you as soon as you turn on your phone. It pulls focus. And you’re disturbing people around you. They’ve spent a lot of money on the ticket, maybe parking, maybe dinner. The whole evening costs a lot and they don’t want to be disturbed by your phone. For me personally, I’m aware of social media but I think it’s better to sit and enjoy.

When is the right time to show our appreciation?

It’s a very a cultural thing. Most operas you’re prompted to applaud. There’s always a group of people who know, so don’t be nervous. If you like it, applaud, clap, scream. There are different traditions around the world.

How do I ask for an encore?

If you want to be a little bit French you can yell “bis” (be-s), which is similar to encore in English. “Bravo” is the old standard which is Italian.

Is it “Brava” for women?

It depends how much of a geek you want to be. Screaming “Bravo” at any time is fine. We know what you mean. But depending on what you want to yell.

Is it acceptable to boo at your favourite villains?

In the old fashion opera, it can be fun to boo the bad guy, particularly if he’s really good. But it also depends on the performer. During Tosca last year, Philip Rhodes played Scarpia who is an evil villain. At the end of the performance, he came out and someone booed him because he was so evil. It was such a great moment! He staunched him (the booer) out and it got a big applause and laughter. Booing in general, is an interesting thing.

Is it difference overseas?

Germans work as a group. If they love the singer but don't like production, you can have arias that finishes on a high and no one will clap. They wait until curtain call and they’ll give an extra-large applause. That’s them saying “we didn’t like the scene but we loved the singer”. It’s a strange hive mentality. The applause can turn into unison applause to chanting and clapping and stamping all together. It also slowly joins together and erupts into bigger applause.

What is the worst thing the audience has ever done in a performance?

Heckling! Please don’t do it! Particularly in Italy they give you a commentary; which can destroy a performance.

One thing is that in Mozart there are arias where you lift the lights and the character sings to the audience. In the last scene of The Magic Flute Papageno decides he doesn’t have a girlfriend and wants to end his life. He blows on his pipes three times, giving three chances for someone to save him. The performance I saw, on the second blow a big bass voice yelled out “I’ll take you sweetie”.

It was very funny. As a performer, you have to try and keep a straight face and figure out how to fix the scene! So yes commentary can be disruptive.

And finally, any advice to those who might be going to the opera for the first time this week?

Keep an open mind. Opera is a very simple thing. It’s just storytelling. It’s escapism. Don’t feel like you have to get into the nitty gritty. Just enjoy.